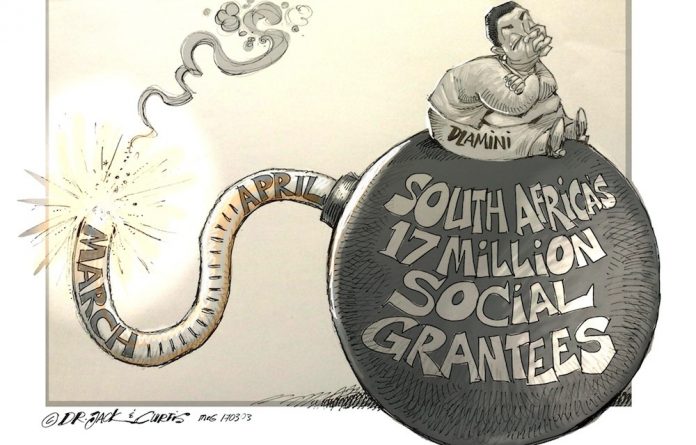 The crisis swirling around South Africa’s system of welfare payments to the poorest third of its people has become a game of chicken.

Social Development Minister Bathabile Dlamini insists that Net1 must continue to distribute the payments after its contract, which the Constitutional Court ruled illegal, expires on March 31. An inter-ministerial task force voided a new agreement between the South African Social Security Agency and Net1, and will conduct future talks with the company. Net1 said if no deal is reached by Wednesday, it can’t guarantee resuming payments April 1.

“To avoid interruptions or delays in payment, any agreement would have to be concluded by 15 March 2017 in order to ensure that payment can be made on 1 April 2017,” Net1 chief executive Serge Belamant said in an affidavit dated March 10.

The Constitutional Court takes up the case on Wednesday when it considers a request by the Black Sash, a human rights group, for the tribunal to oversee a short-term contract for Net1 to continue the payments for a year and supervise efforts of the ministry and Sassa to find a new system after that time. The Post Office said in an application to join the case that it can run the programme within 12 months.

The fiasco is the latest in a series of missteps by President Jacob Zuma’s administration that have curbed growth, dented investor confidence and stoked conflict between government officials and departments. At stake is a system of welfare payments to more than 17-million people a year that’s been a signature programme of the ANC to reduce inequality.

‘Potentially dangerous’
The ANC suffered its worst electoral performance yet in a municipal vote in August, losing control of Pretoria and Johannesburg amid mounting discontent over high levels of poverty, unemployment and corruption.

“I think it’s a reasonable deduction that the ANC derives a lot of support from the social grants,” said Daryl Glaser, a politics professor at the University of Witwatersrand in Johannesburg. “So this is potentially dangerous for the ANC.”

The Treasury must agree to allow a “deviation” from normal procurement processes before talks can be concluded with Net1 on a new contract for the more than R150-billion rand of payments because it wasn’t put out to a tender. While the government is seeking to contain the costs of the new deal within its budget, failure to agree a price with the company could result in millions of people not being paid, and possible social unrest.

“We have to ensure that the payments are done in a legal way,” Gordhan told Parliament’s public accounts committee.

The welfare grants crisis dates back to 2012, when Net1’s Cash Paymaster Services unit was awarded a five-year contract to distribute the payments, which range from pensions to child-care grants. While the Constitutional Court ruled the contract invalid two years later because procurement rules weren’t followed, the company continued making the payments after the welfare agency failed to appoint a replacement.

Opposition parties and labor union allies of the ANC have demanded that Dlamini resign over the risk that the program will be interrupted and her failure, despite the court order, to find a new provider for the payments.

“A lot is going to depend on whether the grants actually get paid to all the recipients,” Glaser said. “If the public is seriously inconvenienced, I think that the ANC is taking itself into dangerous territory.” – Bloomberg