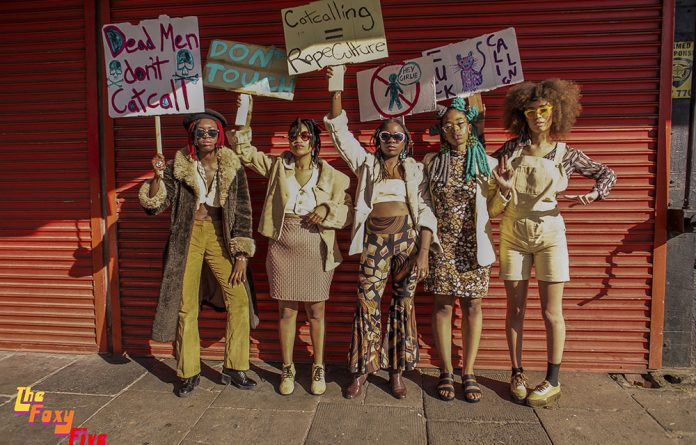 The media response to The Foxy Five, a South African-based web series created by Jabu Nadia Newman, has been curious. Since its debut in July last year, there has been an intense fascination with the series, with complimentary articles about the show appearing in outlets such as Between 10and5 and OkayAfrica.

The unalloyed praise for The Foxy Five seems to be rooted in the importance of representing the “complex identities” of black millennial women in a “relatable” manner. The words “hot”, “exciting” and “important” appear throughout articles on the series. The show’s central concern — to deliver the stories of five young black South African women and their attempts both to define and to live their intersectional feminism — is exciting.

Also praiseworthy is Newman’s assembling of an all-woman production team and the smart use of the excitement around the show to crowd-fund its later episodes.

But what is curious about the praise is the lack of interest in evaluating how well these stories are being told.

Responses to the five episodes available on YouTube are cursory, limited to single lines and often contain the words “humorous”, “witty” and less frequently, “thoughtful”.

The absence of any consideration of The Foxy Five beyond its representational value and its potential didactic function has made for superficial critique that sidesteps the question of whether the team has managed to tell stories that are compelling, well crafted and worth viewers’ time.

The cinematography, perhaps the best element of the show, is also paid scant attention.

Newman, the creator, director and writer of most episodes of The Foxy Five — bar the latest one released this week — is a filmmaker and photographer. The show’s at times arresting imagery is evidence of Newman’s maturity as a visual artist. Aside from jarring fourth-wall breaks that appear in the earlier episodes, the visual storytelling is the show’s clear strength.

Weak writing frequently undercuts the strength of the cinematography. The stilted dialogue and middling acting capabilities of the central actresses (with the exceptions of Nala Xaba and Qondiswa James as Womxn We and Femme Fatal) undermines the charming natural effect of the use of English interspersed with isi­Xhosa and isiZulu.

Tonally, the show is invested in lightness, attempting to intersperse humour into the five’s conversations. Although this sometimes leads to comedic exchanges, the lightness can work against the show, creating unrealistic and awkward moments. For example, when discussing the #FeesMustFall protest, Prolly Pleb, the group’s flower child, briefly relates the story of a lecturer in a car attempting to run her over during a protest. The anecdote, easy to imagine as a real example of the violence students endured during the protests, is relayed breezily and with the cadence of a joke.

The writing is also affected by loose plotting and poor pacing. In multiple episodes, Newman demonstrates her preference for visuals over narrative, sacrificing tightness of plot for striking, yet narratively superfluous, scenes.

The most conspicuous misuse of narrative space occurs in the third episode. Womxn We, the squad’s resident prude and intellectual, is struggling with anxiety while trying to navigate a relationship with her “professor blesser”. After her partner dismisses the value of #FeesMustFall, Womxn We messages the rest of the five and tells them that she needs to meet them “to heal”. What follows is a beautifully shot sequence of the five performing a poem that resonates with the series’ objective of telling black women’s stories, but is only tenuously linked to the episode’s plot.

The characters are described by Xaba in an interview with OkayAfrica as “archetypes”. Although this allows for an easy grasp of what they represent in the show, the women are thinly drawn characters, despite each having an episode that explores their lives in and outside of the group.

This thinness is rooted in Newman’s apparent belief that the most interesting thing about these women is those aspects of their identities that make them especially vulnerable to violence, both systemic and intimate. The result is characters that do not read as complex humans whom viewers can care about or sympathise with; rather they are vehicles for Newman to illuminate important issues operating in the lives of black millennial women.

To assess the quality of the show is to consider the show’s merits as not only a piece of fiction, but also how the show treats its ostensible subject: the intersectional and South African-rooted feminism that animate the show’s characters and how this feminism is used to understand and potentially surmount the struggles the women face.

The Foxy Five is ambitious in the number of issues it presents in the five episodes: sexual harassment, racism in primarily white schools, mental health, blessers, self-care during protests and trans misogyny.

In the show’s latest episode alone, colourism, the difficulty of renting property as a black person in Cape Town and the mixed-race experience of Prolly Pleb are covered as intermingled themes.

Although these subjects reflect the lives of countless South African women, the show often does not attempt nuanced depiction.

five seriously grappling with these subjects.

The third episode once again proves to be instructive. Described as a “must-watch” by Between 10and5 because of its focus on mental health, blessers and self-care during the #FeesMustFall protests, the episode provides only a glancing engagement with these subjects, most strikingly in its treatment of “blessers”.

Early in the episode, it is revealed that Womxn We is in a relationship with her professor, a man who also gives her money and gifts. Rather than giving the complicated power dynamics of these relationships centre-stage, or even investigating Womxn We’s decision to enter into an explicitly transactional relationship, the show simply delivers competing definitions of blessers and one-line views on whether women who are being blessed are beholden to or fighting the patriarchy. The show frequently misses opportunities such as this to have nuanced discussions on topics relevant to young South African black women.

But the series is not without promise. The fourth episode is its best and uses interesting camerawork to supplement a well-written, measured script delivered by the show’s strongest actresses. The episode follows Femme and Lebo, a trans woman, on a night out on the town, from the two of them getting dressed to the night’s ugly ending, in which Lebo is thrown out of a nightclub for using the women’s bathroom.

The cinematography works to illustrate the cross-purposes at which Lebo and Femme Fatale find themselves. We get close, tight shots of Femme’s face as she mistakes her transmisogynistic comment towards Lebo as her simply being overaggressive in her sexual advances. We see intimate shots of Femme’s face as her eyes roam over Lebo to communicate her lust and the disquieting nature of her gaze.

Mlingani Matiwane is magnetic as Lebo, performing her discomfort, dignity and restrained anger without words, but rather with a physical tautness and a silence that is a welcome reprieve from the lengthy tirades and shouting of the other women’s responses to violence. We watch the night become progressively worse for Lebo, who is treated with a casual violence.

The episode ends with Lebo, dismissing Femme’s apology and pointing out the five’s superficial commitment to intersectional feminism and their transphobia, asking them if she is their “trans trinket”. This episode is all the more effective in that the villains are the foxy five. This reversal allows for a more nuanced portrayal of the characters, starkly different from the easy rendering of the group as unquestionably good and perfect in their politics.

The episode is the strongest feat of storytelling produced by The Foxy Five team and a reminder that minimal plots can be of great emotional effect.

The Foxy Five’s first season is almost complete, with one episode left to close out Prolly Pleb’s narrative arc, which, in a particularly clunky use of foreshadowing, will attempt an exploration on mixed-race and coloured identity.

It is unclear whether there will be further seasons of the show, but if there are, the series would be well served by treating the writing as equally as important and not supplementary to the cinematography and its aesthetic. Tighter plotting, considered character development and more nuanced discussions with the issues the series hopes to illuminate would work to elevate the show from being not only important but also well crafted and compelling.