Ramaphosa has everything to play for 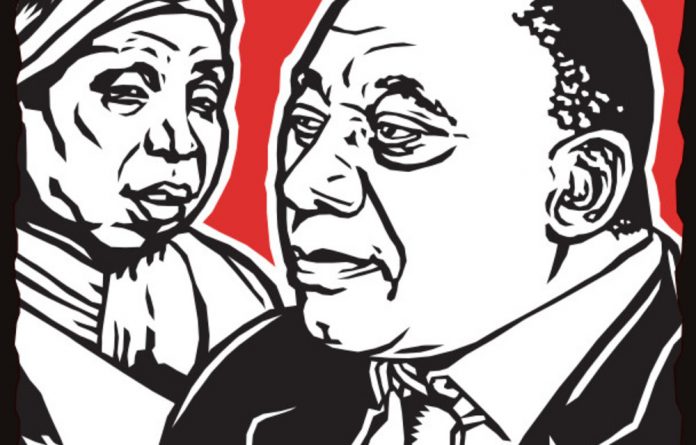 Finally, Cyril Ramaphosa’s campaign for the presidency is out of its starting blocks and is gaining momentum. His chief rival, Nkosazana Dlamini-Zuma, faces a tough, elemental political dilemma: as Ramaphosa cements his hold on the centre and centre-left of the ANC, what should she do?

Because part of her brand is about her traditional ANC values and pedigree — and her commitment to rebuilding unity in a painfully divided organisation — it would be awkward to concede the centre ground to her opponent.

To do so requires her to abandon the hardcore nationalists on the right of the party — most obviously the so-called premier league — which, in turn, runs the risk of losing touch with her most likely route to power.

And therein lies an even more acute dilemma. Dlamini-Zuma’s most plausible route to power involves a coalition of support that is far narrower than that secured by her former husband in 2007 to defeat Thabo Mbeki at Polokwane.

Zuma’s coalition of those marginalised by Mbeki drew substantially and powerfully from both wings of the ANC, but created a fundamentally unmanageable faultline beneath the political edifice Zuma then constructed. His coalition has steadily unravelled in the years since Polokwane, causing massive collateral damage along the way: the ANC’s legitimacy and its capacity for absorbing socioeconomic  pressures with its alliance partners has dwindled.

The left of the ANC and its alliance partners, the South African Communist Party (SACP) and union federation Cosatu, have now firmly nailed their colours to Ramaphosa’s mast. Thus a broader campaign that draws on both wings of the ANC appears to be beyond Dlamini-Zuma’s grasp. Instead, she is  vulnerable to a scenario in which she wins, but on the back of support from those parts of the ANC that she is only now apparently coming to realise are a far cry from the grand traditions of the party that she  purports to espouse.

As a result, since she returned from Addis Ababa and her African Union job, Dlamini-Zuma has,  with increasingly urgency, been striving to recalibrate her campaign and to forge a support base with  a different political hue and character. The ANC women’s and youth leagues make a lot of noise, but she knows that they contribute less than 10% of the electoral college that will determine who succeeds Zuma in the Midrand electoral conference in December.

Dlamini-Zuma opted not to take a position in Cabinet so that she would be free to continue with her street-by-street — or, rather, branch-by-branch — attempt to build sufficient grassroots support that would enable her to win without being beholden to the mongrel mob of charlatans, opportunists and grisly gangsters that has inveigled its way into power in some parts of the ANC empire over the past two decades.

Thus, an important truism about the ANC’s 2017 election emerges as clear as a Highveld winter’s morning: that it is not just about who wins, but how they win and, most critically, how big they win. This will probably decide what happens next.

The ANC is trapped by “slate politics”. As we have learnt during the Zuma years, the composition of the whole national executive committee (NEC) matters a great deal to the power of the president. Zuma won in 2012 with a decisively Zuma-supporting and loyal NEC slate.

Finding the right political alchemy in their respective slates is one of the biggest decisions, if not the biggest decision, the two candidates must take. As things stand, Ramaphosa has more wiggle room in terms of constructing a slate that reflects his values and reform agenda, while also “reaching across the aisle” to some of the parts of the ANC that may not share his social-democratic instincts but whose approach to transformation stops short of the venal populist nationalism that underpins the sloganeering clamour for “radical economic transformation”.

Dlamini-Zuma wins on the back of strong support from the “premier league” and a concoction of other nationalist populists. Beholden not only to a populist “radical economic transformation” agenda, she also finds herself beholden to the  nefarious interests that lie behind these factions. Despite her best efforts, the rot of the Zuma years continues, with barely a pause in the heartbeat, and the ANC totters on towards either a seminal split or a loss of its majority at the 2019 national election. Or both.

Alternatively, she wins decisively with a clearer mandate for change, but still lacks the cross- alliance support necessary to engineer the multisector consensus  necessary for a strategic change of gear in government.

On the other side of the ballot paper, Ramaphosa could also either win narrowly and with an insufficiently clear mandate for the clean-up operation needed, or else he could win with the sort of margin of victory Zuma secured over Kgalema Motlanthe (75-25, as a minimum) in 2012. For Ramaphosa’s leadership and his government, the difference between the two outcomes is enormous.

The worst-case scenario is that Dlamini-Zuma drops out, having decided she doesn’t have the stomach for winning with a dodgy slate and a dubious inheritance but, instead of handing her support over to Ramaphosa, Dlamini-Zuma’s backers transfer their allegiance to a dangerous demagogue from the “premier league” triumvirate who manages to barge his way to power with a combination of raw political muscle and Gupta cash.

At the moment all these scenarios are possible.

Much will depend on the ANC’s ornate and partly opaque electoral system and its complex electoral college. The numbers matter greatly. In turn, they depend on the audit that will be carried out by secretary general Gwede Mantashe and his office over the next few months.

There is everything to play for. And, as Zuma’s power evaporates — and if the Constitutional Court decides that a parliamentary secret ballot is not only permissible under but required by the Constitution, that moment may be a matter of weeks, not months, away — now is the time to consider whether South Africa can escape the toxic and debilitating clutches of the Zuma years.

As recent decisions suggest — the reckless sacking of Pravin Gordhan as finance minister and the desperate, as well as absurd, decision to restore Brian Molefe to the helm of Eskom — Zuma’s cronies, sponsors and beneficiaries fear that time is short.

The decision not to appeal Judge Lee Bozalek’s admirable decision to bring the nuclear energy procurement to a juddering halt because of its numerous procedural and constitutional infelicities is probably the smartest legal choice this government has made for a long while. Yet it is born out of an increasingly anxious imperative to push through the nuclear deal by 2019 at all costs, rather than because of a recognition that there is little or no merit in an appeal that would simply delay things by another two years or more.

Former mineral resources minister Ngoako Ramatlhodi joined the fast-growing club of former Zuma supporters (members of the “Polokwane gang”, as former ANC MP Vytjie Mentor calls them) now to abandon the sinking ship by attesting — like former deputy finance minister Mcebisi Jonas, Mentor and Themba Maseko, the former head of the Government Communication and Information Systems and government spokesperson — to the congealing embrace between the Guptas, their business interests and the political cover provided by the president.

And so the need for the nuclear deal to be finalised in service of those interests became even clearer. And hence, in turn, the restoration of a trusted ally — Molefe — at Eskom, whose responsibility it is to lead the procurement.

This is also evidence of the powerful political economy that has built up around Zuma. Like molluscs attached to a ship’s hull, these political barnacles will prove hard to shake off. They will need to be winkled out of the system if key institutions are not to remain captured and weakened for years to come.

That is why Ramaphosa needs to secure a clear and decisive clean-up mandate. Anything else will not be enough — not for the country and not for the ANC.