‘Bring back what was once mine’ 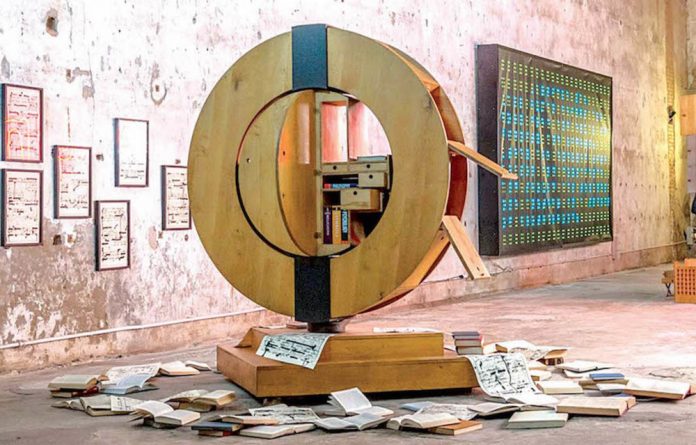 The opening of the debut Nigerian Pavilion at the 57th International Art Exhibition of the Venice Biennale was preceded by a series of unfortunate and unexpected events. The biennale is widely regarded as “the Olympics of visual art”, ergo the biggest art exhibition in the world, where 88 of the globe’s 196 nations are represented.

Recognising what was at stake and the power of first impressions, Nigeria sought to make an indelible one. It was to feature two visual artists, Victor Ehikhamenor and Peju Alatise, and a performance artist, Qudus Onikeku, in an immersive exhibition and meditation on time — Nigeria’s past, present and future — titled How About NOW? and curated by former accountant turned gallerist Adenrele Sonariwo.

Six weeks before the biennale opened, Nigeria lost its first exhibition space. Its two-year best-laid plans for its first biennale entry momentarily fell apart. The landlord of the space, a white European woman, an artist and apparently a devout Christian had expressed reservations about Ehikhamenor’s installation for the biennale, titled A Biography of the Forgotten.

What she was referring to is a proliferation of faces, objects and ancient writing systems rich in Edo symbolism and imagery, consistent in the artist’s work. Ehikhamenor’s entire career has been an enduring homage of paintings, sculptures and perforations celebrating the artistic and spiritual traditions of his place of birth. His installation for the biennale was no different.

The landlord, however, thought his work represented prehistoric black magic.

She had included a clause in the lease contract with the project team organising the Nigerian exhibition that she had grounds to reject proposed work if it “does not conform to the principles of morality and or detrimental to the Christian religion and human dignity”.

She was to be the sole judge of these principles. She revoked the lease. Ehikhamenor is Christian.

“People that were producing work in Europe at the same time Nigerians were producing art decided to label our own ‘primitive’ while theirs is called ‘classic’,” Ehikhamenor said of his motivations to create the installation he was presenting, two days after the project team learnt of the landlord’s decision.

The premise of Ehikhamenor’s installation is simple. It is a tapestry timeline of Nigerian and global art history, which seeks to update it. A Biography of the Forgotten gives honour to the forgotten and admittedly nameless, faceless artists who were creating art for centuries, long before they were supposedly discovered by colonial powers and subject to one of the biggest yet unacknowledged art heists in history.

Ehikhamenor makes use of hundreds of miniature bronze heads created in Igun Street, a world heritage site and ancestral home of Benin bronze casters that still exists. These bronze heads are exact replicas of larger works that sit in museums and private collections all over the world. Ehikhamenor includes mirrors in his installation, a historical symbol of violent and exploitative currency given by colonial powers in exchange for able-bodied men and women, acquired as slaves. These decisions that Ehikhamenor takes in his work and the objects he uses are what the landlord believed to be voodoo, “detrimental to human dignity”.

Ehikhamenor believes that giving credit to whom it is due for the ancestral works that inspired his installation is an important gap to be filled. He believes that, when left vacant, ownership and history of such works can be assumed by someone else.

The weekend before the pavilion opening this was the case — albeit in startling circumstances no one saw coming.

After a hectic two weeks of installing in a new space, Scoletta di Battioro Campo San Stae (miraculously found by the project team’s determined Venetian agents), Ehikhamenor needed a break. The installation was especially difficult because the artist had been creating work to fit with the exact floor plan measurements and dimensions of the first space that was lost. The new space was significantly smaller and Ehikhamenor’s installation had to be redrafted.

To relax, he decided to see Damien Hirst’s exhibition, Treasures from the Wreck of the Unbelievable, showing at the Palazzo Grassi for the duration of the Venice Biennale. The title of the exhibition should have been ominous. One of the works exhibited was a golden replica of the ancestral Ife head created by Yoruba artists of southwest Nigeria. Surprisingly, on all commercial items connected to the exhibition — catalogue and postcards that viewers would take away as mementos — no credit was given as to the origin of the work.

“For the thousands of viewers seeing this for the first time, they won’t think Ife, they won’t think Nigeria,” Ehikhamenor wrote in a social media post critiquing the work that would later ignite a global firestorm. “Their young ones will grow up to know this work as Damien Hirst’s. We need more biographers of our forgotten,” he concluded.

On the same day, Ehikhamenor discovered Hirst’s unbelievable omission in Venice, incredible news out of Abuja, Nigeria’s capital, was making global headlines. Eighty-two of the Chibok schoolgirls kidnapped by Boko Haram had been freed. In April 2014, more than 200 girls preparing for examinations had been snatched from their boarding school dormitories by the group, its most brazen move to date, in its ideological and violent war against Westernisation. Women being educated is evidently one of its high-ranking taboos.

Nigerian Pavilion exhibiting artist Peju Alatise, a self-acclaimed feminist and activist for the girl child, was presenting an installation, Flying Girls, which advocates fiercely and directly against events such as the Chibok girls kidnapping. “The life of the girl child is like a disposable napkin and it is upsetting to me,” she said in an interview describing her state of mind that led to the installation being conceptualised.

Flying Girls is based on the story of Sim, a nine-year old who works as a domestic servant in Lagos. All the while, she dreams of an alternate world where she belongs to no one but herself and can fly.

The installation is also a hopeful, hyperbolic gesture, a call for attention in a larger context to the general plight of the girl child in Nigeria. In the Nigerian constitution, it is legal for girls to be married and bear children before they turn 18. Also, girls are routinely used as shields and bargaining chips by Boko Haram in their war against the Nigerian state.

Alatise desperately wants a future world where this is no longer the case, where girls are allowed to soar as high as they please on the wings of ambition, education and protection from those who seek to harm, use and exploit them. When I pointed out to Alatise, the coincidental and almost prophetic timing of the girls’ release with the presentation of her installation to the world, she said: “We do not speak in vain.”

Temporarily wrecked plans and curiously timed events notwithstanding, the pavilion and the show went on. A believer in the designs of fate might suggest that Nigeria’s participation in the Venice Biennale was destined to happen now, exactly when it did, in response to and for much needed amplification of the events that preceded it and that it addressed.

As if to drum this point home — the urgency of actions in the present — Qudus Onikeku presented a film trilogy “of contemplation, poetry and engagement” titled, Right Here, Right Now, a piece he began working on in December, long before any of the aforementioned events happened.

“I’m not interested in the present, I’m interested in the now,” said Onikeku in an interview with Hyperallergic, a digital art publication. “The present is concerned with the past, but the now is so powerful that it doesn’t have time to think about the past, it’s grabbing at the future. That’s when dance becomes so interesting, it’s constantly inventing the now.”

For Onikeku, whose dance draws energy from Yoruba spirituality, “now” is the most opportune moment to trigger memory, to awaken consciousness, to free the body from the negative history and legacy it is burdened by, like that of the Nigerian girl child or descendants of 18th century Benin artists erased from history.

The global art world has responded overwhelmingly to the alchemy of events that preceded the opening of the Nigerian Pavilion and, more so, to the works exhibited within. Onikeku, who performed at the opening of the pavilion and in an encore days later, is still receiving requests through the pavilion project team to perform again. The pavilion has been ranked on nearly a dozen must-see pavilion lists by leading global arts media from ArtNet to Architectural Digest. It has been critically reviewed by the New York Times and Artsy as an excellent group showing. Rumour has it that one of the exhibiting artists’ installations may soon make a new home for itself in the collection of the Smithsonian Museum of African Art.

Ultimately, as was lead curator Adenrele Sonariwo’s intention, Nigeria has now without a doubt taken its place in the global narrative of contemporary art. Notably, at first and considering all that happened before the pavilion opened, she did not know what hand the country would be dealt next.

“Being the first time we were showing and constraints faced, we were not sure what to expect, how the works would be received. We just worked on putting together the best show we could,” she said. “I suppose the work resonated as it did because our pavilion was speaking in real time to events, developments relevant to NOW.”

With that and a little luck, the rest has literally been history.

END NOTE = The headline is taken from the lyrics of Tangled, an American computer-animated film