A report into the sale of state assets by the Strategic Fuel Fund (SFF) contains damning revelations of how the state entity squandered the state’s oil reserves.

The investigative report has sat on Energy Minister Mmamoloko Kubayi’s desk for months. 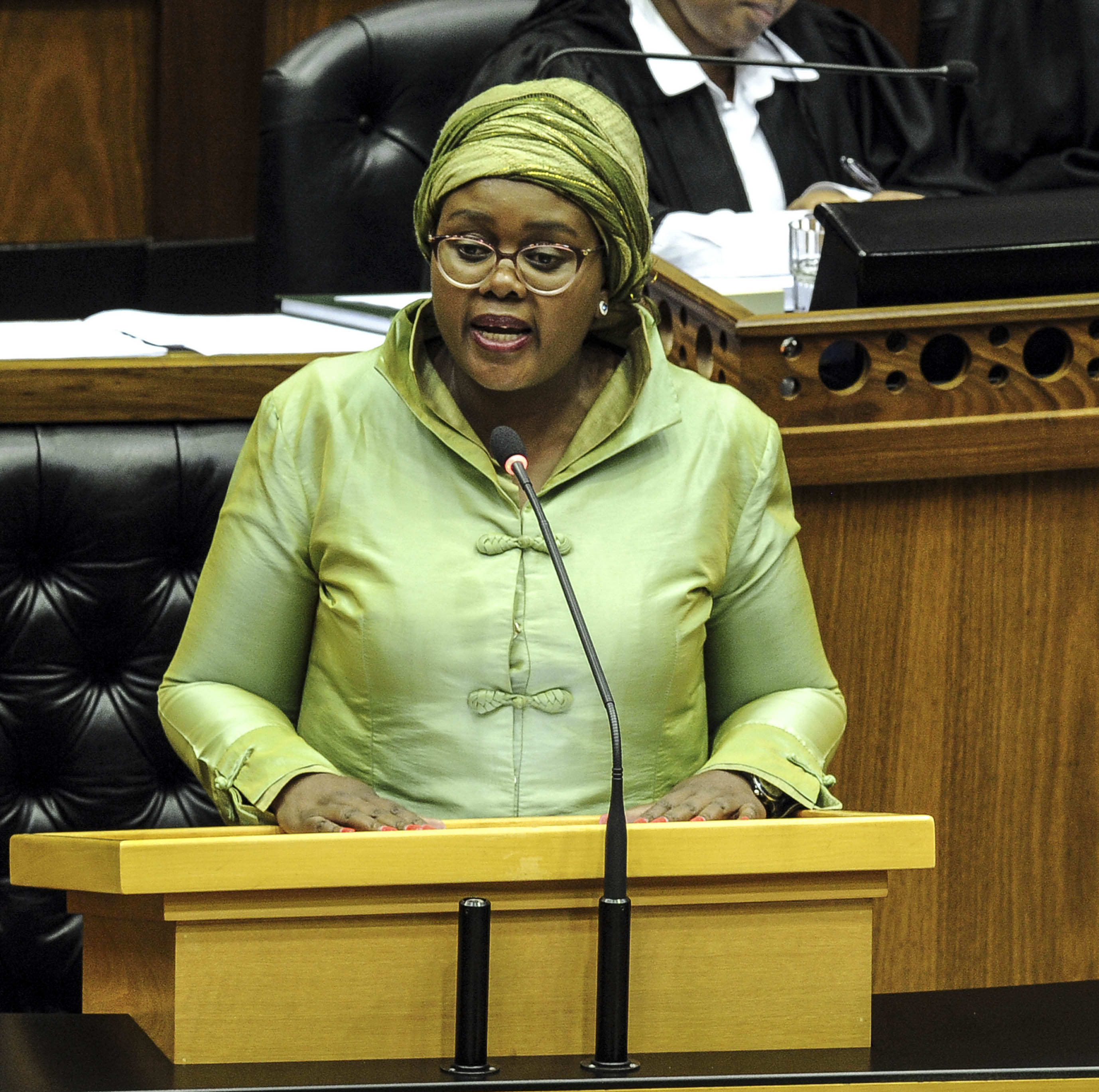 [Brakes: Energy Minister Mmamoloko Kubayi has yet to act on a report into the sale of state oil. (Photo: Nasief Manie/Gallo/Beeld)]

Included in the report by law firm Allen & Overy was a finding that the accounting officer and the board should be held accountable for an invalid R200-million contract.

Kubayi said the matter needed investigation and recommendations from the SFF’s mother body, the Central Energy Fund (CEF), before she takes action.

The report states: “We are of the view that giving of the crude oil to Enviroshore amounted to disposal of the asset … the [contract] appears to be unenforceable in that it appears to have been concluded without adherence to the applicable legal requirements.”

Last year, the CEF commissioned the investigation, which reviewed several fuel trading and sale contracts that had been flagged for irregularities.

One is a R200-million contract given to a small oil solutions company, Enviroshore Trade and Logistics, which was tasked with recovering fuel that had been stored by the apartheid government at the Ogies coal mine in Mpumalanga. Enviroshore is owned by Eugene Makhaye and Arthur Potts.

No money was transferred but Potts and Makhaye were given 300 000 barrels of oil sludge by the SFF in March 2015, which they were supposed to return after six months.

Former SFF chief executive Bheki Gila and acting general manager of commercial Sibusiso Gamede struck a deal with Makhaye and Potts that they could do as they pleased with the oil to ensure the Ogies project continued, according to the report.

But as of December last year, the oil has still not been returned and the SFF has simply disposed of a state asset, the report states.

It is also understood that the SFF has still not received a cent from Enviroshore for the proceeds from the Ogies mine.

Spokesperson for Enviroshore Vuyo Mkhize claims the company is continuing to recover and process sludge, as well as pumping water from the Ogies mine, and that they are meeting performance targets.

“Enviroshore has tried, on four separate occasions, to deliver 300 000 [barrels] of crude oil of the grade specified in its agreement with the SFF, but the SFF [had] not accept[ed] this delivery because its storage facilities were full to capacity and we understand that these will remain full until 2020, at the earliest,” Mkhize added.

In early 2015, the SFF oil that had been “lent” to Enviroshore was sold to Swiss company Mercuria Energy Trading. This sale was accompanied by at least two letters written by Gila and Gamede stating that:

300 000 barrels were to be sold to capitalise the Ogies project and Enviroshore could do as it pleased with it;

Enviroshore would extract 560 000 metric tonnes of crude oil from an SFF asset;

Mercuria would have the benefit of the warranty regarding the “enjoyment of undisturbed possession … and is free to dispose of the crude oil as and when you see fit, without recourse to or agreement from ourselves or any third party”; and

If for any reason Enviroshore could not return the 300 000 barrels of crude oil, the SFF guaranteed the oil sold to Mercuria “shall not be recoverable by ourselves, the government or any other person purporting to represent the government” .

Mercuria then entered into a storage agreement with the SFF to store the same oil. Essentially, the SFF was landed with storing the same oil it had “lent” to Enviroshore.

Besides the “loan” — it is still in dispute whether the oil was sold or would be returned — the Allen & Overy report points to many other irregularities in the contract, including how the SFF had failed to provide documents showing that a competitive bidding process was followed or that the treasury was informed of the contract.

The preamble of the agreements between the SFF and Enviroshore states that the company was “awarded a concession through an open, fair and competitive bidding process”.

The SFF failed to respond to detailed questions about how state assets were “lent” to Enviroshore without authorisation or what punitive steps, if any, would be taken.

The report recommends that the accounting officer and the board should be held accountable.

“If the PFMA [Public Finance Management Act] approvals mentioned above were not procured, the accounting authority of the SFF may be guilty for failing to exercise the duty of care to ensure protection of the state assets and records of a public entity,” the report reads.

The report is also damning about how the contract, without the required authorisation, was structured to benefit Enviroshore — the company gets 70% of the profits of whatever oil it retrieves from the Ogies mine.

The SFF falls under the ambit of the department of energy, and Kubayi confirmed that she had received the report and was waiting on the CEF to make final recommendations.

“[The] CEF board, together with [the] SFF board, will look at all the reports and make recommendations from CEF board. The steps are important so that I am not found to have acted outside the Companies Act,” she said. 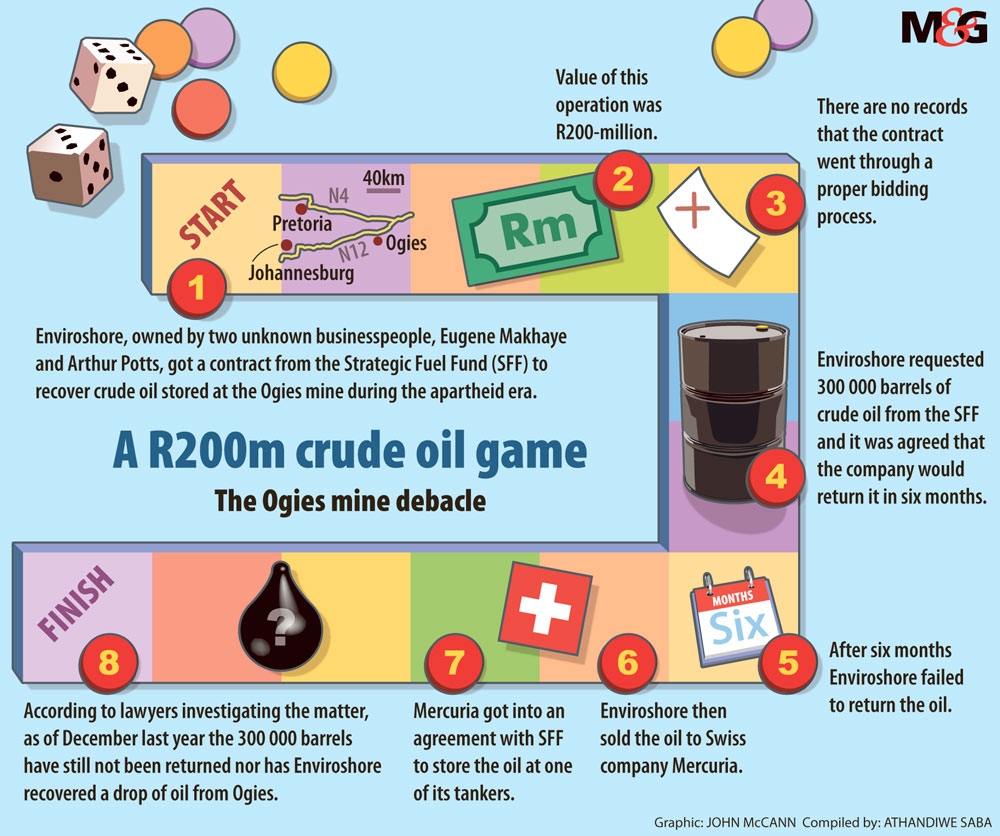 At the end of 2015, the Strategic Fuel Fund (SFF) agreed to sell three companies 10-million barrels of the country’s oil reserves at a bargain price.

The much-awaited Allen & Overy report states that, because of the failures to comply with regulatory approvals from the SFF board, the Central Energy Fund (CEF) and treasury, the parties must be restored to the “positions they were in before the purported entry into such contracts”.

The three lucky companies include Taleveras, which bought four million barrels, and Vitol and Glencore, which bought three million each.

At the time news of the sale broke, the ministry and the SFF denied it was a sale but said it was rather a rotation of stock. It was also said the oil would not leave the country and the SFF had the option to buy it back.

But, according to the Allen & Overy report, the “stock rotation” amounted to “disposal”.

“None of the contracts contains any restriction on the removal of the crude oil from South Africa.”

In essence, the companies could move the oil whenever they felt it appropriate.

Allen & Overy also debunk the myth that the SFF has a genuine right of first refusal.

“To the extent that this right of first refusal was included in the contracts as a crisis mechanism to compel the sale of products sold by SFF to third parties back to SFF when there are fuel supply shortages, it is ineffective and does not achieve its intended commercial purpose.”

Each of the contracts involving the three companies went through a closed bidding process. According to the report, the processes were never authorised by the SFF board, as is required, and the contracts are rendered invalid by the failure to comply with regulatory approvals.

Energy Minister Mmamoloko Kubayi announced in Parliament that a full-scale investigation would be conducted into the multibillion-rand asset disposal.

But four months down the line, Kubayi is still awaiting the recommendations, based on numerous reports, from the CEF.