SwissMarine’s fleet of giant freighters crisscrosses the seas from Southern Africa and South America laden with coal destined for power stations in Europe and other continents.

On any given day in major ports, SwissMarine can be difficult to miss. The hulking vessels linger in Brazil, Panama and India for hours, unloading cargo.

The closely held shipper, formed in 2001 and headquartered in Geneva, Switzerland, is a $1-billion to $2-billion operation that gives no public information on its owners.

Glencore was one Appleby’s top clients.

The organization, at one stage, even had a dedicated room in Appleby’s Bermuda office.

Via its fully owned Swiss subsidiary Sidhalu S.A., Glencore owned 47.09 percent of SwissMarine in 2015, according to documents shared with Appleby and SwissMarine’s bank.

Other owners include SwissMarine’s chief executive, Peter Weernink; a Greek ship owner, Victor Restis, and Macsteel International Holdings BV, a steel trader based in the Netherlands that is a joint venture between units of MacSteel Holdings Luxembourg S.a.r.l., a shipping and trading concern, and steel and mining giant ArcelorMittal South Africa. 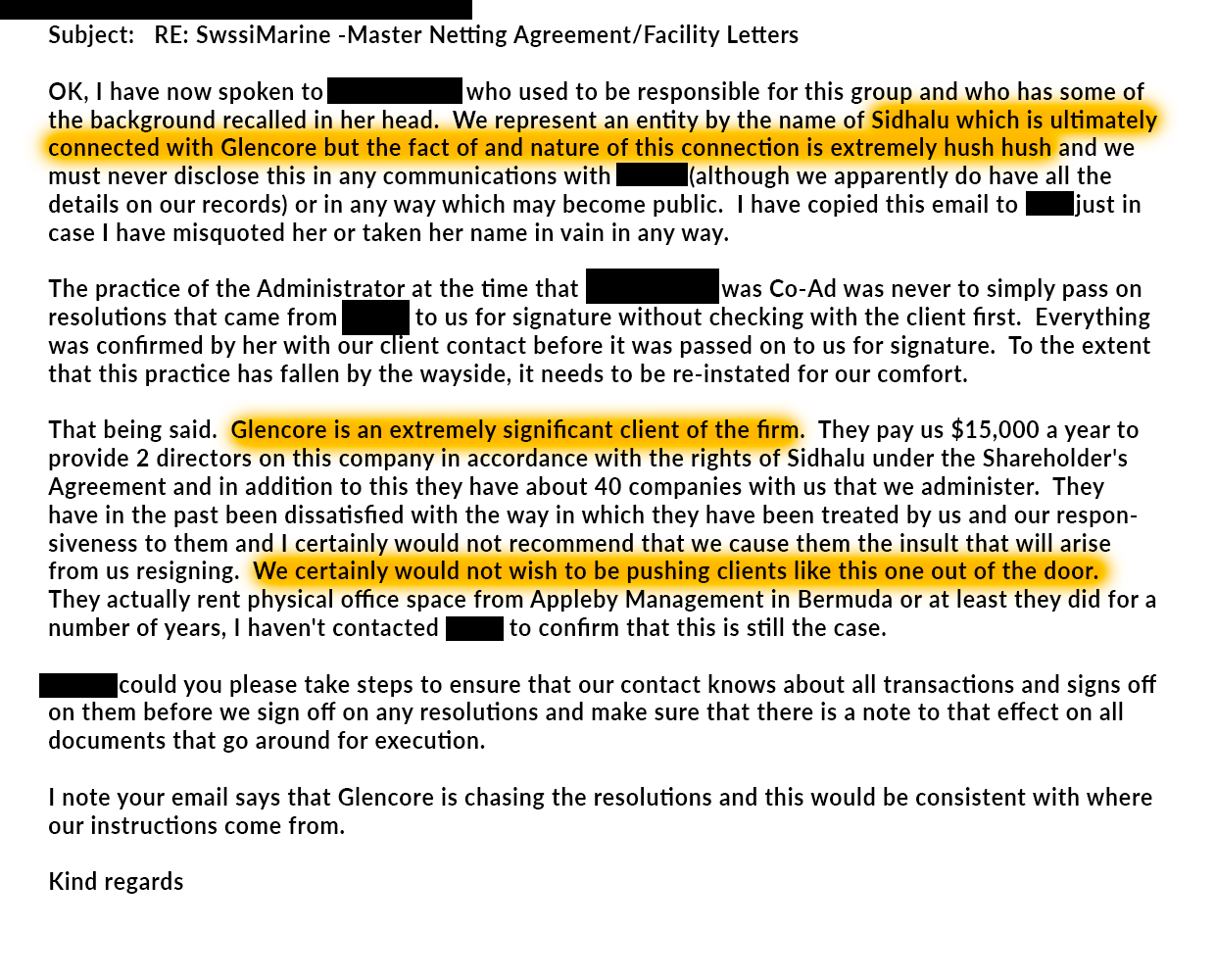 An email from the Paradise Papers highlighting the importance of keeping Glencore’s role ‘hush hush’.

Appleby’s files reveal that its employees worked for years with the belief that Glencore wanted its links to SwissMarine hidden. The employees in Bermuda took heed.

“We represent an entity by the name of Sidhalu which is ultimately connected with Glencore,” wrote an Appleby lawyer in January 2009.

“But the fact of and nature of this connection is extremely hush hush and we must never disclose this in any communications…in any way which may become public.”

Years before, Glencore was so unwilling to disclose its relationship with SwissMarine that it decided against using the Bermuda branch of banking giant HSBC to avoid that bank’s questions about SwissMarine’s true ownership.

SwissMarine opened an account with the Bank of N.T. Butterfield, according to Appleby emails, because it would be “better and easier” given that Butterfield’s disclosure requirements were “more reasonable.”

A reason for the secrecy is not stated in the leaked records, and in response to ICIJ questions Glencore said that it did not “widely disclose” its ownership in SwissMarine “for commercial reasons.”

The shipping company was a big borrower from Glencore-related units – sometimes at high rates. In November 2008, Glencore’s subsidiary Sidhalu lent SwissMarine $22.9-million as part of a $60-million loan from SwissMarine’s four owners. The loan was unsecured and accrued 18 percent interest per year. 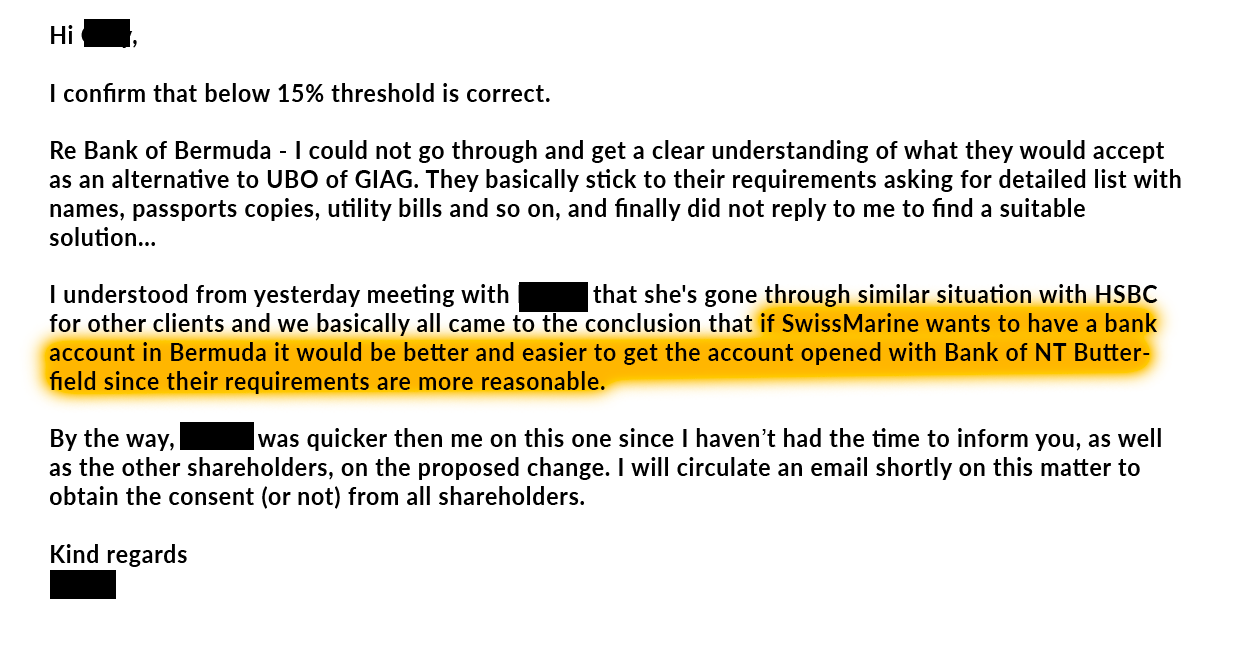 SwissMarine is looking for a bank in Bermuda – with Glencore’s help. (A UBO is Ultimate Beneficial Owner and GIAG is Glencore).

Glencore told ICIJ that the “high interest rate” on the 2008 loan to SwissMarine was made during the 2008 global financial crisis.

The high rate on the earlier loan is notable even given the crisis, when borrowing rates spiked. But experts said the arrangement may have provided SwissMarine with an uncommon cash injection through unusual, if legal, means at a time when the shipping industry was suffering.

“It would be difficult to justify the 18% rate in any context, including the November 2008 financial crisis,” said Nikos Nomikos, professor of shipping risk management at Cass Business School.

In its public reports and in disclosures to the London Stock Exchange, where it is listed, Glencore has never listed its connection to SwissMarine, despite the shipping company’s sizeable revenue, which, according to a confidential SwissMarine annual report shared with Appleby, was $1.9-billion in 2014.

Glencore’s significant shareholding of SwissMarine and its control over operational matters such as opening a bank account suggest that SwissMarine should have been specified by name in Glencore’s recent financial statements, said Prem Sikka, Emeritus Professor of Accounting at the University of Essex.

“Anything worth $2-billion seems material to me.”

But SwissMarine “is not a significant investment for Glencore,” the company told ICIJ, adding that any profit that goes to Glencore is included in Glencore’s consolidated financial statements.

Glencore discloses its beneficial ownership in SwissMarine “where necessary” to banks and tax authorities, the company said.

SwissMarine’s website simply says it is “privately held” and mentions Glencore as a customer among many others.

Glencore’s offshore lawyers, too, appeared somewhat in the dark.

“Now you’ve mentioned Glencore,” wrote in 2004 an Appleby employee who was asked to sign documents in Bermuda on behalf of SwissMarine, “I remember… an element of confidentiality attaching to this structure – I can’t remember exactly what it is, but I know it’s there.”

Will Fitzgibbon
Will Fitzgibbon is a senior ICIJ reporter. He is also ICIJ's Africa and Middle East partnership coordinator.
Facebook
Twitter
WhatsApp
Linkedin