The ANC, in an extraordinary departure from its usual process, plans to hold separate voting sessions for the election of its new president and the remaining top six officials.

The move is intended to limit the influence of predetermined slates on the election outcome and the often divisive winner-takes-all approach that has become characteristic of ANC leadership contests.

The ANC’s leadership election at its December conference in Soweto will be strongly contested. Its usual process is to nominate the top six leaders first and then conduct the voting for all the officials.

Speaking to the Mail & Guardian this week, party spokesperson Khusela Sangoni said the conference would vote on and announce a new president first, and would then allow delegates an opportunity for lobby groups to negotiate among themselves for the remaining positions.

“We’re trying to also discourage a winner-takes-all approach,” Sangoni said. “So if you are really the sort of leadership that we require in the ANC, you must be able to say: ‘Yes, we have won president and arguably we could have won the entire top six but in the interest of uniting the movement can we accommodate names from the others and so on.’ ”

Seven candidates are currently contesting the presidential position but it is likely the final ballot will be narrowed down once the provincial general councils have announced who they will be nominating.

To qualify, candidates need to be nominated by a province or a league, or 25% of the delegates at the conference. So far, Cyril Ramaphosa has been endorsed by the Northern Cape provincial general council and Nkosazana Dlamini-Zuma has been endorsed by the ANC Women’s League. Jeff Radebe, Lindiwe Sisulu, national chairperson Baleka Mbete, ANC treasurer Zweli Mkhize and his predecessor Mathews Phosa have yet to secure any of these.

“When we get to Nasrec [where the conference is to be held], we’re going to have a ballot that has two maybe three candidates, and anybody else that wants to contest at that point will have to get 25% of that conference to raise their name from the floor. It’s a big ask,” Sangoni said.

ANC branches that failed to hold their nomination meetings last week were granted an extension by the party bosses at its Luthuli House headquarters.

All branch general meetings are now expected to be wrapped up this weekend.

By Thursday, Ramaphosa held a commanding lead in the Northern Cape, the Western Cape and parts of the Eastern Cape, where nominations were finalised, as well as in Gauteng and Limpopo.

Dlamini-Zuma’s campaign has gained significant support over the past two weeks after more branches held their meetings and officially endorsed her in KwaZulu-Natal, North West and Free State.

But Mpumalanga has become the ANC’s second-largest province and could swing the advantage either way.

Meanwhile, back at the ANC branches

ANC branches that failed to hold their nomination meetings last week were granted an extension by the party bosses at its Luthuli House headquarters.

All branch general meetings are now expected to be wrapped up this weekend. 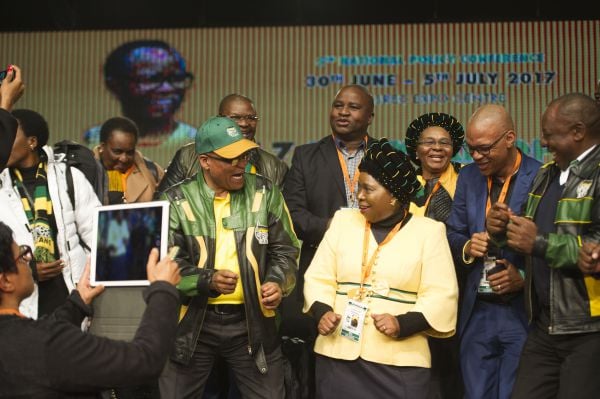 By Thursday, Ramaphosa held a commanding lead in the Northern Cape, the Western Cape and parts of the Eastern Cape, where nominations were finalised, as well as in Gauteng and Limpopo.

Dlamini-Zuma’s campaign has gained significant support over the past two weeks after more branches held their meetings and officially endorsed her in KwaZulu-Natal, North West and Free State.

But Mpumalanga has become the ANC’s second-largest province and could swing the advantage either way.

The battle for the support of the delegates will go down to the wire. The province is known to have supporters of Ramaphosa, Dlamini-Zuma and Zweli Mkhize, but its chairperson David Mabuza’s influence could determine who delegates vote for.

Provincial secretary Mandla Ndlovu said, out of the 471 branches eligible to go to the conference, only 12 branches have yet to hold branch general meetings.

“We are in the process of finalising the numbers and rounding up the final stages,” he said.

As it stands, of the 459 branches that have completed their nomination processes, 187 nominated Ramaphosa, 174 Dlamini-Zuma and 98 nominated “unity”. “Unity” is perceived to be a sign of loyalty to Mabuza.

Both Dlamini-Zuma and Ramaphosa were in the province campaigning over the weekend.

There are more than 100 disputes in KwaZulu-Natal over the convening of branch meetings and nominations. Regional secretaries claim Dlamini-Zuma holds a commanding lead. A total of 806 branches are due to go to the conference and nearly 500 branches have nominated her, according to her backers in the regions.

But Ramaphosa’s lobbyists said, once the ANC’s dispute resolution committee hears their complaints, some nominations may be reversed to favour the ANC deputy president.

The Eastern Cape’s support has already been decided, with Ramaphosa securing a provincial endorsement and the majority of nominations from the branches.

Three regions — Joe Gqabi, Nelson Mandela and Amathole — were expected to provide the bulk of Dlamini-Zuma’s support in the province, but not all the branches have backed their regional leaders’ choice.

Slightly more than 600 branches have qualified to attend the conference and attempts by Dlamini-Zuma’s supporters to split their loyalties have failed. Ramaphosa has received slightly more than 400 branch nominations, according to a senior source in the provincial executive committee (PEC), with Dlamini-Zuma holding the bulk of the remaining nominations.

A member of the newly elected PEC said “the branches are showing the middle finger to those three regions [that back the Dlamini-Zuma campaign, and] this will be evident in the PGC [provincial general council] next weekend.”

Ramaphosa has made a near clean sweep of the Northern Cape, where branch nomination tallies were confirmed at the province’s general council last weekend. Out of 165 branches, Ramaphosa received received 154 nominations. Dlamini-Zuma received 11. “The PGC further resolved that the Northern Cape delegates will not be part of any grouping that seeks to disrupt the conference,” regional secretary Deshi Ngxanga said in a statement.

The Western Cape has nearly 40 branches that have not yet nominated a leader but Ramaphosa is likely to make a clean sweep in the province, with 120 of the 139 nomination meetings backing his campaign.

Dlamini-Zuma has so far received nine nominations, and Lindiwe Sisulu and Mathews Phosa have one each. But the branches with the biggest membership are now at risk of not making it to the conference.

“There’s a big possibility that the big branches won’t make it. They’re struggling to get a quorum,” Western Cape secretary Faiez Jacobs said on Thursday.

In North West, a total of 177 branches are said to have nominated Dlamini-Zuma and 157 have backed Ramaphosa. Nine of the 18 outstanding branches are being disputed.

Dlamini-Zuma is still in the lead in the Free State with about 133 branches nominating her and 86 nominating Ramaphosa. But Ramaphosa backers in the province have complained of nomination rigging and have lodged more than 30 complaints throughout the process.

“If the process can be fair in the Free State, we will get far more than 50% and Thabo Manyoni will be chair of the Free State, but unfortunately there is a lot of manipulation,” said Raymond Sibambani, a Ramaphosa lobbyist in the province.