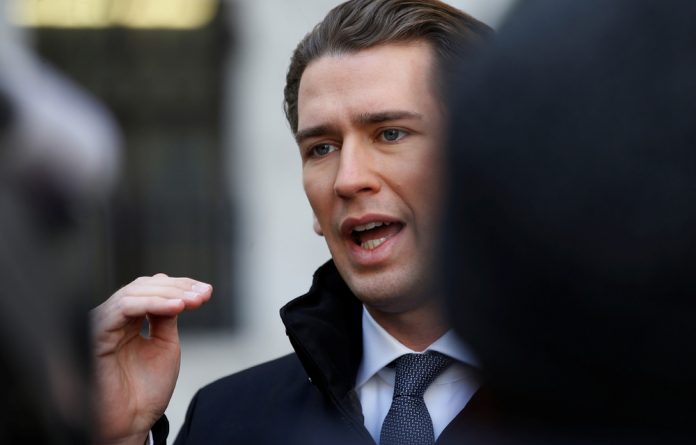 “Whizz-kid”, “Basti Fantasti” and “Messiah” are just some of the monikers given to Austrian conservative Sebastian Kurz, set to become the world’s youngest leader at just 31.

His People’s Party (OeVP), revamped by Kurz as a more hardline “movement”, agreed late on Friday a coalition deal with the far-right that will see him sworn in as chancellor next week.

“Our aims are quite clear. We want to ease the tax burden for people, we want to strengthen our economy, which will bolster our social system,” Kurz said late Friday.

“And first and foremost we want to increase security in our country, including by combatting illegal immigration,” Kurz told reporters.

The takeover of the OeVP in May by “Emperor Kurz” was as swift as it was radical.

First he ended the decade-long unhappy coalition with the Social Democrats (SPOe). Then he rebranded the OeVP and its black party colour as a turquoise “movement” tough on migrants and easy on taxes.

The strategy of “putting Austrians first” propelled the sluggish OeVP to pole position in opinion polls and Kurz to near-rock star status.

Wherever he went in the election campaign, fans sporting turquoise T-shirts would chant his name and women asked if they can hug him.

Observers say there hasn’t been this much euphoria over an Austrian politician since Joerg Haider, the magnetic but controversial far-right leader who died in 2008.

In slick campaign adverts of him scaling the Alps, Kurz promised — echoing his new partners the far-right Freedom Party (FPOe) — to slash taxes and red tape and “return this beautiful country to the peak”.

“The time is now,” read election posters with Kurz staring into the distance.

His appeal as an agent of change is remarkable given that he has been a key cog in the political machine he now seeks to overhaul.

The only child of a secretary and a teacher, Kurz joined the OeVP’s youth wing in 2003.

As its chief, he drew ridicule with a 2010 council election campaign featuring the slogan “Schwarz macht geil”, or “Black makes you hot”.

Kurz posed with skimpily clad girls on top of a black Hummer, the so-called “hot-o-mobile”, and distributed black condoms.

This blunder notwithstanding, the former law student — he never finished his degree —enjoyed a meteoric rise, becoming secretary of integration in 2011 and foreign minister two years later, aged 27.

The move saw the Austrian named one of the most influential Europeans by news website Politico.

The private politician — he’s not often seen in public with long-term girlfriend Susanne — ran a campaign as immaculate as his trademark gelled-back hair, showing a maturity and toughness well beyond his years.

But some critics have accused Kurz of being a “mini-dictator” running the party as a “one-man show”.

Some analysts warn that Kurz’s election will be an “earthquake” for the European Union, despite his pro-European pledge.

At Friday night’s press conference, Kurz and FPOe chief Heinz-Christian Strache appeared to have struck up a personal rapport — despite Strache’s at times vicious attacks in the election campaign.

But some worry that he has given too much away to the FPOe, with the far-right party securing the interior, defence and foreign ministries in the coalition deal.

Political analyst Thomas Hofer said that the fact that all Austria’s security services will now be controlled by the FPOe “will draw some criticism”.

But Hofer added that Kurz wants to ensure that unlike his party’s previous “grand coalition” with the centre-left, this administration will not become gridlocked.

“What he wanted to achieve is that both parties have their real responsibilities. In previous governments the parties blocked each other and Kurz wants to avoid that,” Hofer told AFP.

Infodemic to infowar: The circus of disinformation will spin on