The granular affects of the ordinary

I was six, I think, and excitedly went to preschool. It was a Cultural Day and I was dressed up in a cute yellow and orange punjabi, with a pottu (dot) on my forehead and kajal around my eyes. “An Indian doll,” people say when they see this picture on my wall.

This wasn’t like the Kideo show I watched every morning before coming to school. In one of my favourite episodes, children in South Africa wore their traditional dress and made friends with each other and played on a big jungle gym. The donkey on Kideo asked everyone questions about their culture. I liked it because there was a little Indian girl with a sleek black bob, like me, in this episode.

For the rest of the year (and the years that followed), I would be taunted — simple schoolyard bullying — and I was hurt. I didn’t know why or how things changed, but this little Indian doll became this coolie doll, this go-back-to-your-country doll.

When I was born, there was a type of cruel attachment to the Rainbow Nation. The lie that keeps on giving. It was cruel to expect children to believe that the world welcomes difference and that protection is found in diversity. The national lie of the Rainbow Nation was shattered for me. And after many more exclusions, I came to be more cynical about my given place in the rainbow.

The other day I received an email from a creative arts website.

When I was born — small, jaundiced — my mother received a gift on my behalf. Necklaces (yellow too) that were made for me. One, a mangal sutra, and another a small gold necklace with a Goddess Lakshmi pendant.

I would only come to know about these jewels later in my life. Later on, I also found out their history and how the gold in these chains in some way or form adorned (or were maybe kept hidden by) my ancestors. Gold coins were standard payment for indentured labourers on the sugar plantations of the North Coast, KwaZulu-Natal.

I was reading up on melancholia the other day and — in a rare display of kindness — the academy provided some sense of meaning-making.

“The foreclosure of certain kinds of love suggests that the melancholia that grounds the subject (and hence always threatens to unsettle and disrupt that ground) signals an incomplete and irresolvable grief,” says Judith Butler in her book The Psychic Life of Power: Theories in Subjection.

I cried reading that, I cry now and I’ll probably cry about it forever. In an interview she states: “There’s a kind of grieving that is limitless and without end.” I think I know what Butler is talking about, for once. 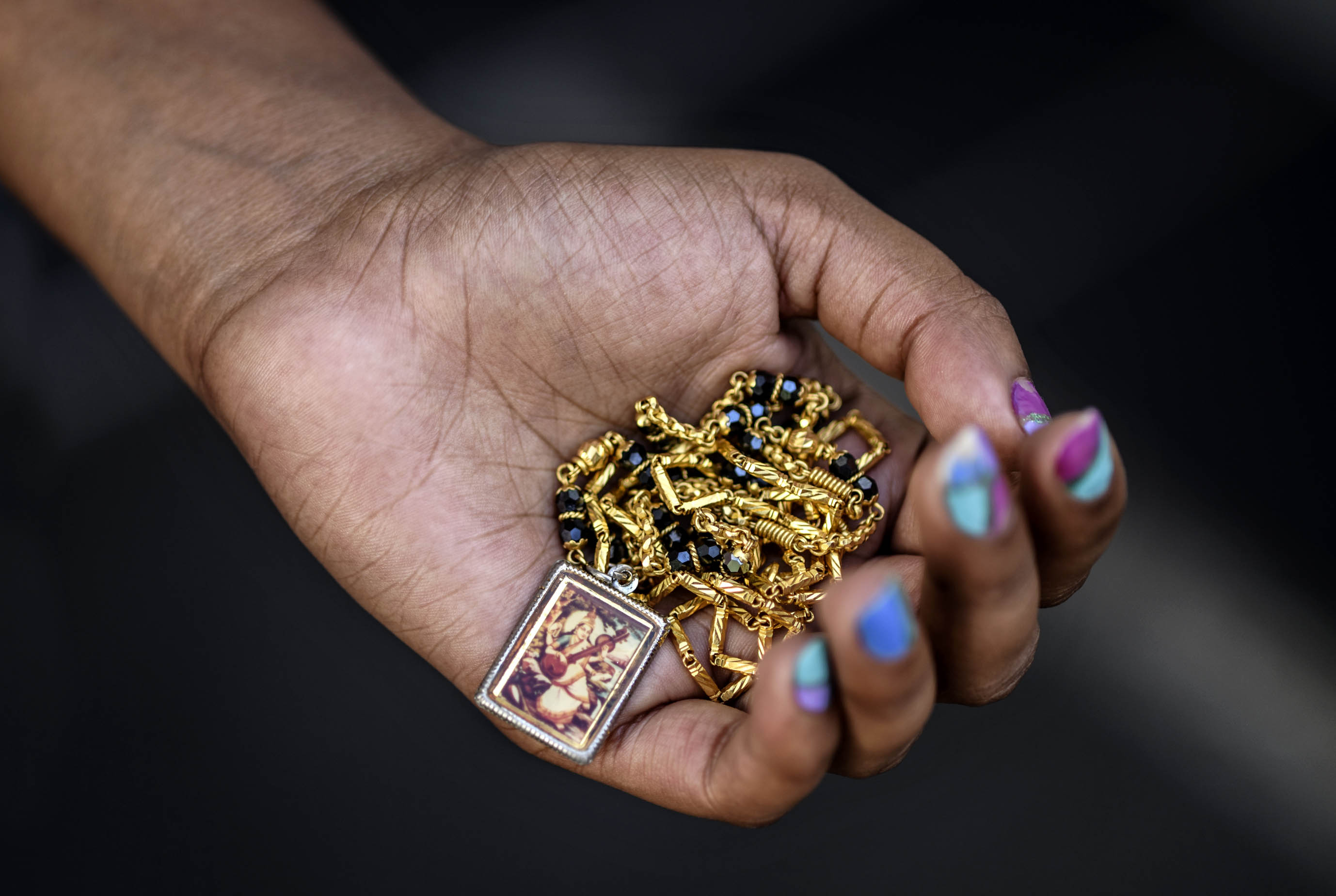 When I moved to this big smoky city, these necklaces became mine. And in that self-possession, instead of feeling freedom or joy or happiness, I felt an expanding sense of sadness radiating from my stomach whenever I wore these jewels. A proud sense of loss. Pride, in the way the necklaces bear witness to my life now — a tangible connection to people I’ve lost and never came to know. The loss, embodied.

There’s a place called Bridal Veil. Two places, in fact. One is 5km outside Sabie, a small logging town in Mpumalanga. Another is just off the Allandale interchange near Midrand in Johannesburg.

I’ve frequented both places but can’t seem to make my mind up: Which one do I like best? Which one gives me what I desire more?

The one I grew up with is a beautiful place — Bridal Veil Falls. Hidden in the lush Sabie Valley, the waterfalls cascade lazily. It never stops. Even when I visited recently, I felt as though I was embodying the childhood memories of picnics and hikes, but in a 24-year-old body.

Another place that doesn’t stop is Bridal Veil Bridge, the main artery into the Mall of Africa. The first time I visited was when it was in its infancy. Day one. I was covering the opening for the Sowetan newspaper. The small reminders of a childhood place made me smile, even though this time, Bridal Veil had much more concrete than I remembered. The constant flow of people every time I visit is oddly comforting. It too never stops.

Nostalgia is a temporal loop, keeping us in and out of time. “It allows for the possibility of histories not yet anticipated” as African literature lecturer Dr Danai Mupotsa would say. I wonder if the developers of Waterfall City have visited the real one? And maybe one day Lone Creek Crescent will be the only Lone Creek that exists?

The past comes into the present. And as my future in Johannesburg extended, so did my trips to this Bridal Veil. I can’t tell whether it’s the sales or the longing for the falls that keeps me coming back. In the future, will I also be coming back?

Romance, consumption, nostalgia jostle for space in my mind. I think about the other Bridal Veil when I’m in one Bridal Veil, and vice versa. So, which one do I like best?

My mother’s name is Charmaine. But Aya calls her Tholsimani. I never knew why, but everyone else seemed to. When I asked (I was already a teenager by then), she said one is an inside name, the other an outside name.

I wanted one too! It sounds so special, secretive even. My dad didn’t have one either, but my mum thinks maybe that was a mistake. She said they didn’t give me one because it was the new South Africa, where you would only need one name. But she did want me to have two. It was my father’s decision to have one.

After some thinking, I forced everyone outside the house to call me Len. I had an outside name (Youlendree), which I made into an inside one instead. A wilful move, but I was no stranger to being known as a wilful child.

I’ve had my arm smacked many times. Most of my misdeeds, I would say, come from a dream of independence and autonomy. As Saidiya Hartman says: “Naming oneself anew was sometimes the price exacted by the practice of freedom.”

My education history is an aspirational, middle-class one; dad works in government, move to the suburbs, go to ex-Model-C schools, get scholarships, go to a liberal university.

But how we arrive at places does matter.

And it matters how we settle, or how we get lost, find our way or come to feel at home.

In 2012, the points coalesced, and lines formed. The path of fortune, of love, of career. It seems the trio of lines converged at the university appropriately known as Rhodes — or they were meant to, at least.

But what happens when the bumpiness of settling in becomes an everyday, ordinary feeling?

O-week, or orientation week, is a story of failure. The forced, violent mixers with the boys residences, the isolation and confusion. The bizarre gentleman’s drinking clubs, harassment and exclusion — despite the dean of students saying this doesn’t exist. We were being orientated. “Life is still easy for us,” the older students would say.

“Where is Barrat lecture complex?” I would ask people, and people would ask me. We didn’t know, but we walked together. In and among the rules set by the university, by rape culture, I found a friend. Another person dangling by a thread. This was a person, who like me, decided to turn away and face a different direction.

We went to dingy nightclubs and danced and got queer looks from our subwardens in the morning. She was my sister-in-arms, and our relationship deviated from the lines of punishment meted out by the university, and turned them into forms of joy.

We are still friends now, albeit orientated slightly differently.

Children must be able to read with comprehension about their heritage