Cape Town without water could have a calamitous effect on South Africa’s economy, economists and water experts say.

On Monday, ratings agency Moody’s placed the city’s credit rating under review for a downgrade, saying the water crisis was credit negative. The agency has Cape Town on a Baa3 rating, which is just a notch above junk status.

Moody’s is the last ratings agency that has South Africa at investment grade and some economists say a downgrade of Cape Town could lead to the country’s rating being cut to junk. Moody’s is expected to end its rating review period after Finance Minister Malusi Gigaba announces the budget in February.

Anthony Turton, a professor at the Centre for Environmental Management at the University of Free State, said a downgrade of Cape Town would be dire. “Suddenly all the talk about are we going to be downgraded becomes a fact. We will be downgraded.

“There’s no way that any foreign investor will invest a cent into a country that can’t supply basic water and energy,” Turton said.

Moody’s associate analyst Daniel Mazibuko said the city was likely to lose that part of its income that it made from municipal water. In 2017, it was R3.9-billion, 10% of its operating income. This loss will be compounded by the operational costs of crisis management policies and programmes and the implementation of water supply projects, he said. 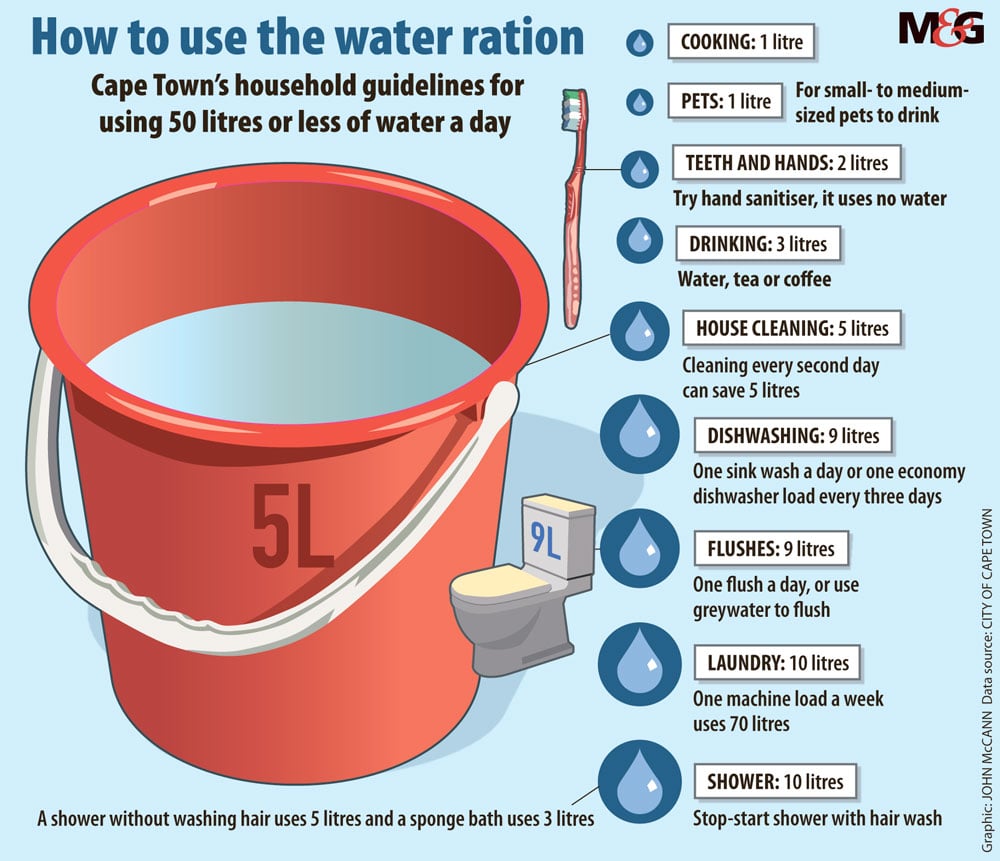 Karen Hesee, an economist at Municipal IQ, said the city’s capital spending would be the worst hit by a downgrade because this would see its borrowing costs rising. “For every rand spent, more will go to paying interest, which could cause a slowdown in actual service delivery spending by making it more expensive or less feasible,” she said.

Day Zero, when the city’s taps run dry, has been moved back by four days to April 16 as a result of a reduction in agricultural releases from the dams in the previous week.

More than 6.7% of businesses in Cape Town are expected to shut down on Day Zero and 11% will send their staff home, according to a survey conducted by the Cape Chamber of Commerce. But 69% said they would carry on with business.

The chamber said the number of businesses surveyed that thought the situation had worsened and was a threat to their operations had increased to 79.4%. Only 51.4% had similar fears when answering the same question in October last year.

Turton said the government faced the challenge of convincing companies that the water crisis would not adversely affect their business operations. “The one option that some companies are looking at is should they relocate from Cape Town to Gauteng just to make their company survive. So the financial implications are more profound than you can think.”

The city has said, come Day Zero, water will be supplied to strategic commercial areas, although this will be monitored to ensure that water usage at these points is reduced.

Turton said deputy mayor Ian Neilson’s first public interview about Day Zero had done little to alay business people’s fears. He was unable to answer some questions about the water crisis in a recorded interview with News24.

“People are talking about looking in that man’s eyes and seeing terror. So, when the DA says ‘Don’t worry there’s still water in the dam’, people don’t believe it. There’s a credibility crisis at the moment,” Turton said.

Janine Myburgh, the president of the Cape Chamber of Commerce, said its survey showed that businesses had gone to extraordinary measures to prepare for Day Zero.

“Business clearly has more faith in rain water tanks, boreholes and new technology than in conventional water supplies. The feeling is that the authorities have done too little too late and the only solution now is a major desalination plant rather than the small ones the city has proposed,” Myburgh said.

Wesgro, the Western Cape’s trade agency in the provincial government, said the drought could have a negative effect on investor confidence in the region and country. Wesgro has created a water war room to mitigate this. It will assist in answering queries from potential investors, local businesses and the tourism trade.

The agency said it had received a handful of queries from new and existing investors about the water crisis but all the potential investors it was talking to at the end of 2017 remained interested in investing in the Western Cape.