One of the poorest municipalities in the country employed hundreds of people on the eve of the ANC’s December elective conference in an alleged attempt to influence its outcome.

Documents in the possession of the Mail & Guardian show how Maluti-a-Phofung municipality in the Free State, which was placed under administration last month, employed more than 200 people in December to work as “assistant general workers”. 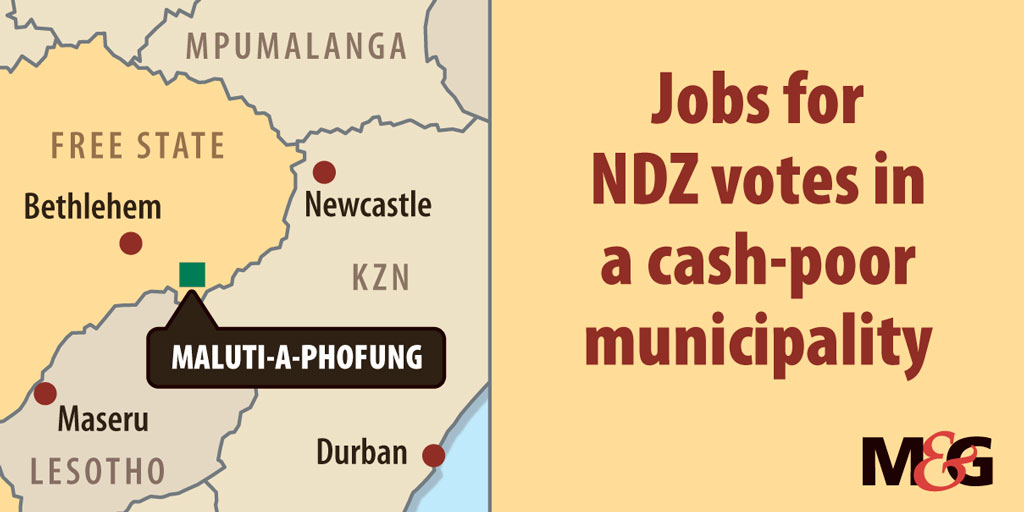 Four of these workers told the M&G that they attended the ANC’s elective conference as branch delegates, and were given jobs as a form of payment for voting for Nkosazana Dlamini-Zuma (NDZ) to become ANC president. But others denied being given jobs for voting a certain way.

“The job was part of a deal that I would go to the conference and vote for NDZ. We were paid before we even started working,” said a worker at the municipality who asked not to be named for fear of being victimised.

According to sources in the municipality, payments were made to more than 500 employees, including the new recruits, on December 15, a day before the ANC conference began in Johannesburg.

Kedibone Sentle, the spokesperson for the municipality, said she could not respond to the M&G’s questions. “The matter is currently under [sic] sub judice,” she said.

The allegations were reported to the Free State Hawks in January by the Democratic Alliance’s Leona Kleynhans. Hawks spokesperson Brigadier Hangwani Mulaudzi said a case had been opened and the Hawks and the National Prosecuting Authority’s specialised commercial crime unit were investigating.

“The matter is still in its infancy stage and no further details can be divulged pending investigations,” Mulaudzi said. An ANC national executive committee member, who spoke to the M&G on condition that his identity was not revealed, said the committee was aware of the claims. “Maluti is not alone in this. It happened in a number of provinces where municipalities employed all these people from branches to vote for particular people they wanted to win at the elective conference,” he said.

The M&G’s investigation shows that 420 general workers were added to the Maluti-a-Phofung municipality’s payroll and were paid in December. Monthly salaries for assistant general workers for the past three months range from R4 071 to R25 603.

The four workers told a similar story — that, in December, they were employed and paid by the municipality to mobilise and vote for Dlamini-Zuma. One said she was afraid she would lose her job. Another named the municipal mayor of Maluti-a-Phofung, Vusi Tshabalala, as the man behind the scheme.

Another told the M&G he was first asked last year to help the ANC win the Metsimaholo municipal by-elections. The next step, he said, was to campaign for a candidate in the provincial elections after the party’s provincial executive committee (PEC) was disbanded last year.

“The person we will be mobilising for is someone in Ace’s corner [outgoing premier Ace Magashule].” But the worker added: “Employment cannot be linked to the ANC conference, considering that branches nominate their own candidates.”

Others on the municipal payroll confirmed that they had been hired in December, were ANC members and had attended the conference but denied being told to vote for any candidate.

Nthabiseng Makubo from Harrismith said the allegations were all lies. “There are people who think these jobs are only for them and their wives, and that’s why they are making up these stories. We were hired fair and square,” she said.

But Tshepo Mokoena, regional chairperson of the South African Municipal Workers Union, said there is no record of how the new recruits were appointed and the municipality has refused to produce any records.

“The employer violated recruitment policies by failing to advertise the positions of the assistant general workers. There is no paperwork for the recruitments of these positions. We found out that people were just paid, even before they started working for the municipality,” he said.

ANC Free State spokesperson Thabo Meeko said PEC members had visited the municipality on Monday to ask about the allegations. “As far as we are concerned, nothing like that has happened but if someone has done this clandestinely, it is wrong and we are condemning it.”

Other ANC members in the Thabo Mofutsanyana region, which the municipality falls under, are furious, saying that, if true, the actions of their comrades are despicable. Tshabalala, the mayor, said the employment of all people was the responsibility of the municipal manager and questions should go to him. But Albie Mokoena, a branch member in the region, said he had been told that Tshabalala had instructed the acting municipal manager to hire certain people “who would support Mme Nkosazana Dlamini-Zuma at the elective conference” and that the instruction came from structures higher up in the ANC.

“The community has been up in arms … saying the mayor must go. They didn’t give jobs to unemployed ANC members; they chose the ANC delegates who would vote for certain people,” he said.

A contract worker who has worked at the municipality since 2014 said the new recruits had gloated that they were paid for nothing else but to vote.

She said that, in November, 156 contract workers met the mayor, who, she said, promised to make them permanent and told them to “hand in our CVs to his office” instead of to the human resources department.

“Come December 15, our payslips were odd. We were all assistant general workers with very little increase. We went to our shop stewards to question this and that’s when [we saw] we had been added to this long list with new workers,” she added.

Spokesperson Ntai Mokhitli said the Free State’s co-operative governance department, which administers the municipality, was “aware of such rumours”.

• It has failed to pay service providers and has paid employees’ salaries late;

• The municipal workers are on an indefinite strike; and

• The municipality is bankrupt.