Two former Comoros presidents are suspected of embezzling millions of dollars from a scheme that sold passports to foreigners to finance development in the Indian Ocean island nation.

A parliamentary report compiled in December accuses Ahmed Abdallah Sambi and Ikililou Dhoinine of involvement in systematic fraud and calls for criminal action against the pair.

“The courts must take up cases of embezzlement of public funds and conspiracy in which presidents and their associates are implicated,” the report said.

The scandal dates back to 2008 when Comoros launched a programme, in co-operation with the United Arab Emirates and Kuwait, to give citizenship to stateless individuals from the Gulf known as bidoons. In return, Comoros, an archipelago between Mozambique and Madagascar and one of the world’s poorest countries, was expected to receive significant investment from the oil-rich nations. 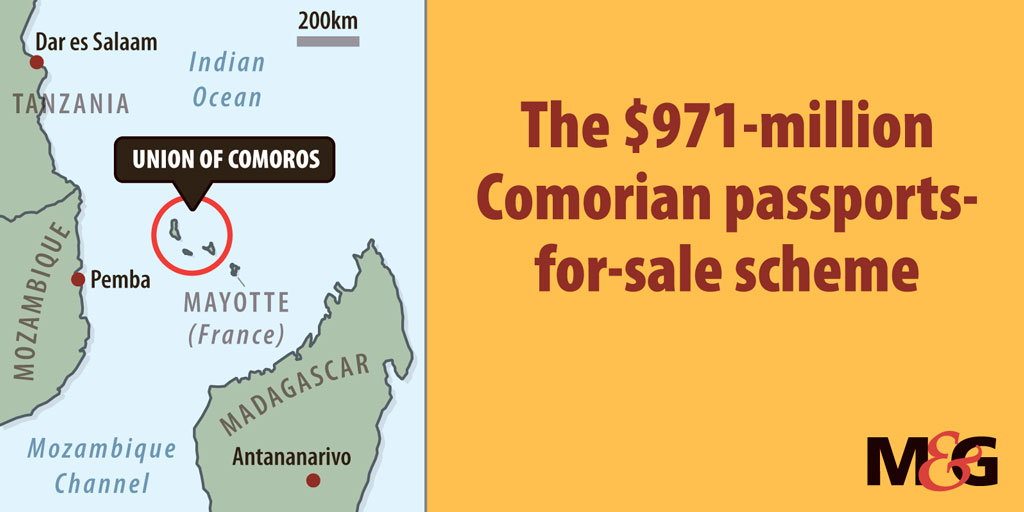 The initial deal agreed that 4 000 bidoon families would become naturalised Comorians in return for $200-million to be used for major infrastructure projects.

Comoros-issued passports entitle holders to visa-free travel to several major economies including Indonesia, Malaysia and Hong Kong. The passports were extensively traded on the black market, profiting “parallel mafia networks, which sold them under the cover of economic citizenship”, the report said.

Sambi’s nephew “was able to go and print as many passports as he wanted” at a contractor’s facility in Belgium.

“The programme generated significant fiscal resources. Unfortunately, a good chunk of the proceeds never arrived in state coffers,” said the report. “The state has ended up a laughing stock.”

The state is thought to have lost out on as much as $971-million, the report said, roughly the equivalent of 80% of the country’s gross domestic product.

Sambi received a “gratuity” of $105-million for signing off on the deal and Kiwan pocketed $29-million for “encouraging” it, according to lawmakers.

The investment-for-passports scheme, suspended by current President Azali Assoumani after his 2016 election victory, had been criticised from its inception.

Sambi and Dhoinine vehemently denied the accusations when they gave evidence to the parliamentary inquiry.

“We had financial difficulties and we were told that the programme could enable us to carry out projects,” Dhoinine told the commission. “But it wasn’t clear, no one knew, not myself in any case, what was happening.”

“President Sambi did not see anything of this scandal,” said one of his former ministers, Ahmed el-Barwane. “It’s a commission intended to get at someone or to silence someone,” he said, adding that Sambi remained a contender for presidential polls due in 2020.

Some fear the revelations will not be followed with concrete action.

“In my opinion it will be buried,” said an adviser to Assoumani, who spoke to AFP on the condition of anonymity.

The report was submitted to the president last week, the federal Parliament speaker, Abdou Ousseni, said.

“Our role was to understand what had happened. What follows is down to the executive and the judiciary,” he wrote in the government-run Al-Watan newspaper. — AFP