No relief for the Komape family

The family of Michael Komape did not hear Judge Gerrit Muller say the word “dismissed”, rejecting their damages claim for pain and suffering.

They were running late, and arrived about five minutes after he finished delivering his judgment in the high court in Polokwane. Instead, Michael’s parents, Rosina and James, flanked by their two eldest children, were met by a sea of journalists’ clicking cameras outside court six. Officials from advocacy group Section27 approached them to break the news to their clients.

During the trial in November, Rosina was the first to take the witness stand. She told the court of the harrowing discovery she made on January 20 2014, when she saw the hand of her youngest child, Michael, protruding from a pit toilet at Mahlodumela Primary School. He had fallen into the pit, drowned in faeces and died. She fainted after seeing the hand. She testified how for months afterwards she would dream of the little hand calling her at night.

On Monday, just over two years after Section27 brought a lawsuit against the department of basic education and the Limpopo department of education on behalf of the family to claim R3-million in damages for the death of Michael, the court finally gave a judgment.

It dismissed the family’s claim for grief and constitutional damages and made an order for the state to pay for future medical treatment of Michael’s twin siblings, Maria and Onica, 17, to an amount of R6 000 each for six sessions. After being briefed by attorneys from Section27 about the judgment, pain was etched on the faces of Rosina and her eldest daughter Lydia.

Michael was in school for only three days as a grade R pupil when he died. He went to the toilet during break at about 10am and did not return to class. At 4pm his body was retrieved from a pit toilet.

The family’s claim was for the emotional trauma they suffered after his death, constitutional damages and past and future medical expenses as a result of impaired mental health as a result of shock. His parents also claimed for funeral expenses, and Rosina also claimed for loss of income.Last year, the state paid R135 000 towards funeral expenses, loss of income and future psychological fees.

Speaking on behalf of the Komape family, Lydia told the Mail & Guardian that the judgment came as a shock. She said the family were now pinning their hopes on an appeal. Section27 has already indicated that it was considering approaching the Supreme Court of Appeal.

“Appealing the judgment is our only hope now. If this was a murder case, it would mean that we would spend our lives in jail for something we did not do,” said Lydia. “It is so painful to be honest. It has taken us back to the day when Michael died. It is so heartbreaking. We have been publicly insulted and humiliated.”

Lydia said it was only after logging on to social media late at night and seeing the reaction of people about the judgment that she found comfort.

“I told my parents that people were against the judgment on social media and it only then did we start talking,” she said. “If there were people who supported the judgment we might have doubted ourselves, but the majority of people criticised the judge … Hearing that many people were behind us gave my parents comfort, strength and a bit of hope.”

But the family is grappling with how they are going to tell Michael’s other siblings about the judgment, a task that Lydia said was not easy: “It is hard for us to tell them because we don’t know how they will react. Maybe in time it will be easy to tell them but for now we don’t have the strength.” 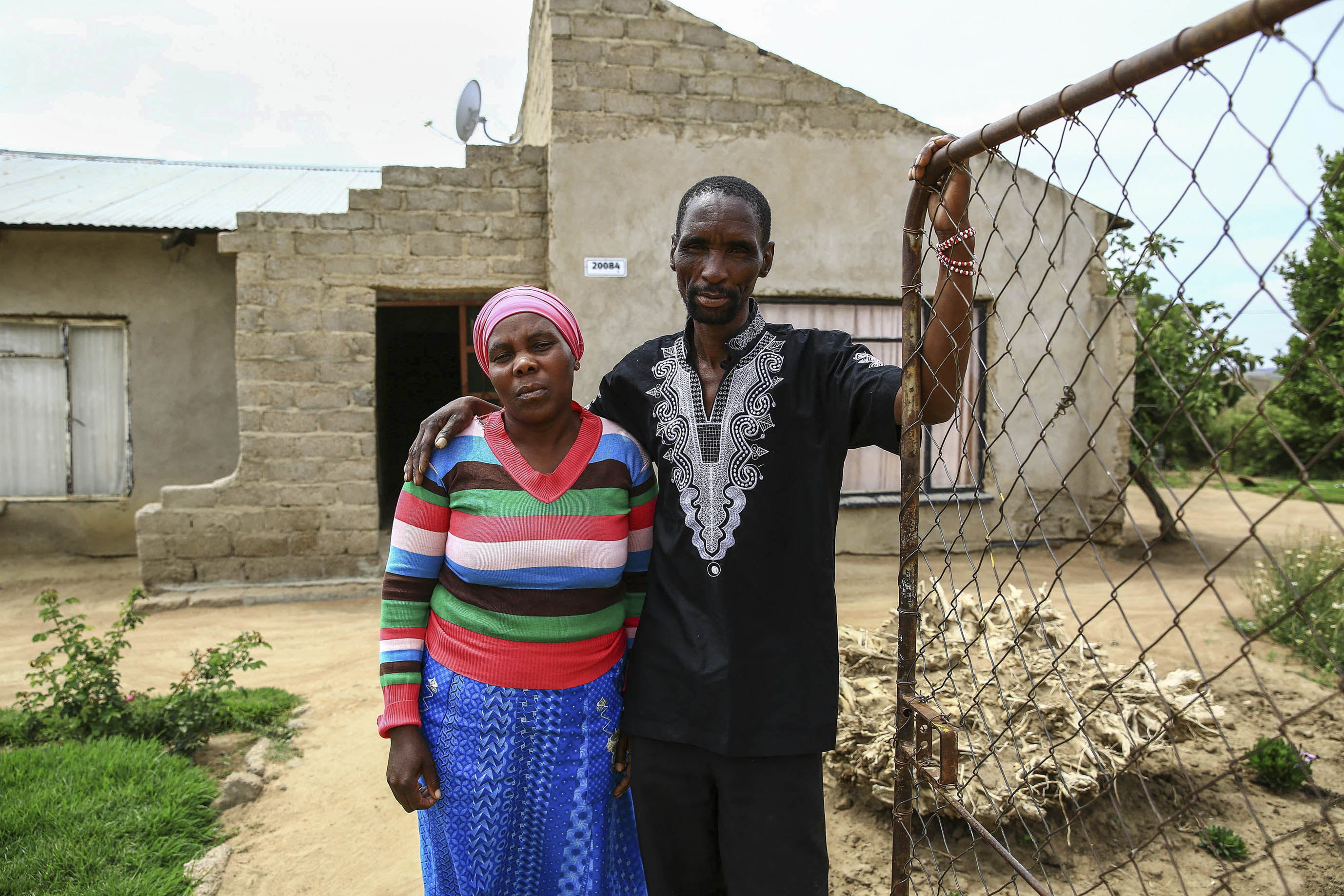 [Pain: James and Rosina Komape are still shocked by the death of their child. They were compensated for funeral expenses, loss of income and psychological treatment. (Simphiwe Nkwali, Gallo Images)]

Lydia said one of the reasons the family wanted to appeal was that Muller had not made an order that Michael’s other sibling, Moses, 13, get counselling. She said Moses was the one who most needed counselling — more than the twins.

“He was the one who was affected the most by Michael’s death. He went to the same school as Michael and he was forced to go back to that school and pretend that nothing happened. All of us, even the twins that the judge ordered [should] get counselling, did not suffer as much as Moses,” said Lydia. “Even now when we talk about Michael he still cries.”

In his judgment, Muller tore into the evidence given by an expert witness, clinical psychologist Steven Molepo, who had counselled the family. Muller said Molepo’s report made no mention of a diagnosis of grief. He further said that the family’s lawyers were unable to prove that anyone in the Komape family suffered from grief as a “recognisable psychiatric illness due to the death of Michael”.

“A claim for grief, which caused no recognisable injury, cannot be justified as a psychiatric injury … It will no doubt lead to bogus and unwarranted proliferation of claims for psychiatric injuries and pave the way for limitless claims for every conceivable cause of grief,” reads the judgment.

Muller said damages could only be awarded for grief if there was a “resultant recognisable psychiatric lesion or illness”.

“Grieve [sic], as any other recognised psychiatric injury caused by foreseeable wrongful negligent conduct, must be proved by expert psychiatric evidence,” said the judge.

Muller agreed with the family’s lawyers that the provincial department had failed in its constitutional duty to provide safe toilets to rural schools in the province and that this had resulted in Michael’s death.

“The photographic evidence adduced revealed distressing, dangerous and poor sanitary conditions at a large number of rural schools … The evidence also showed that there are safe and affordable products available in the market for use by children. It is disturbing to learn from the evidence that funds allocated to [the] second defendant [the Limpopo education department] in annual budgets were not utilised for the purpose budgeted for. It is clear that, due to lack of political will, no effort was made to better the situation at schools, which the second defendant was well aware of.”

The family was claiming R2-million in constitutional damages but this was dismissed by Muller, who instead ordered a structural interdict requiring the department to report back to court, as “the only appropriate remedy that is just and equitable, which will effectively vindicate the Constitution”.

Muller said the claim for constitutional damages was not the “appropriate remedy”.

“I am not persuaded that punitive damages can be claimed as appropriate relief. If such a claim is successful the Komape family will be over-
compensated, on the one hand, and on the other, [it would] not serve the interests of society,” reads the judgment.

“The best interests of all learners at schools with pit toilets must take preference. It is the only means by which the state will be compelled to take active steps to provide the lacking basic sanitary requirements to learners in those schools.

“It will, no doubt, be a mammoth task for the state to undertake. But that cannot deter this court from ordering the state to comply with its obligations in terms of the Constitution.”

Basic Education Minister Angie Motshekga is expected to hand the results of an audit of schools still using pit latrines to President Cyril Ramaphosa in the next few days.

This is according to department spokesperson Elijah Mhlanga, who spoke to the Mail & Guardian this week after the judgment was made in the Michael Komape case in the high court in Polokwane, Limpopo.

Ramaphosa instructed the audit after the death of five-year-old Lumka Mkhethwa of Luna Primary School in Bizana, Eastern Cape, more than a month ago, who also fell into a pit latrine.

Motshekga was also told to formulate a plan to eradicate pit toilets at schools throughout the country within three months.

Mhlanga said Motshekga met provincial MECs of education about two weeks ago and told them to verify the provinces’ existing figures so that the plan can be compiled.

On Monday, Judge Gerrit Muller ordered the department of basic education and the Limpopo department of education to provide the high court in Polokwane with the names of all schools in rural areas with pit toilets, the estimated period required to replace the pit toilets and for the report to reach the court by July 30.

“We believe that we will be able to give it to the president in the next few days or so,” said Mhlanga. “It will also be costed. But of course now the judge says we must also put timeframes but the president [had also asked for timeframes]. Basically, the president wrote the judgment. We are going to comply with that.”

Mhlanga said the department would contact the treasury to source more funding so that pit toilets can be replaced within three months.

He said infrastructure backlogs for Limpopo alone needed R3-million, and with the department’s funding cut by R7-billion over the next three financial years, it was going to be difficult to meet the provinces’ needs. — Bongekile Macupe