An SMS allegedly sent by Patricia de Lille in her time as Cape Town mayor to influence the appointment of a city manager has now materialised.

In the report compiled by Democratic Alliance chief whip in parliament John Steenhuisen, the party says De Lille was accused of sending an SMS to a panellist on the selection committee to influence the reappointment of Achmat Ebrahim as city manager.

The SMS purportedly from De Lille reads: “I want to keep Achmat so score him highest. Thanks.” 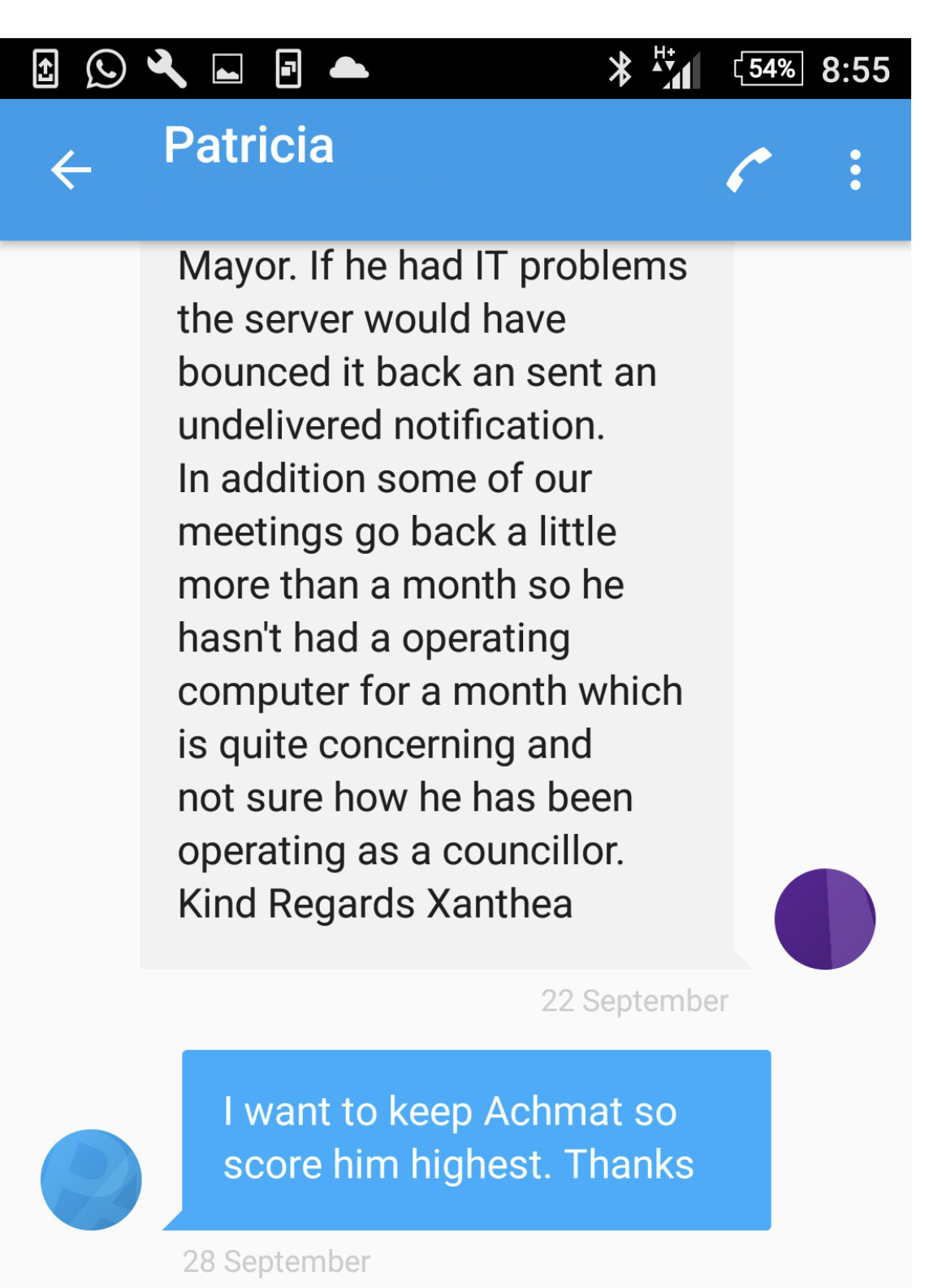 The Mail & Guardian has seen the SMS, and the recipient, Xanthea Limberg, the water and sanitation mayoral committee member in De Lille’s office, confirmed it was sent to her by De Lille on September 28 2016.

“I received the SMS as I was sitting in the room with the rest of the panel members and the first applicant walked in the room and sat down for the interview,” Limberg said.

“Mr Achmat Ebrahim was the last candidate that we interviewed.”

Limberg says she did not respond to De Lille’s text message.

“I was honestly shocked at that very moment,” Limberg said. “I did not respond at all because I believed it was highly inappropriate.”

Limberg then said that she reported the SMS to the party, and it was included in the federal executive’s investigation into De Lille. Limberg recounts a saga where DA city officials, including herself, became increasingly concerned by De Lille’s leadership and raised their issues with the party in a series of meetings in early 2017.

Before, it was not known who had made complaints against De Lille to the party — which was among the concerns De Lille raised in terms of the veracity of the party’s evidence against her — but now Limberg has revealed she was one of those initial councillors who had filed a complaint against De Lille.

“The very day that it happened I shared it with other colleagues, and when a collective of people engaged the party to convey our concerns about Patricia I also shared the SMS,” she said.

“The discussions with the party about our concerns happened over multiple meetings in early 2017 and when the party then set up the formal Steenhuisen enquiry, I formally handed over the SMS.”

The M&G sent a screenshot of the SMS to De Lille and requested comment, but she had not responded at the time of publishing. This story will be updated to reflect De Lille’s comment if and when the M&G receives it.

A week ago, De Lille’s lawyers drafted court papers to compel the party to submit the SMS to the court along with other documents the party used to make the allegations in the Steenhuisen report.

The Steenhuisen report was compiled after a subcommittee of the DA’s federal executive had received complaints from its Cape Town caucus members about De Lille. The subcommittee was led by Steenhuisen.

The SMS was one of the key pieces of evidence De Lille had wanted, as well as a 30-page letter by Cape Town caucus deputy leader JP Smith that, according to the Steenhuisen report, details allegations of bullying in De Lille’s leadership style. Ebrahim resigned earlier this year from his position as city manager.

De Lille’s court action to take the Steenhuisen report on judicial review and for the party to submit the full record may now be cut short. The federal executive’s cessation of her membership means the report can no longer be used in internal party disciplinary processes against her, because these processes no longer apply to her.

De Lille, however, has filed court papers to interdict the party from ceasing her membership so that she can challenge the report and the allegations that were made against her.

“I will suffer enormous personal prejudice should interim relief not be granted. Apart from losing my job, it will mean that I will not be able to continue with the two court cases against the DA because I act in those cases as a member of the DA. It will further mean that I will also not be able to defend myself in the disciplinary proceedings against me and clear my name in public. The reason for this is that a party cannot discipline someone who is no longer a member of that party,” she said in her founding affidavit.

Her case will be heard on Friday morning, where the DA will also present its arguments.

The number was edited out of the SMS in order to protect the identity of the parties involved.