Historical repression and a lack of service delivery have been cited by some political movements as being responsible for an upsurge in coloured nationalism. Most recently, housing protests in Cape Town and the mooted renaming of Cape Town International Airport have seen organisations such as Gatvol Capetonian being at the forefront of violent, racist confrontations with Xhosa people.

At the other end of the upsurge, controversial politicians such as former Western Cape premier Peter Marais and Patriotic Alliance leader Gayton McKenzie are part of a collective that is trying to consolidate coloured people into a voting bloc ahead of the 2019 elections.

Three meetings among organisations representing coloured people have been held across the country since April, with the latest taking place in the Southern Cape three weeks ago, the Mail & Guardian has learned. Apart from McKenzie and Marais, the groups at the meeting included the Independent Civic Organisation of South Africa (Icosa) and Khoisan Revolution, which claims to represent the Khoi, San, Griqua and Nama tribes.

“We’ve identified 39 political parties that fall within that category of a broad coloured and indigenous electoral bloc. That movement has the potential to score victories that are impossible for us alone,” the Griqua royal house’s high commissioner, Aaron Messelaar, told the M&G.

But many see the secessionist group Gatvol Capetonian, with its claim that Eastern Cape migrants in Cape Town are to blame for a lack of service delivery from the government, as a threat to the overall cause.

On Monday, Gatvol Capetonian’s Fadiel Adams arrived with the Khoisan groups at a public hearing in Cape Town to pledge support for the renaming of the city’s airport as Krotoa International Airport.

“The first Xhosa person came here in the 1900s. We’ve been here for 40 000 years,” Adams proclaimed at the hearing, encouraged by cheering from the Khoisan activists and seemingly oblivious to the fact that many Xhosa people are descendants of the Khoi nation.

The Economic Freedom Fighters has called on the government to honour late liberation stalwart Winnie Madikizela-Mandela by renaming the airport in her honour, and the South African Communist Party has put forward Chris Hani’s name.

“This airport will be named Krotoa or there will be war! You hear me? War!” Adams shouted at the hearing.

Although some members of the Khoisan royal houses repeated the threat of war, others disagreed with the Gatvol Capetonian approach.

Last week, the M&G revealed how Adams and Gatvol Capetonian chairperson Ebrahim Davids had been travelling around Cape Town to agitate for protests and show support for residents of traditionally coloured areas where people have seized land illegally. 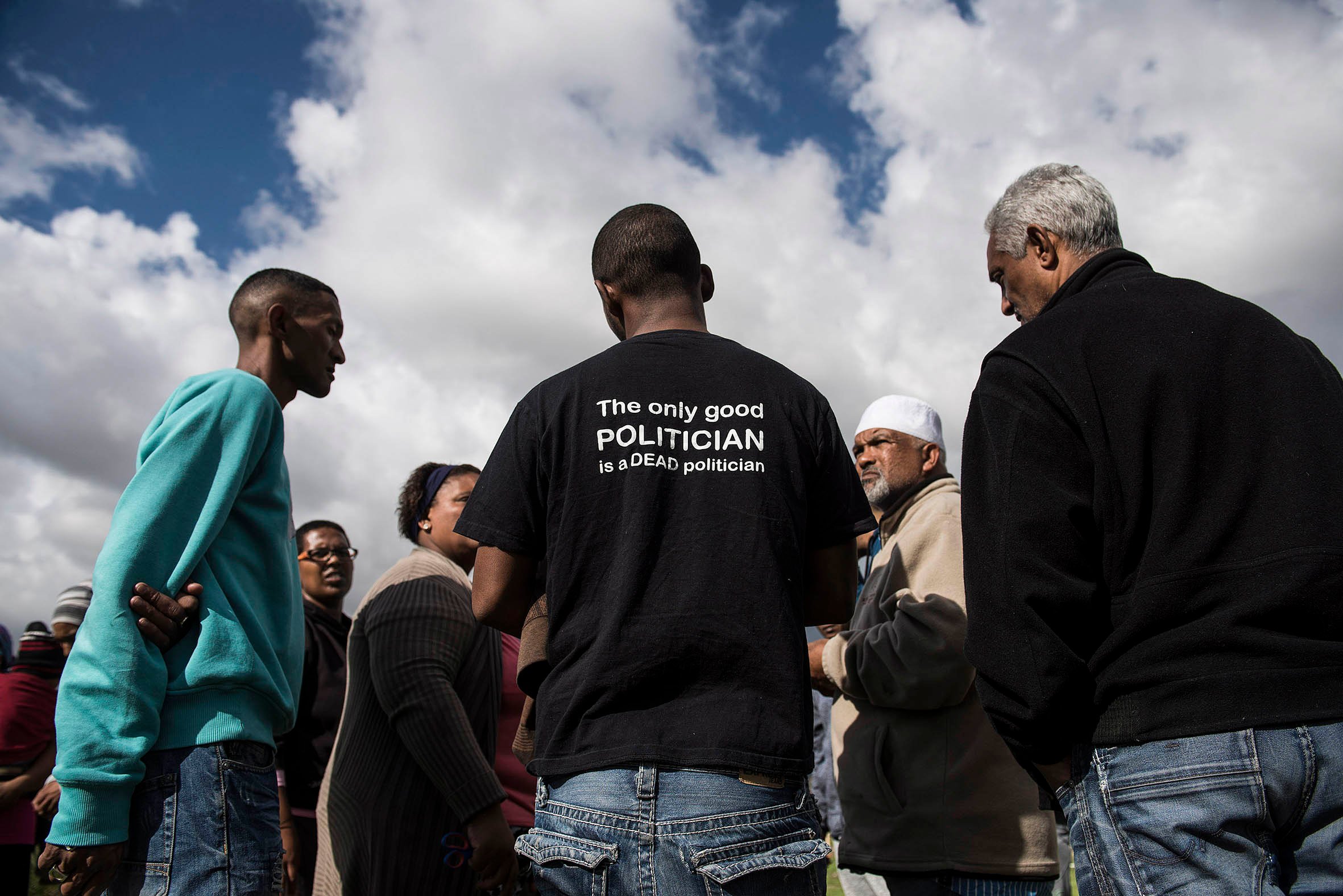 Davids’s efforts to spark a “coloured revolution” date back to 2011, when he stood as a ward councillor candidate for the Cape Party in the local government elections.

Led by secessionist Jack Miller, the Cape Party has called for a referendum to be held to allow the Western Cape to form its own country. This week, Davids was quoted making similar statements on behalf of Gatvol Capetonian, but the group claims he was misquoted.

The proposal to rename the airport Krotoa was brought by Marais, who said his Brown Empowerment Movement had gained traction among coloured people because of this campaign.

But Marais also sought to distance himself formally from Gatvol Capetonian and the Cape Party.

“The Cape Party and Gatvol Capetonian and myself have nothing in common. I made it clear that I do not support their call for secession,” he said, before agreeing with the Gatvol Capetonian group’s claim that the government is prioritising black residents over coloured residents.

“We are being bullied and shut up, or fear being accused of racism. We don’t invade land and put up shacks. We stay in backyards; we don’t try and make a spectacle of it by putting up shacks in open fields and let everybody immediately feel pity for us and demand houses,” Marais said.

But any talk of building a coloured voting bloc was being stifled by big egos and conflicting agendas, said Camissa Movement for Equality chairperson Jerome Lottering.

“There are attempts at getting unity, but at this stage it’s not going to happen with the kind of views we have. The kind of people leading this thing are not mature enough to let go of their egos,” he said.

Civic organisations started mobilising coloured people across the country in 2014, Lottering said. A protest in 2015 to stop a black principal from being appointed at a school in the predominantly coloured area of Davidsonville, Johannesburg, morphed into housing protests across Gauteng, he said.

In the Northern Cape, the campaign to recognise “first nation” tribes in the Constitution has given birth to powerful civic organisations such as Khoisan Revolution and the Kha-Mai Independents Coalition.

“This is what democracy has taught us. You must stand up for your own rights. In terms of the voting population in the country, we have the biggest numbers in the Western Cape and Northern Cape,” Kha-Mai leader Nicolas Henry said.

Henry acknowledged that, because more coloured organisations across the country have begun working together, people’s anger had unfortunately been directed towards their black working-class neighbours.

“I won’t condone such an act but when it comes to fighting for your own piece in this country, you have to do something to get what you want. But I’m not for it,” he said.

The Western Cape is currently experiencing a revival of 1980s-style civic organisations, including the Bishop Lavis Action Community (Blac), the Water Crisis Coalition, the Backyard Dwellers Association and the Housing Assembly.

Blac representative Victor Altensteadt said activists are now trying to dispel what he called a tribalist Khoi and San message, and a racist Gatvol Capetonian message.

“These ‘coloured’ leaders just want to get their share of the tribalist piece, hence someone like known gangster Ernie Lastig [Solomon, the alleged former leader of the 28s gang] is also a ‘tribal leader’. As for Gatvol Capetonian, they are nothing but useful idiots fomenting a racial civil war,” he said.

Lottering said their cause faced similar problems in Gauteng.

“For me, it’s something very personal. I cannot condone any kind of racism even though I know how racist our people are. I’m not blind to it but I cannot be associated with it.”