Zim rugby team off the streets

Rugby Africa and the Tunisia Rugby Union have issued an apology to Zimbabwean rugby team, the Sables, for the poor standard of accommodation booked for them and has provided the players and management with a new hotel.

The Sables, along with their coach, Peter de Villiers, refused to stay in the booked accommodation in Tunisia because it was reportedly in disgusting condition.

Pictures emerged on social media showing the team members sleeping on the street. In addition, the team was allegedly held up at passport control for six hours due to them not being able to pay €600 for their confiscated visas.

Zimbabwean rugby fans were outraged at the treatment of their team in Tunisia ahead of their match in the Gold Cup on Saturday.

David Coltart, Zimbabwe’s former minister of sport, was appalled at the situation. He took to Facebook to voice his complaints: “It is time to restore our national pride.”

Executive member of Rugby Africa Khaled Babbou says this situation was an accident as Rugby Africa prides itself in managing the event effectively and having proper infrastructure and accommodation in place.

This disturbance was not meant to derail the Zimbabwean team for their upcoming match, he insisted. “I can assure you that there was absolutely no intention to destabilise our opponents,” Babbou said.

The team has been resettled into better accommodation and Babbou assured that management “will make every possible effort to ensure they have a good preparation ahead of Saturday’s match”.

The president of Rugby Africa, Abdelaziz Bougja, said that all accommodation arrangements are signed by the six participating unions and need to meet certain regulation standards. Bougja said it was unfortunate that these requirements were not met in Tunisia and will ensure that they are in future.

However, this event has not led to mistrust between Rugby Africa and Tunisia. Tunisia Rugby Union have been “long-term partners” and “hospitality matters to them and they have taken this issue very seriously and are rectifying it,” Bougja said. “Player welfare is at the heart of our preoccupation.”

Bougja thanked all six unions participating and wishing the teams luck for their upcoming match. 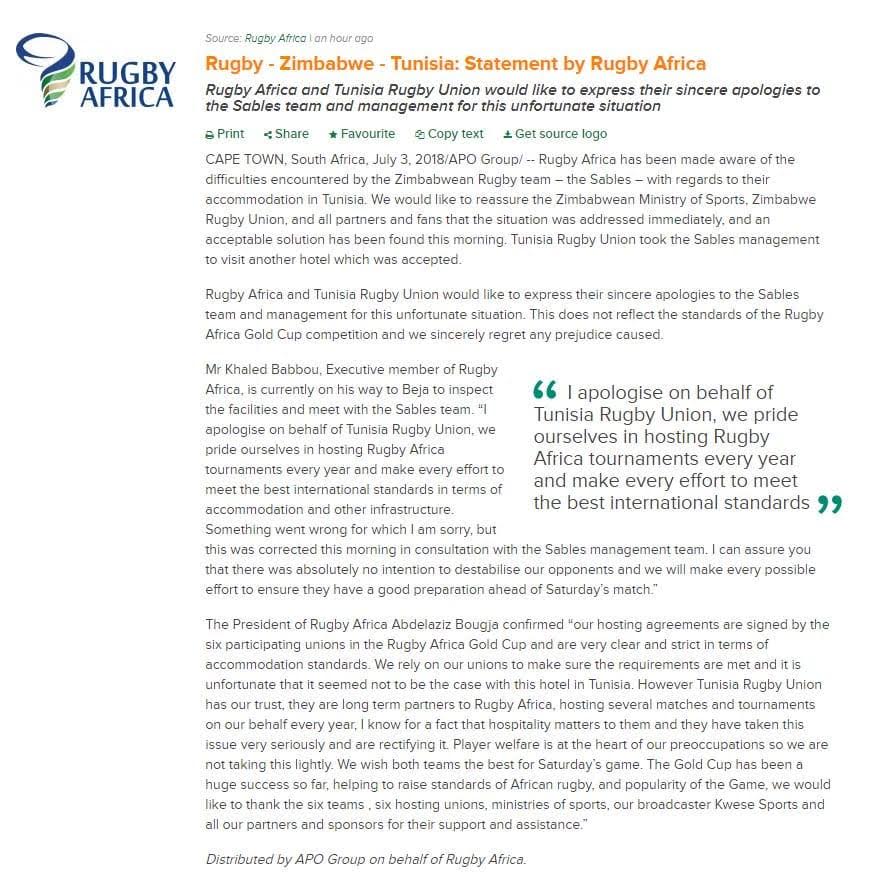