President Cyril Ramaphosa’s administration is planning to lay off 30 000 public servants in the next three years as part of the government’s cost-cutting measures.

The move is likely to put Ramaphosa on a collision course with labour federation Cosatu, which supported his bid to become the ANC president in December.

Government insiders who attended this week’s Cabinet lekgotla said the treasury has set aside R4-billion for this financial year to kickstart the process of issuing severance packages. A senior government official with knowledge of the planned restructuring said the layoffs would reduce the government’s salary bill by R20-billion.

Last year, the treasury announced it was considering the implementation of voluntary severance packages to reduce the public sector wage bill.

A senior government official this week said attempts to do this had failed, prompting the government to opt for “employer initiated” packages. Those most likely to be affected were the government’s older and more experienced employees.

“The [voluntary] employee initiative is not working because employees are not moving,” the senior official said.

“If we don’t deal with it now, even if we [re]configure departments, we will still have the same number of government employees. So you must get rid of them so that it’s not only about reducing the strain in the form of ministers but also in the form of the number of officials,” the official added. “But the downside is the targeted ones are the older, senior officials. It is done with the hope that once they exit you create a platform for youth to come in. But the youth come with no skills and capacity and therefore you compromise the capacity of the state.”

The proposed job cuts come at a time when the process to reconfigure the government is at an advanced stage and which is likely to be implemented after next year’s general elections.

According to government insiders, there are plans to cut the number of departments from the current 36 to between 18 and 24. 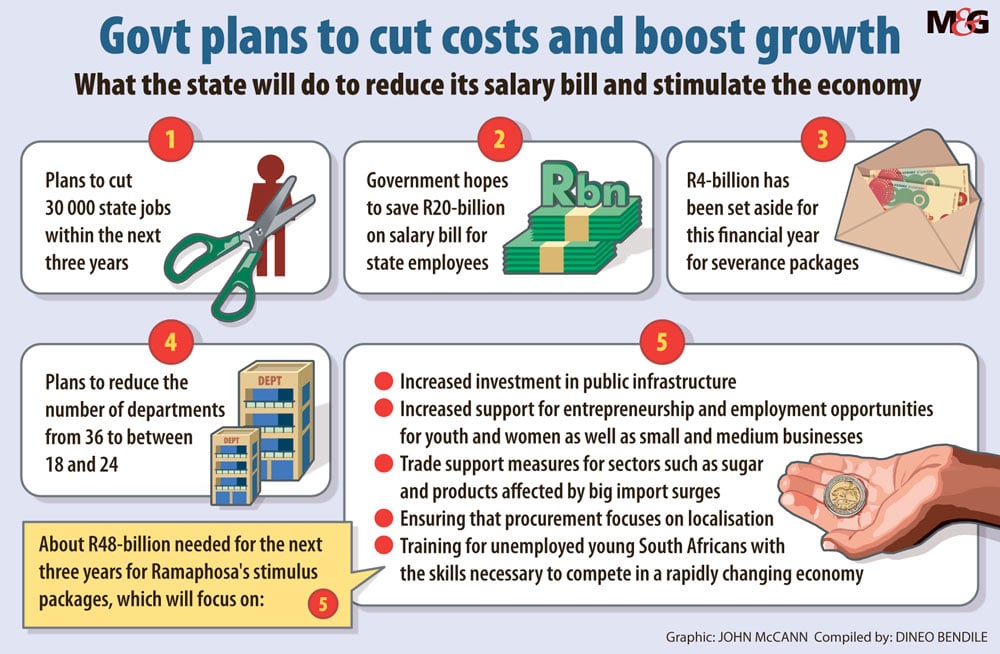 The lekgotla also discussed the possibility of cutting non-performing state-owned entities that have habitually relied on government bailouts and moving their functions to departments.

Discussions are also underway to form “mega-departments” that will absorb the roles of departments that are likely to be shed. One is the department of planning, monitoring and evaluation (DPME), which government officials said would possibly be moved from the presidency to the public service and administration department.

“As much as DPME might be in the presidency, they are not constitutionally mandated. Efforts are underway to see if those can be merged with others,” the senior official said.

Cosatu vowed to launch a campaign against the proposed job cuts.

“We are going to make sure our members don’t agree and advise them not to accept anything. They must only retire when they are ready,” said Cosatu’s public-sector wage mandating chief, Mike Shingange, who is also deputy president of the National Education, Health and Allied Workers’ Union.

“We are going to mobilise all public sector unions through the federation. And at the next central executive committee meeting the matter will have to be raised with a view of initiating a meeting with the government urgently.”

“During wage negotiations, the employer brought it in as part of the voluntary severance packages. At that stage we were of the view that it is inappropriate to include it,” he said.

Shingange said the decision did not make sense because “a few years ago the government was saying, when they go on retirement, members shouldn’t take the lump sum, as they become a burden on the state later.

“We don’t understand why the government would now want to lay them off and let them become a burden on the state,” Shingange said.— Additional reporting by Matuma Letsoalo