Smaller political parties in the Western Cape believe they hold the key to a possible coalition government in the province after next month’s general election.

No opposition party currently believes it can win an outright majority in the only province governed by the Democratic Alliance (DA).

But they say there’s a strong likelihood that the DA could be brought below 50%, leaving the door open for a hung provincial legislature and the opportunity for coalition horse-trading to begin.

Parties with reasonable support in parts of the province’s Boland (Cape Winelands) and Central Karoo regions say they’re capitalising on voter disgruntlement with major parties such as the ANC and the DA.

The Independent Civic Organisation of South Africa (Icosa), a party that splintered from the ANC, has several councillors represented in municipalities dotted around the Boland, Karoo and Overberg regions.

The party was formed after Kanna-land municipality mayor Jeffrey Donson and Beaufort West politician Truman Prince were expelled from the ANC.

Prince has since been welcomed back into the ANC fold and is now the Beaufort West deputy mayor.

Donson, who is Icosa’s leader and a municipal councillor in the Kannaland region, says the party has seen growth in all elections since its formation. “We started in 2006, and now we have 12 councillors in eight municipalities. We are busy with bread-and-butter issues in the communities. We don’t just work election time, we work every day,” he says.

Donson predicts a strong performance in the Central Karoo district, and in the Kannaland and Langeberg municipalities. “When you look at the bigger parties, they bring in people with buses and taxis from all over. And then it looks like they have a lot of support. We are closer to the people. We are going to do very well.”

Donson also dismisses questions that Icosa finds the majority of its support from the Western Cape’s rural coloured population.

In the Kannaland municipality, the DA and the ANC are in the unusual position of being coalition partners.

In the 2016 local government elections, Icosa won 48% of the vote and initially governed with the ANC.

The ANC’s national leadership then changed tack and sided with the DA to keep Icosa out of power.

In the largest Central Karoo town of Beaufort West, the municipality is governed by a coalition of the ANC and the Karoo Democratic Force (KDF), albeit with the KDF’s sole councillor swinging the balance of the party in favour of the coalition.

The KDF’s Noel Constable is the mayor of the town, and the ANC’s Prince is his deputy. 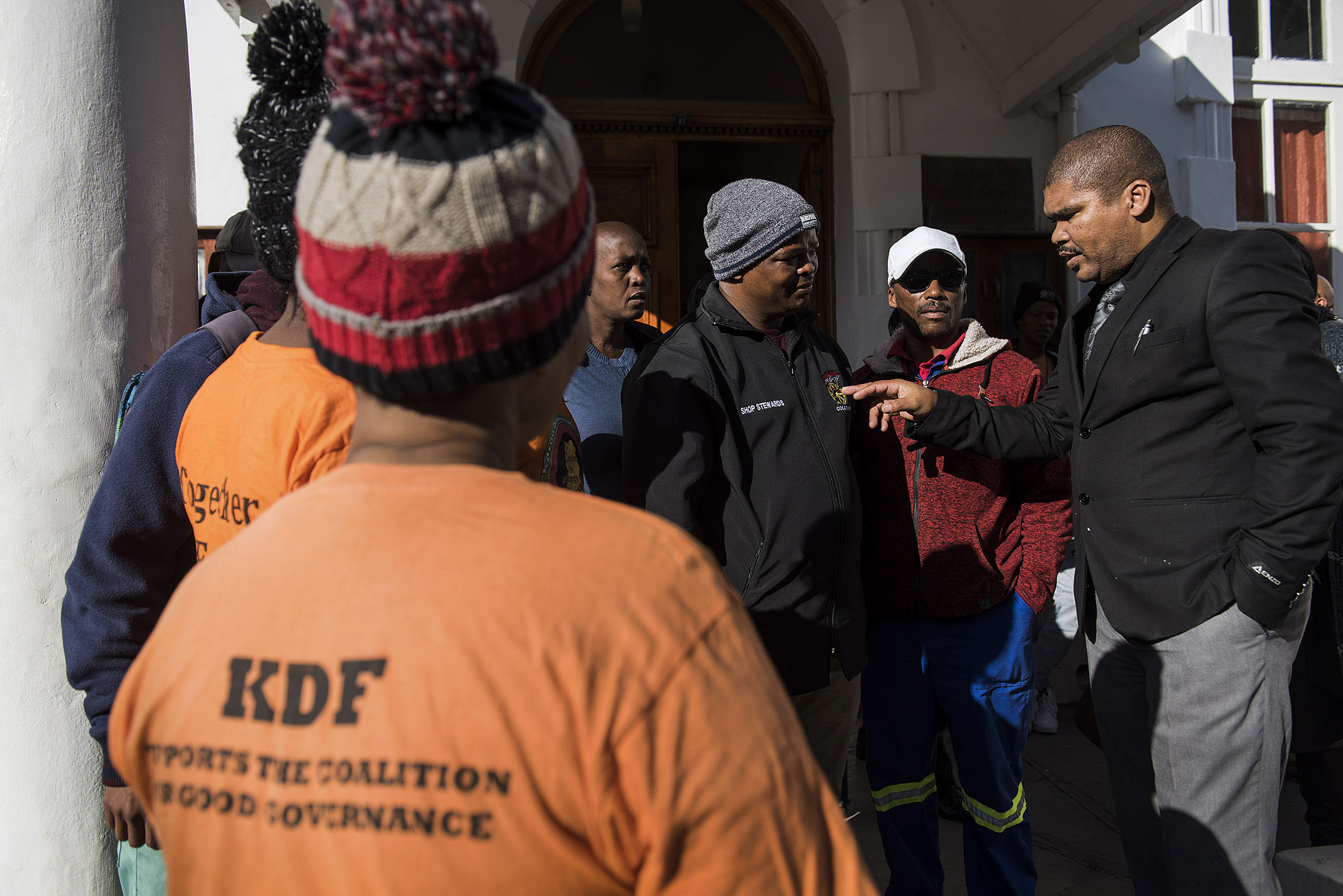 Realpolitik: Beaufort West mayor Noel Constable (far right) is from the KDF which runs the municipality with the ANC. Photo: David Harrison

One of the issues affecting voters in the region is the scarcity of jobs, particularly in rural, agricultural areas.

The Langeberg Unemployed Forum, a nonpolitical interest group for un-employed people in areas such as Robertson, Montague, Bonnievale and Ashton, says unemployment has been on the increase. The area relies on the agricultural sector but because of increased mechanisation and the adoption of the minimum wage for farm workers a number of farms have laid off workers or do not hire as many seasonal workers during planting and harvest season.

The forum’s Xolile Mpini says unemployment is the biggest election issue. “We feel that the interest of the unemployed is not catered for by our government.We don’t endorse any political parties. We read all their manifestos and they don’t speak directly to our interests. They are vague and general when it comes to creating employment,” Mpini said.

“Unemployment is the same throughout the country. What makes us worry is that, if you can legislate for a minimum wage, what about those people who are not even employed? Do you want to keep them out of the system forever?”

The forum says it is urging rural communities in the province to vote so they can hold elected leaders to account and demand jobs.

“We encourage our members, all the unemployed, to exercise their vote. To boycott won’t solve anything. We want to engage whoever is in government directly,” he said.

Truman wants his own show 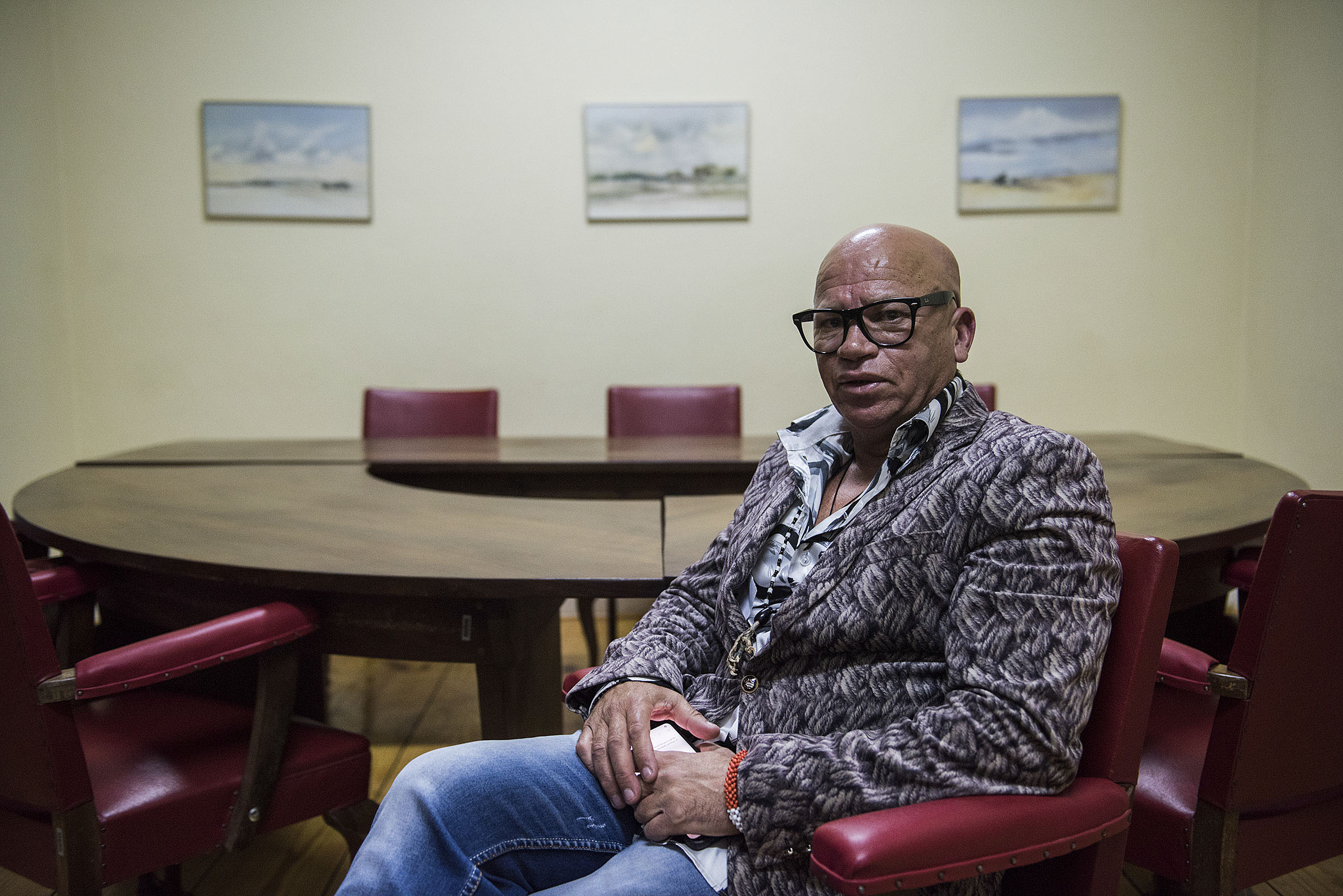 Controversial Beaufort West politician Truman Prince says he has a lot to offer the ANC at the provincial or national parliamentary level.

Prince is the deputy mayor of the Karoo town because of a coalition agreement between the ANC and the sole councillor of the Karoo Democratic Force (KDF), a small local party.

And although the KDF’s Noel Constable is the official mayor of Beaufort West, many see the town as being Truman’s show.

Over the past decade and a half, Prince — who has been the town’s municipal manager three times — has been mired in controversy.

In January, he suffered a heart attack and says that, after his short hospital stay, he’s a changed man.

“They used to call me the comeback kid,” he told the Mail & Guardian. “I’ve been tried and tested. I’ve been near death before. I’ve been shot and been in hospital five times. But I’m back. And maybe it’s time to rethink, and I think it’s time for a paradigm shift.”

Prince says it’s not time to slow down just yet. And he admits that, although he’s trying to keep his high levels of self-esteem at bay, he believes he can do well in the Western Cape provincial legislature or the National Assembly.

“I know I’m going to sound arrogant now, but when I listen to the people in the provincial and national Parliament I think I can add value. I think sometimes, when the EFF [Economic Freedom Fighters] were very rough in Parliament, I thought I would like to be there just to turn the focus on them, while they were focusing on former president Jacob Zuma. I would have loved to defend my organisation.”

But Prince may have to wait another five years — his name doesn’t feature on either the ANC’s national or provincial elections candidate lists. — Lester Kiewit