The old Durban International Airport, once the third-busiest in the country, was abandoned in 2010 for a new airport north of the city. An ambitious, R200-million plan to turn the old one into a hub for low-cost airlines would have returned it to its former glory. But a cocktail of corruption and court battles has seen the airport taken over by a mixture of tenants, each cutting into, or tearing down, parts of the terminal and its buildings. Huge potholes and new warehouses mean the cost of returning it to operation is only increasing.

The Mail & Guardian’s Sabelo Skiti went to find out why this once-thriving establishment now has grass cracking open its main runway.

Durban International Airport used to be the pride of that city. Opened in 1951, it ferried about 250-million passengers to and from the city in its nearly six decades of operation. In 2010, just in time for the football World Cup, it closed down so that passengers had to passthrough the new King Shaka International Airport to the north of the city.

Its terminal building, runways and open fields were bought by Transnet from the Airports Company South Africa for nearly R2-billion. A private company — Seaworld Aviation — then stepped in with an ambitious plan to bring the airport to life, envisaging smaller airlines using it as a hub to get tourists to Durban’s southern coastline.

A lease was signed with Transnet in June 2017 to operate the airport for 10 years — between September 2017 and 2027. But that plan has been put on ice, with Transnet and Seaworld stuck in litigation over the contract they signed.

The biggest argument is about the tenants who have now taken over the airport. These tenants have smashed down walls, cut through buildings and repurposed storage tanks meant for aviation fuel. Seaworld blames Transnet for failing to remove the tenants while the parastatal says Seaworld also broke sub-leasing rules.

The businesses range from a trucking company to an events and conferencing facility, a scrapyard and panel beater to a tile manufacturer.

The story behind how all this happened is contained in a series of forensic investigations that were commissioned, but not really acted on, by Transnet itself.

The Transnet employees implicated are either under investigation or they resigned when faced with investigations into alleged gratifications received for their roles.

The M&G visited the old airport on Tuesday. A similar visit was done by Transnet’s board late last year, at the invitation of Seaworld directors Xolani Mkhwanazi and Aaron Stanger.

That visit came after an increasingly desperate Mkhwanazi wrote a letter to Transnet board chairperson Popo Molefe, asking the parastatal to intervene and remove the tenants, whohe said were stopping the R200-million development.

During that visit, Molefe and his people would have been confronted by Airport Fast Foods — complete with Coca-Cola-sponsored signage above the entrance into the terminals.

Similar reminders of what this site was used for are everywhere. The café now serves general workers, forklift operators, mechanics and panel beaters, as well as Transnet’s Marine School. An entrance opens into the Enchanted Gardens Conference Centre — one of the companies now operating at the airport.

Next to the bar area, the rest of the terminal has been divided into rooms that serve as venues as well as storage for anything between cutlery and musical instruments. One of these is being decorated to a gaudy purple-and-white theme, presumably for an event.

These companies haven’t done much damage to the airport. But, further inside the building, a new hole, smashed through a wall, leads to a tile-cutting factory. 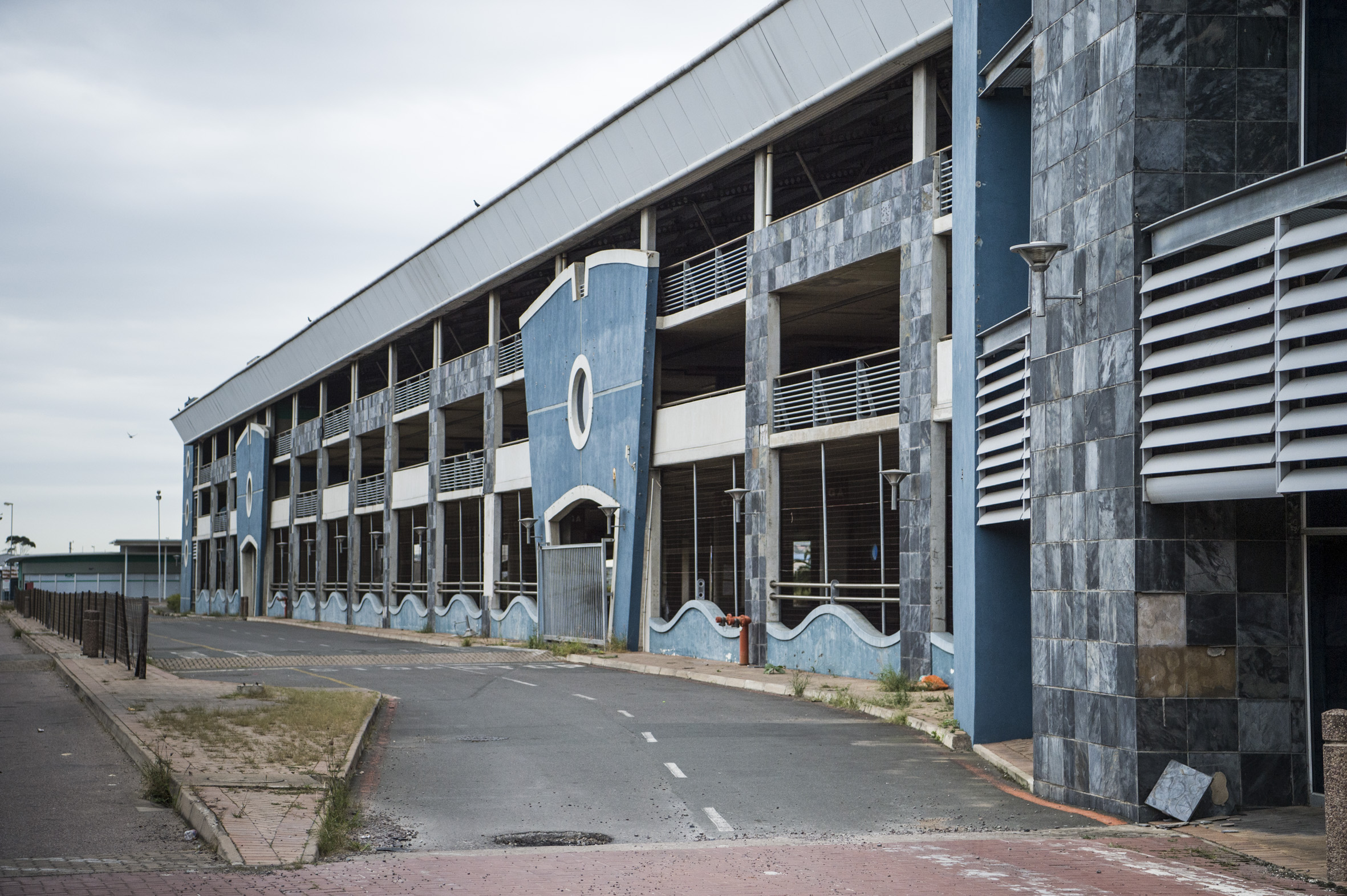 Damage: There are plans to renovate the dilapidated terminal buildings but the costs will run into hundred of millions of rands and the legal battle to evict tenants has become a seemingly impossible affair. (Delwyn Verasamy/ M&G)

Access to the apron from the terminals, where passengers would have walked through to the aircraft parked there, has been blocked off by a huge warehouse. This is home to Pulse Holdings, a company that operates warehousing facilities for various kinds of retail stock for supermarkets including Check and Save supermarkets in Durban.

The view from the airport’s tower — which should be used to guide flights to land and take off from the airport — is also obscured by the company’s warehouse that sits on 40000 square metres of apron. Pulse has also taken over the airport’s jet fuel tank to store its own liquids. 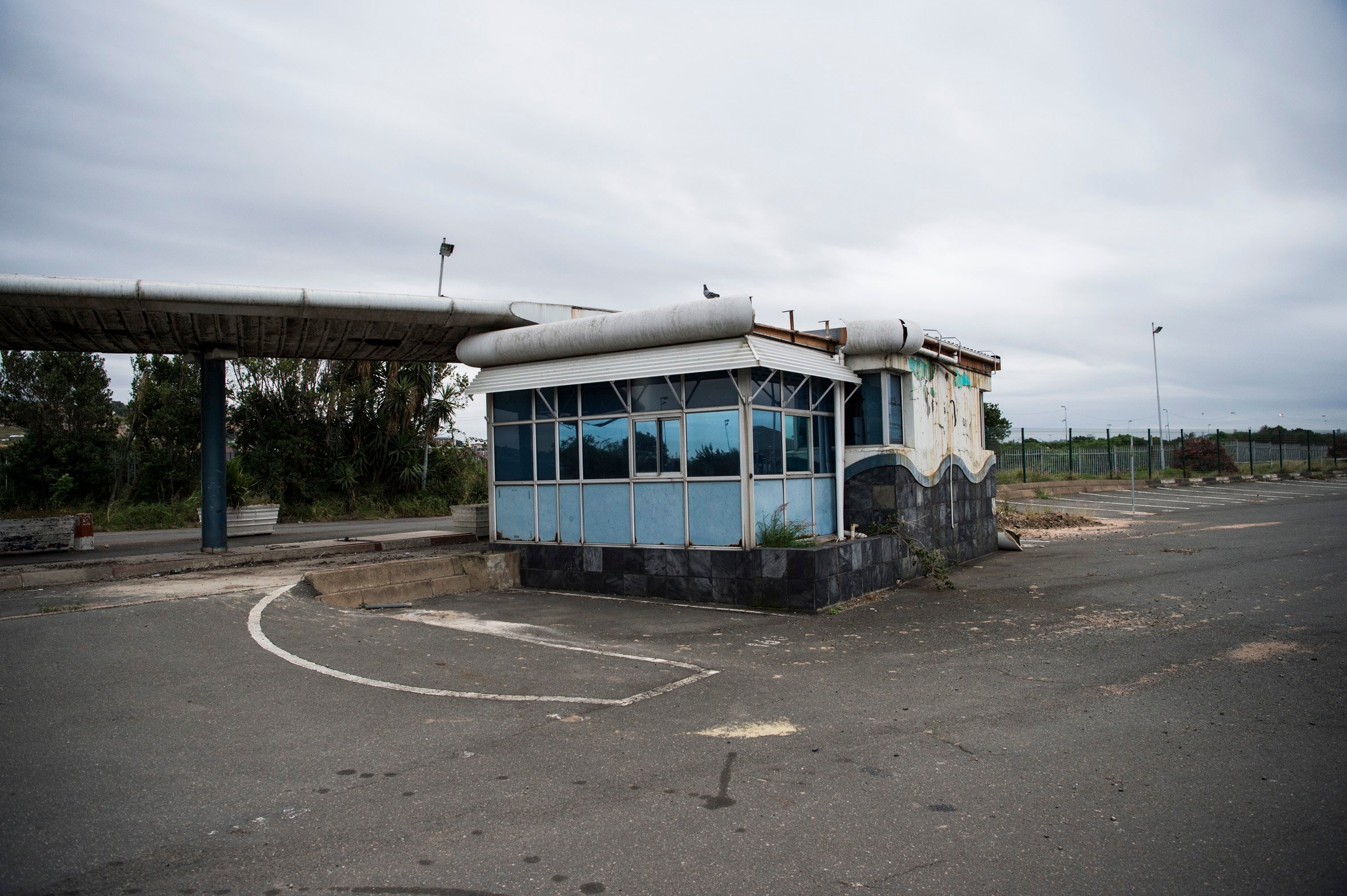 Crumbling beauty: Once a beacon of prosperity, the Durban International Airport has been allowed to deteriorate as it is parcelled out to tenants of every description. (Delwyn Verasamy/ M&G) 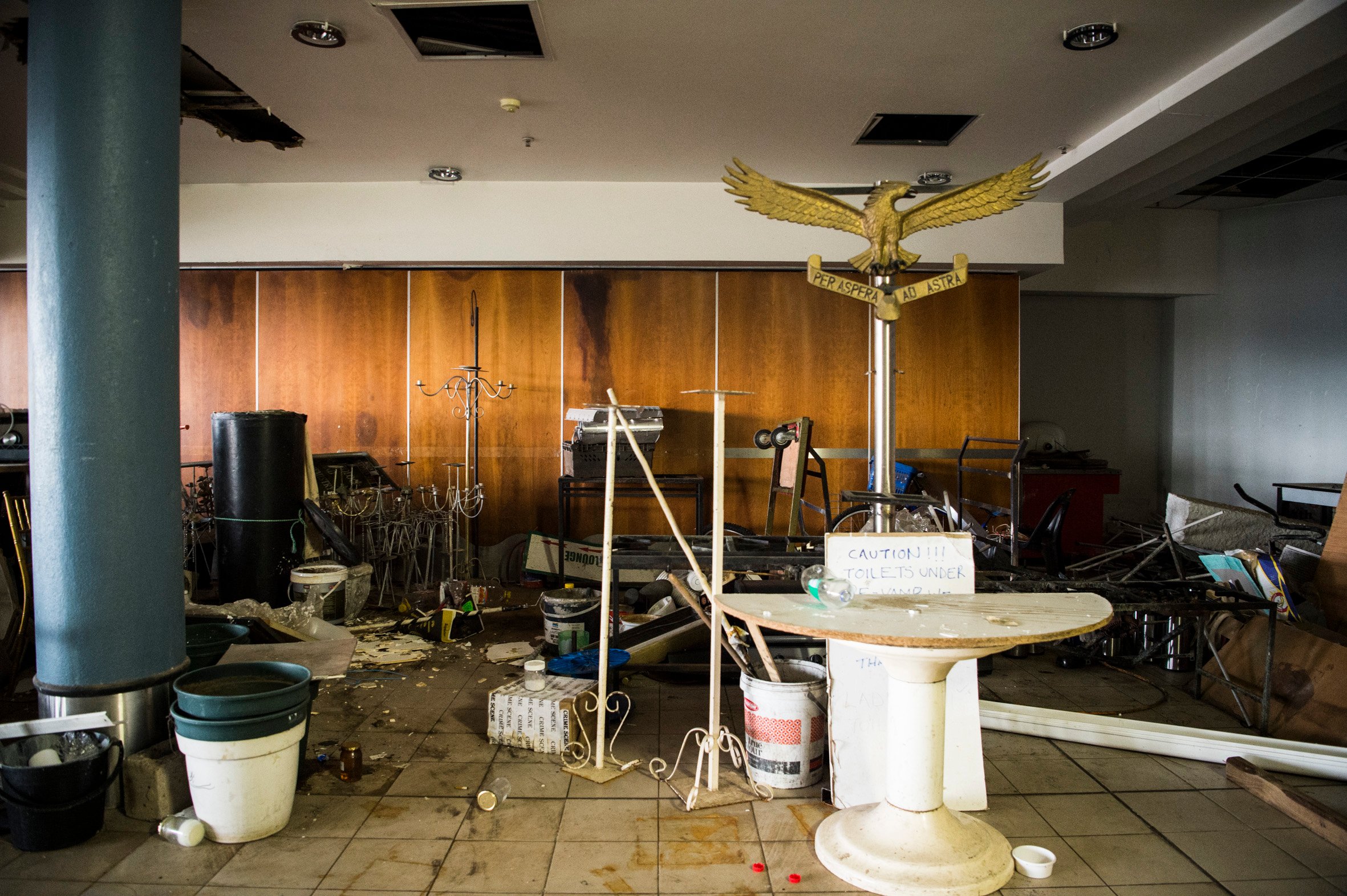 Out on the nearly 3km-long runway, huge Xs tell pilots in the air that the airport has been decommissioned. But, even if these weren’t there, the grass growing between the cracks in the tar, and massive craters in some sections, would be a warning enough that this is no longer a working airport.

Murray Smith, a local who cuts the overgrown grass for sale as bales of lucerne for farmers, has an informal agreement, he claims, that saves Transnet R2.4-million a year in landscaping costs. He has been there for the past six years and also operates a workshop on the property to fix and service his tractors. His intervention is not enough though, as thick bush has virtually overrun sections of the fence around the airport. 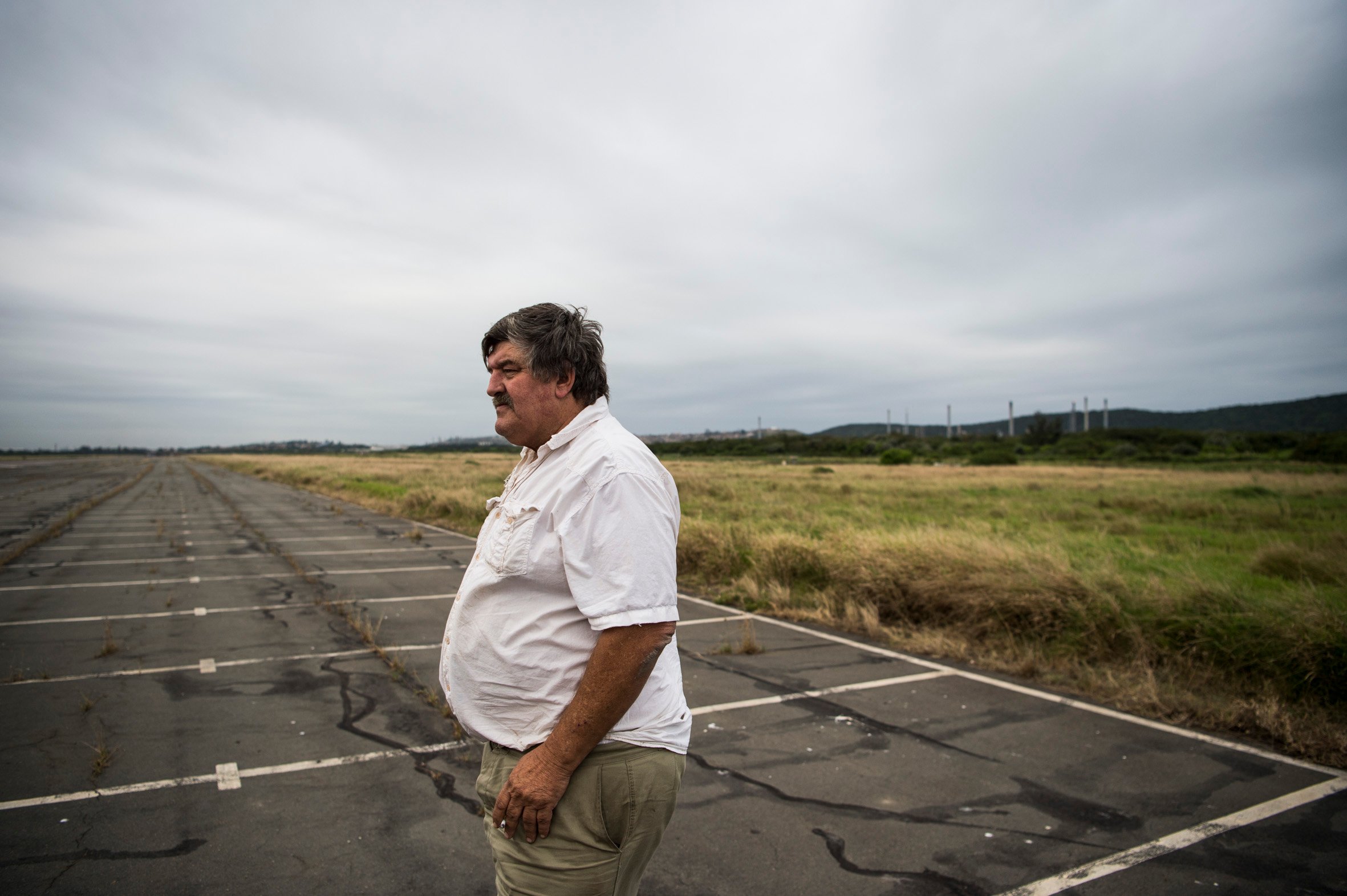 His last desperate act, after years of trying to formalise an agreement to maintain the grounds, he claims, was to petition Public Enterprises Minister Pravin Gordhan earlier this year to use the space to put upwind turbines for electricity.

He describes what is happening with the site, which borders the largest crude oil refinery in Southern Africa and a national key point, as a “shambles”. That’s despite its potential: “There are always strong winds here and, according to my calculations, they could power over 700000 homes [with wind turbines].”

Also inside the precinct, but outside the area allocated to Seaworld, lines of new cars either destined for export or incoming for the local market, are stored in plain sight by KDG Logistics. The company has also constructed its own warehouse, as well as a depot to fuel and repair its trucks.

KDG’s broken-down trucks, spare trailersand other equipment occupy another yard in the precinct. An attempt to speak to the company at the siteis met with open aggression by two employees, who refuse to provide contact numbers for company owners, saying these can be found on the internet.

A subsequent telephone chat to Abdool Kamar of KDG yields little information — he says he is only available to talk in the next week.

Sombagvelli Naidoo, director of both Airport Fast Foods and Enchanted Gardens, says: “Yes we do have leases and they are legitimate and legal.” She however declines a formal interview, saying she will also only be available in the next week.

It’s not just the airport that is affected by all these businesses. The back and forth movement of heavy trucks, carrying everything from fast-moving consumer goods to cars and even containers, has led to the total decimation of the access road off the N2. This is a huge problem for the air force base that shares the airport.

The military personnel and members of the police air wing, which use the base, have to compete with the constant convoys of trucks, while navigating ever-widening craters. There are also security issues for the base, with little security at the airport beyond the military police screen at the airport’s main gate.

The fight over who is responsible for all these tenants is contained in court papers. Seaworld’s 10-year lease deal with Transnet should be a money-spinner for the south of Durban because it brings much-needed employment to the area and provides a cheaper alternative to low-cost airlines, with some reportedly showing interest. The project has buy-in from the province, eThekwini municipality, and the air force.

Transnet, in court papers, argues that Seaworld was aware of the illegal tenants when they signed the lease (a claim that the company disputes) and had agreed to an 18-month rent-free period to allow Transnet to evict the illegal tenants and to do about R200-million worth of renovations to the site. That period ended in March, but the tenants are still going strong.

This week Transnet said it was involved insix different court matters to evict Pulse, MBC Parts, Enchanted Garden and KDG Logistics, as well as two other matters to evict and terminate the lease agreement with Seaworld.

The would-be developer’s contention is that individuals in Transnet’s legal department are delaying action to remove the tenants for two reasons: to punish Seaworld and derail the project and also to conceal their own complicity in the continued occupation.

Seaworld’s Stanger says the refurbishments cannot start while the tenants, and especially the warehouse that sits blocking the access from the runway to the airport terminals, are there.

He also estimates that the amount needed to refurbish the facility, including the Air Traffic Navigation Services (ATNS) which is run-down but occupied in three offices, had since escalated to more than R330-million. One hundred million of this would be invested in the runway alone, he says.

The ATNS, where flight control sits, is essentially the most important part of an airport because this is where aircraft traffic in and out of it is controlled.

As Transnet and Seaworld fight over who is responsible for all this damage, the dream of a revitalised airport in the heart of Durban continues to slip away in a mess of potholes and weeds.

Aaron Stanger serves on the board of the Adamela Trust, the Mail & Guardian’s non-profit partner