We’re all dead. Indifferent to the tribulations of the world because it only gets worse, especially if you are a black womxn. This is the sense I got when I went to Zimbabwean artist Portia Zvavahera’s exhibition Talitha Cumi.

The artist who now lives and works in Harare, Zimbabwe, works with a mix of oils and silkscreen on large canvases.

Although she was meant to speak to me from her studio in Harare, she explains that she could not be reached because she arrived home to no internet and electricity. When we finally get to speak, the Whatsapp phone call that connects us takes place shortly after she has returned from christening Stevenson Johannesburg’s new gallery space in Parktown North. “I’m sorry about this,” she exhales while shuffling through what sounds like a busy morning in Harare before our line is cut for good.

All in all Zvavahera has had 18 exhibitions, 11 of them group shows and seven solo exhibitions, five of which were at the Stevenson galleries in Cape Town and Johannesburg. She has been with the gallery since 2013, after her first exhibition at the Venice Biennale.

Zvavahera’s work is the layered, otherworldly and hauntingly supernatural offspring of her dreams. The figures in the foreground seep into fluid backgrounds of floral imprints and lines have few demarcations, creating a fluid, dream-like haziness.

“I’m inspired by my life experience, and that’s where my subject matter comes from — my experiences and also from my dreams. I sleep with my sketchbook under my pillow so that whenever I have a dream I can sketch it down in the book,” Zvavahera told Between 10 and 5 in 2015.

The dream element is also seen in Zvavahera’s brush strokes, which seem to be made in haste to capture the unrefined sentiments that come as soon as she wakes from the dreams.

The artworks seem to probe religious themes such as condemnation, confession, salvation, cleansing, rebirth and redemption. They also seem to exist as a tangible manifestation of Zvavahera’s prayers.

I’m With You, Zvavahera’s 2017 exhibition with Stevenson, was accompanied by an essay written by artist and curator Nomaduma Rosa Masilela. In it, Masilela cites the connection between Zvavahera’s dreams and her faith.

“For me, the dreams are like the future — telling, letting me know what to do next or what’s happening in the spirit world that I should be aware of. And then I should take action in prayer,” Zvavahera explained.

The protagonists in her iconography hopscotch between binaries such as light and darkness, hope and gloom, flamboyance and restraint, much like the layered negotiations the artist has to navigate while balancing her faith with Zimbabwe’s state of affairs.

In a 2016 Mail & Guardian article titled Zim artists see with spiritual eyes, artist Nontsikelelo Mutiti describes Zvavahera’s work as a response to Zimbabwe’s decline. She said: “At the moment there are a lot of social crises people face because of what has happened economically. So a lot of people are turning to spirituality, almost like hyperspirituality.”

During the same interview, another one of Zvavahera’s contemporaries, Robert Machiri, said Zimbabwe continued to walk within the boundaries of Christianity established during colonial times. “We were colonised by the Bible and that is something that has become our national identity. There’s been a shift from Catholicism and the Methodist and Anglican churches to the Apostolic faiths. At all times people are negotiating their belief system to different extents.”

Zimbabwean artist Kudzanai Chiurai critiqued this view in his series Genesis (2016) and We Live in Silence (2017).

READ MORE: Evolving, cynical and everything in between

Zvavahera’s work exists to reflect the country’s relationship with Christianity.

The title of her exhibition is taken from a biblical allegory from the book of Mark when Jesus resurrects a child from the dead. The Aramaic phrase “Talitha Cumi” means “little girl, arise”. Under this title, Zvavahera’s large-scale paintings depict a longing for spiritual transcendence, a need to break free from the affliction one is dealt when having a renewed hope or faith in humanity. This is done by portraying the protagonist’s desire and struggle for a rebirth, an ascension or reawakening.

Her paintings come together to give the audience eight scenes from Zvavahera’s dream of ascending. 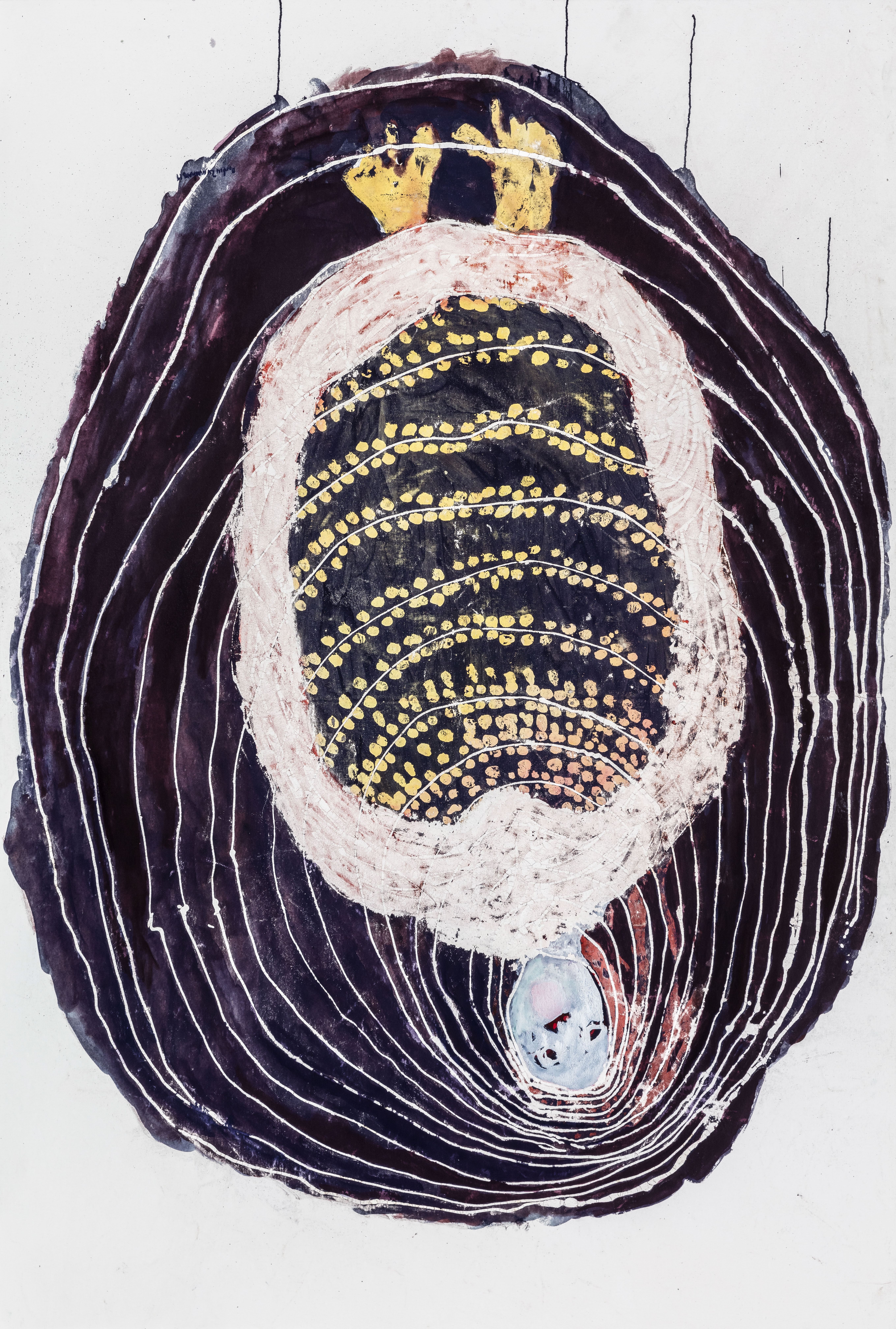 In the first scene, Seated in Agony, the protagonist embodies what the Bible refers to as a broken spirit and contrite heart. A cross-legged figure sits in a cave-like space with a downtrodden ghostly face. Her frame is surrounded by coils that seem to weigh her down. The protagonist then progresses to a second chance in Kubuda Mudumbu Rinerima (Rebirth from the Dark Womb). She sits in the anterior foetal position to indicate the proximity of the rebirth. This process of dying or forgetting the old and starting anew continues in Cleansing, Arising from the Unknown and Arise Spirit Within. By the time we reach Gliding on My Knees to Heaven, the coils that at first overwhelmed the protagonist in Seated in Agony have been transformed into angelic wings. 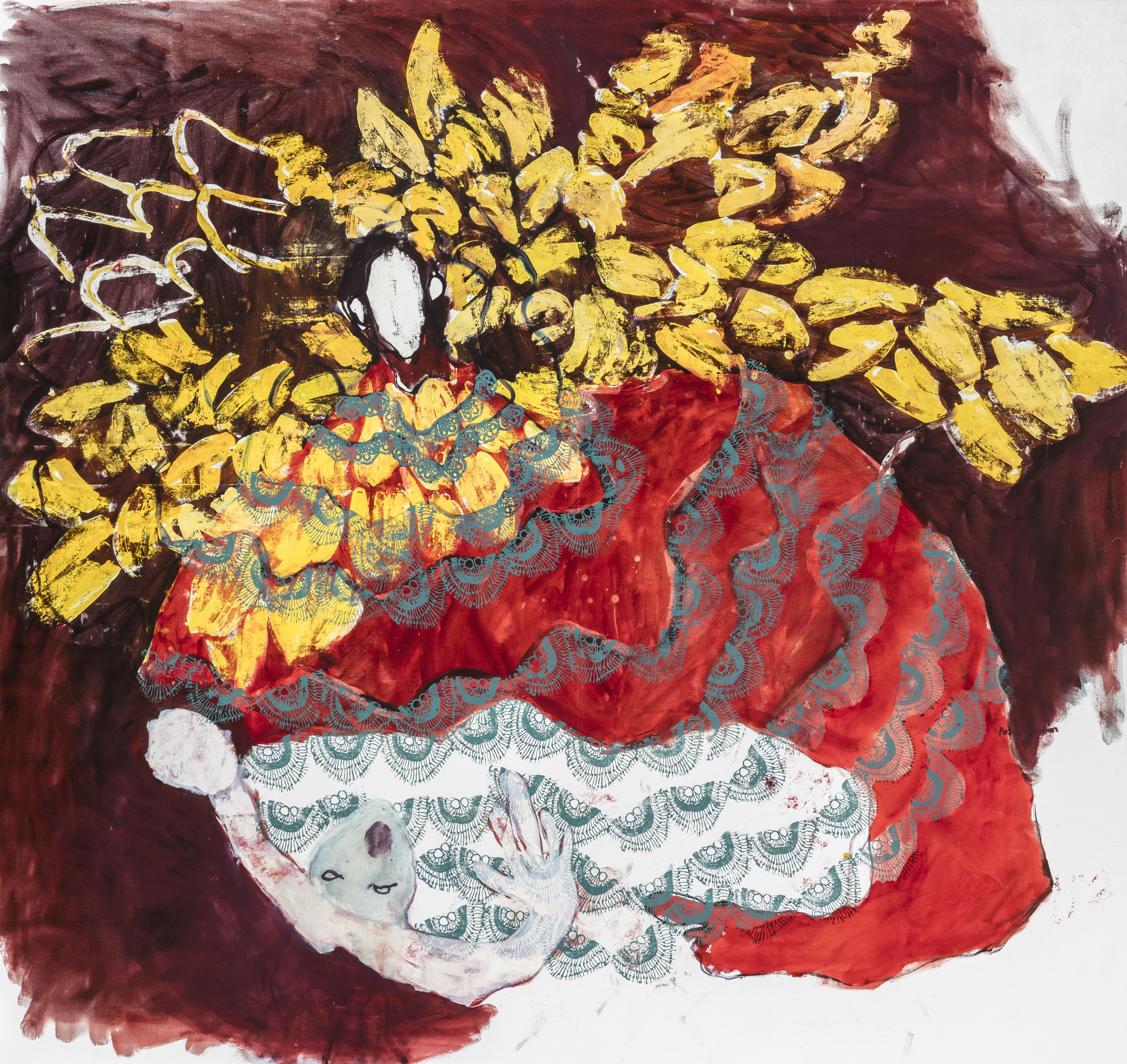 Like most of Zvavahera’s previous works, the figures in Talitha Cumi are women — women giving birthing (creating), nurturing (cultivating), and kneeling in prayer. Writing for Artthrob about Zvavahera’s 2014 exhibition Wayfinding, Percy Mabandu articulates the issue of depicting women in problematic Christian normatives: “The artist confronts her audiences with figures of women bent by mysterious tragedies of existence, kneeling or prostrated in observance of their submission … These are defeated subjects. The only act of personal agency open to them is to will themselves into surrender to a higher force in their lives.”

What is comforting about Zvavahera’s work is the artist’s ownership and reimagination of divinity. In a world where religious tropes are often self-righteous, blemish-free white folk sporting golden halos, her figures are allusive, mystical, unlimited and lend themselves to a spirituality that goes beyond the narrowness of Western interpretations of the divine. And although her work lends itself to Christian referencing, Zvavahera’s message does not alienate nonbelievers because the need to transcend suffering is a global desire across belief systems.