Through an analysis of at least 80 contracts that were either recommended or approved to bypass the regular tender process, the Mail & Guardian found that three of Johannesburg’s biggest fleet tenders — amounting to billions of rands — bypassed the process.

There are two types of regulations that allow state organs to bypass the tender process: regulation 32 and regulation 36. The city used these regulations to award the three fleet contracts, which include:

The chief director for governance, monitoring and compliance in the chief procurement office in treasury, Solly Tshitangano, warned last year that state entities, including municipalities, were abusing these regulations and that this was opening the public fiscus to looting through inflated contracts.

Ryan Brunette, a research associate at the Public Affairs Research Institute who has done extensive work on public procurement, explains that deviations ought to be used for something that is unpredictable and fits the definition of an emergency.

“What the deviation allows is for politicians or whoever is involved in the procurement process to pick whatever supplier they want, which is often their friends or political connections,” he said. “These relationships are not conducive to the discipline you need to drive efficiency.”

But, he added, deviations can increase efficiency, because regular procurement processes can often be too stringent and produce operational confusion.

City Spokesperson, Nthatisi Modingoane said that since the entry of the new administration, the City has worked steadily to improve our supply chain process which has historically fallen short of the required standard.

“The City is in the process of putting in place mechanisms which aim to improve planning within supply chain so as to ensure the proper implementation of processes which will allow for the efficient procurement of services, which will allow the City to deliver progressively better services to residents,’’ he said.

The most expensive contract signed off over the past five years was worth R1.3-billion. Here, Mogale City was approached by the City of Johannesburg, which requested the appointment of a service provider for non-specialised vehicles for a period of 36 months. The contract was approved in September last year and signed off under regulation 32. 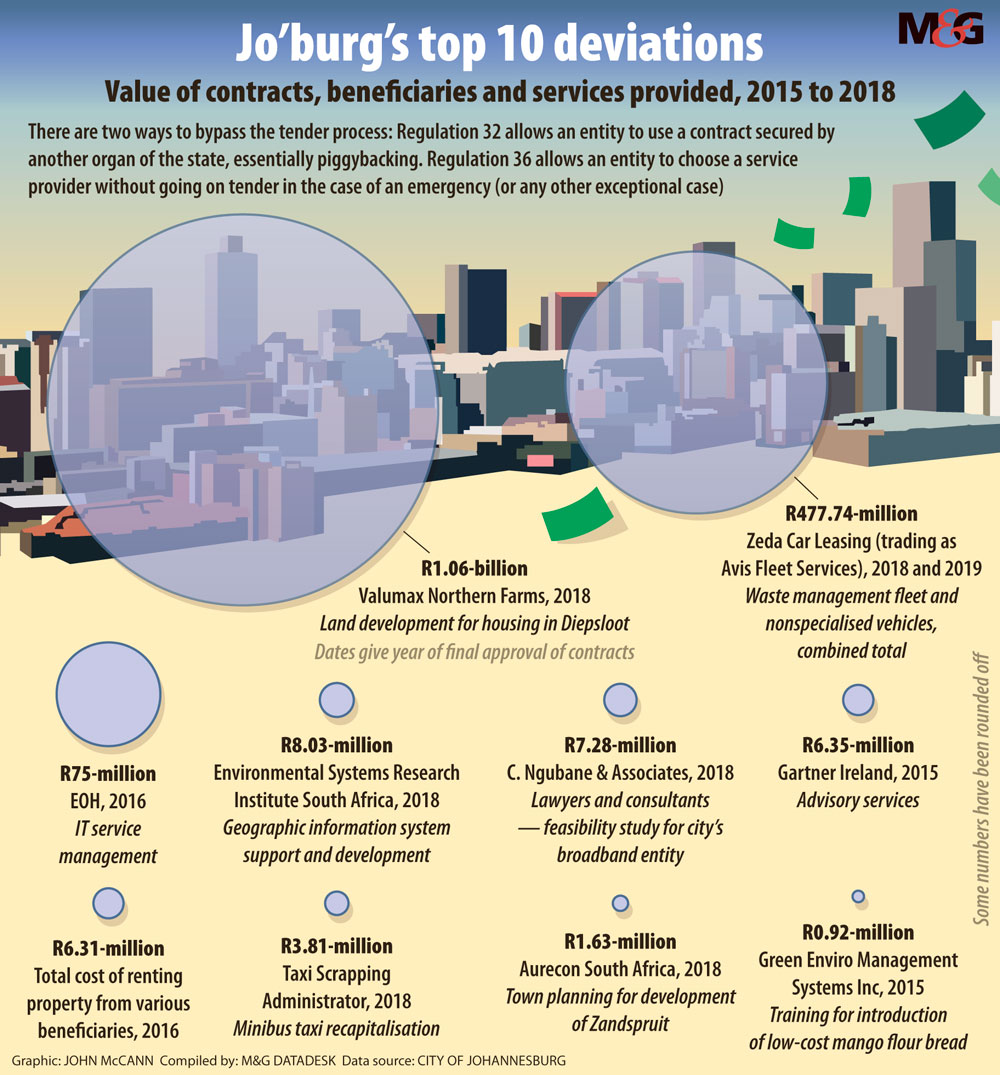 This regulation allows accounting officers to procure goods and services for the municipality under a contract secured by another organ of the state.

Last year investigative journalism unit amaBhungane reported that Afrirent was awarded the contract and that just before this was done the company made a R500 000 payment to Mahuna Investments, which is owned by Matsobane Phaleng, the cousin of Economic Freedom Fighters president Julius Malema. The payment was said to be for services rendered by Afrirent to Mahuna.

AmaBhungane reported that political pressure was exerted on the City of Johannesburg to award the contract to Afrirent. At the time, the Democratic Alliance was running the city with the help of EFF votes.

Modingoane said the city would save R120-million by contracting Afrirent, and that the company had gone through a competitive bidding process at Mogale City. Regulation 32 was used to facilitate the tender.

Another large contract — to the tune of R1-billion — was awarded in September last year to Valumax Northern Farms under regulation 36. Valumax was appointed as the turnkey developer for the remainder of a housing project in Diepsloot.

The company’s Helgardt Slabbert said: “All due processes were followed to secure the mentioned project … Subsequent to the initial appointment in 2013, the current administration of the City of Jo’burg took a decision to re-approve and extend our contract. Our company has always diligently executed the obligations in terms of our development agreements with COJ [City of Johannesburg].”

Modingoane said it was impractical for the city to put out a tender because the building specifications had changed to walk-up structures that would accommodate more units and improve housing delivery.

“It is important to note the following: procurement of services under regulation 36 of the MSCM [Municipal Supply Chain Management] allows the city to deviate from normal procurement process under the following conditions … in an emergency; if such goods or services are produced or available from a single provider only; or for the acquisition of animals for zoos; or in any other exceptional case where it is impractical to follow the official procurement process. It is an oversimplification to state that its [regulation 36] application is only limited to the occurrence of an emergency as implied,” said Mfeka.

The latest deviation — apparently under emergency conditions and recommended last month — was for the purchase of 92 specialised fire and rescue vehicles from a company called TFM. It is owned by controversial businessman Mcebisi Mlonzi, who is currently fighting with Eastern Cape municipalities after numerous investigations by the Special Investigative Unit (SIU).

Mlonzi told the M&G: “I don’t only get my contracts through deviations and I do a lot of business with the government. I have taken the likes of Amahlathi municipality [in the Eastern Cape] to court because they have listened to the bad advice of the SIU and have reneged on their contractual agreements with me.”

According to a document signed by the City of Johannesburg, the contract Mlonzi finally landed was put out on tender. But then the preferred bidder withdrew its bid. The city waited another two months to approach companies who could provide the vehicles.

“Currently the City has 7 active fire engines. Taking into account that during winter the fire incidents increase substantially and there is a greater demand fire these vehicles, it was imperative that the City ensures there are sufficient fire engines to respond to such calls,” Modingoane said. 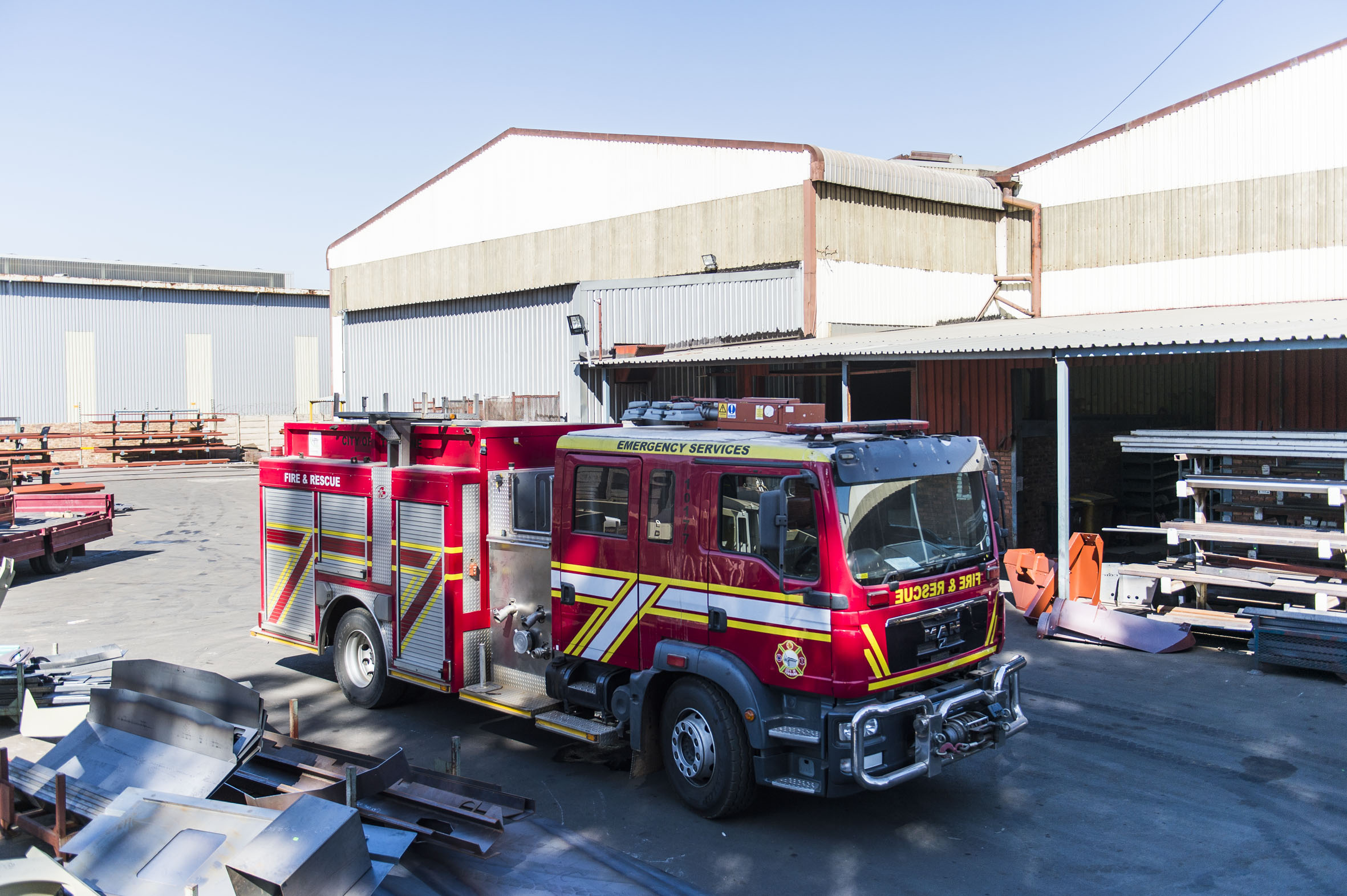 Red light: TFM was awarded a fleet contract for the city’s fire department through a deviation. (Delwyn Verasamy/M&G)

William Gumede, an associate professor at the University of the Witwatersrand’s School of Governance, said the auditor general and treasury are concerned about the number of deviations that state entities are signing off. “Yes, you can have a deviation for one, two things but once it escalates to more than that and the amounts are quite high, you have to ask what is going on.”

According to the data analysed by the M&G, Zeda Car Leasing — a division of Avis Fleet Services — has been awarded the most number of contracts without following procurement processes.

Loyiso Langeni, the head of media management at Barloworld — which owns Zeda — which was awarded the five-year waste management contract after a tender process in 2012, said: “In the interests of service delivery to the citizens of Johannesburg and ratepayers, Avis Fleet continued to provide services, when the initial A400A contract was extended, pending a transition to the new service provider Afrirent, in compliance with regulation 36.”

In August last year, the city signed a R31-million deviation for Zeda’s vehicles. Two months later another deviation was requested for the same company, for the same services — to the tune of R74-million. In March this year, Zeda was the beneficiary of the department’s deviated contract worth R372-million to provide Pikitup with “management services, ad-hoc rentals and maintenance of waste management vehicles” for the next 12 months on a month-to-month basis.

The data the M&G has gone through shows that even the smallest tenders have been bypassed by the city. One tender was for winter personal protective equipment, which could include hats, vests, gloves and boots.

The city also bypassed the process to appoint a service provider to assist in handling evictions, land invasions and relocations.

Gumede added that the concern about deviations is that it is easier to hide incompetence and corruption. “For the purchase of vehicles, planning is necessary. Government entities and municipalities get away with explaining away what the emergency was. This is taxpayers’ monies and we need a better explanation of what these emergencies are.”

The Mail & Guardian Data Desk is doing an investigation into the procurement policies of the City of Johannesburg. If you have further information related to this story, please contact the author at [email protected] All correspondence treated in complete confidence.

How COJ got the fleet by Mail and Guardian on Scribd