A school secured what leaders couldn’t: A negotiated truce

On September 18, Cyril Ramaphosa’s speech in Parliament about the recent xenophobic attacks in Johannesburg mentioned one act of hope: how a primary school in Jeppestown negotiated its reopening with the hostels’ izinduna after weeks of violence.

READ MORE: Behind the Johannesburg riots: How did they happen?

I founded Jeppe Park Primary School in 2016, in the hope of a better education for children in the suburb. I saw its windows smashed and the children terrorised by the violence. 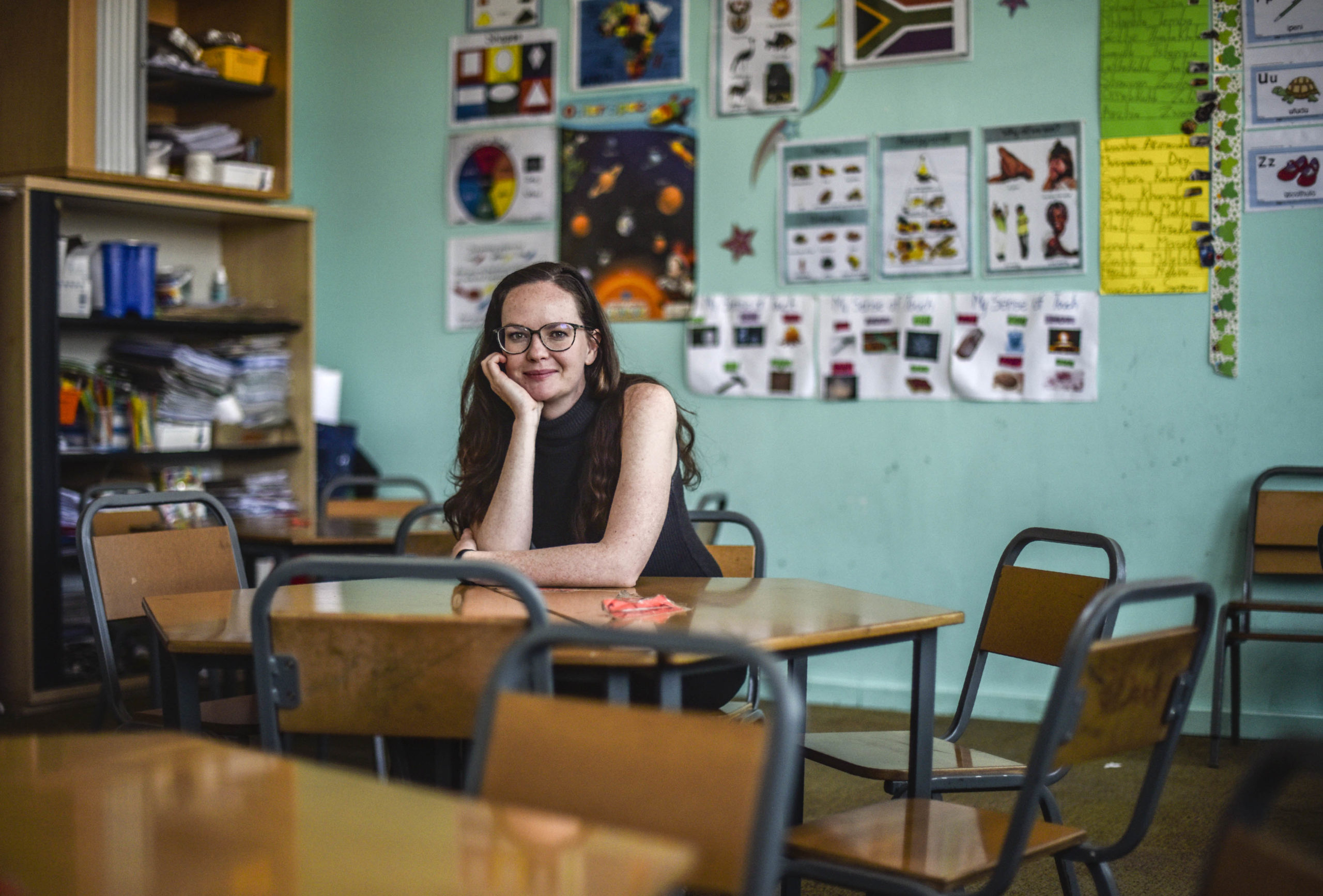 This is our story of loss, survival and the bitter relationship between violence and forgiveness that keeps our country hanging together by bare and miraculous threads.

It all began at dusk on Sunday evening, September  1. Our school WhatsApp group started lighting up with messages of a building in our neighbourhood being burned down. The family of a child at our school had to scramble out with whatever they could take before their home went up in flames. Immediate problems — not enough nappies and impractical shoes salvaged — were replaced by a bigger problem: Were all the children’s birth certificates rescued?

In some ways, this was an ordinary tragedy. Haphazard homes have a tendency to burn down in places like Jeppestown. Families reapplied for identity documents, lived off canned food and bought new shoes. But this tragedy was also different. For 12 days, the effects of the unabated violence blinked across our cellphone screens several times a day.

“Just got a message from [redacted]’s mom. She says everything they had was burned. Uniform, bedding … All that is left is walls and ashes.”

“We fear we are running low on food.”

One, hopeful message from the fathers’ forum read: “Dear committee members, if any member parents are in need pls do not hesitate to contact fellow members if we can offer help in any way …”

On Tuesday evening, we received this message: “Conversations with my friends in Jeppe have informed me that people in Jeppe allegedly believe that the school is owned by [redacted] who is not South African. I heard that [redacted] had to explain (in the midst of the crimes) that the school has no ownership and that’s when it didn’t become a target of the violence.”

Later, when we started piecing the stories together — rumours that the school was owned by a foreign principal, by Nigerians, by Maboneng (the hated gentrified neighbourhood up the street) — we realised just how close the school had come having more than its windows broken. Schools up the road were not so lucky and were burned to the ground. 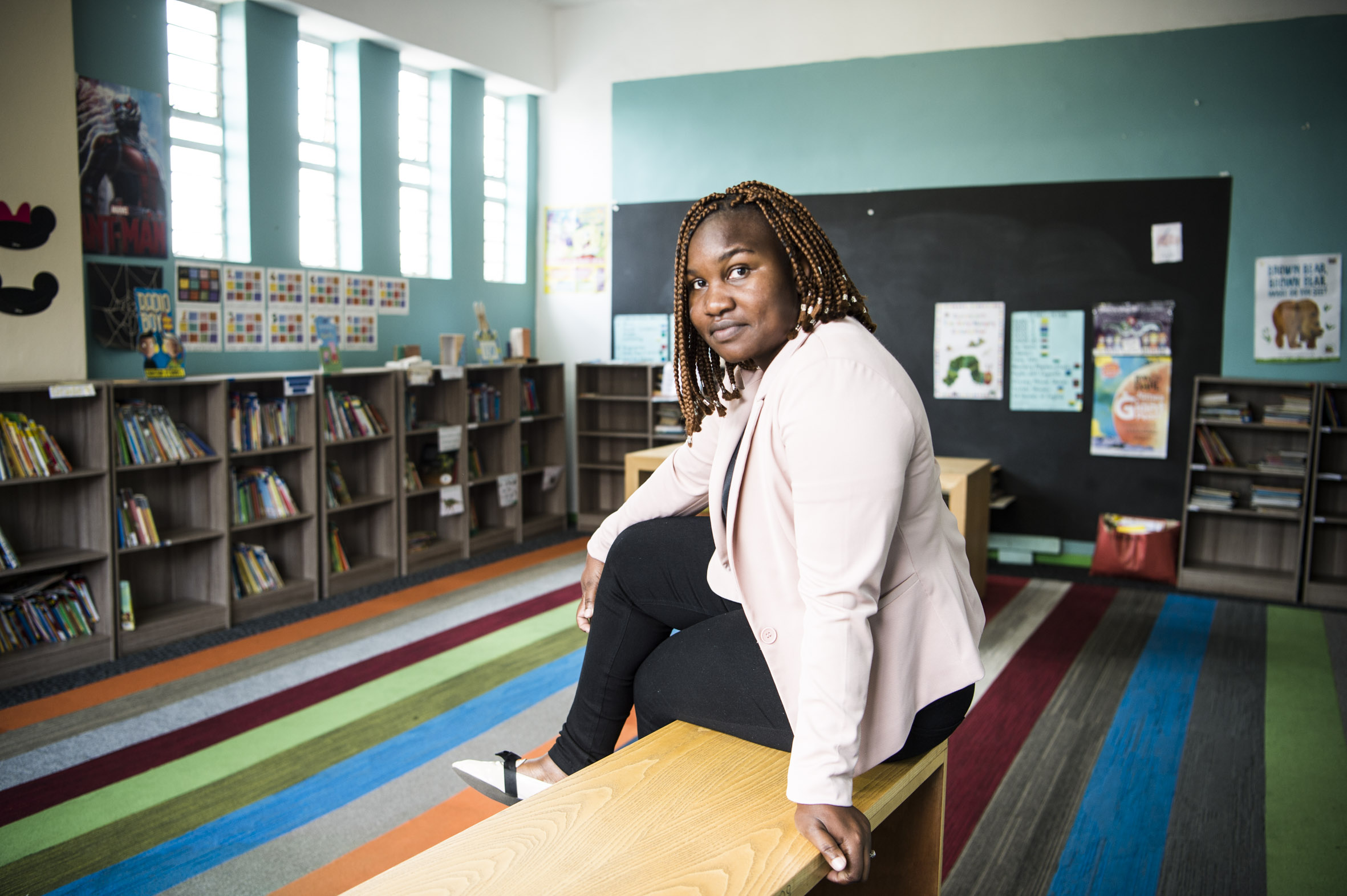 Only later did we see the flyer stamped with the fateful date of September 2 2019, which was distributed ahead of the violence. It read:

“Sisonke’s People’s Forum Hlanganani Makhosi Ohlanga of South Africa invite all the residents of this country, students, workers, taxi industries, music artists, government workers, law enforcement, to come together as South Africans with one voice of ENOUGH IS ENOUGH, ON SELLING OF DRUGS, ON PROPERTY THEFT, AND ON OUR WORK TAKEN BY FOREIGN NATIONALS.

“We as the people who fought for this freedom, find no respect from the owners of the companies and what is going to happen on 02  September 2019 is to show our dissatisfaction, and to use our right to vote by taking out foreign nationals from our work.

“SOUTH AFRICA FOR SOUTH AFRICANS. THIS IS NOT XENOPHOBIA BUT THE CONCRETE TRUTH!” 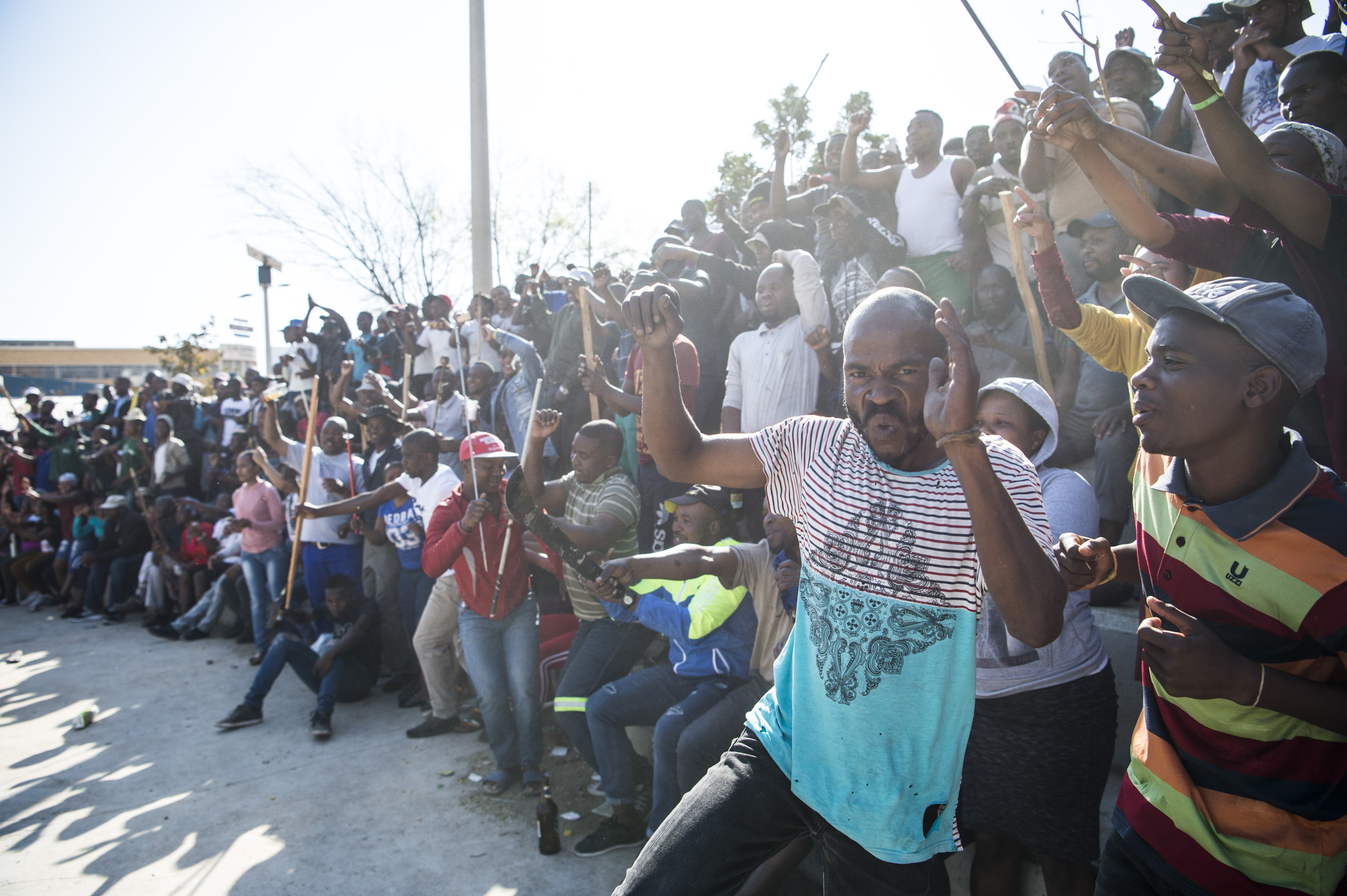 Storm: Residents of hostels were among those who looted shops and burned buildings and vehicles after a call went out that South Africa was for South Africans only. (Delwyn Verasamy/ M&G)

Everything about these riots seemed simultaneously tenuously and intimately connected: a building burns down on Sunday night, causing looting; an organised strike planned for the next day coincides with Ramaphosa’s World Economic Forum meeting; Johannesburg mayor Herman Mashaba’s raids two weeks prior and a few streets up on shops selling counterfeit goods, the images of the raid mirroring the images of the looting; rumours of orders coming from “on high” in KwaZulu-Natal, and of police hostels in City Deep joining the general riots; the breath-taking macroeconomics of 55% of youth being unemployed.

So many factors matched up with one fact: how quickly frustration and desperation can make a city go up in flames.

READ MORE: The people behind the xenophobia

As this was happening, leaders in this country could not have spoken more clearly: the mayor, normally so full of bravado; absent. The president; absent. Police Minister Bheki Cele, after one half-hearted address to stop the violence (in the footage you can see the school building in the background) cancelled his main address and never pitched up again. Former Inkatha Freedom Party leader Mangosuthu Buthelezi was jeered off the stage. Nobody in power seemed to have a grip on things.

What could a lone primary school do when faced with an uncertain future amid some of the worst violence the city had seen?

It had been 10 days without the rioting letting up. It became clear that we would need the blessing of the hostels’ izinduna — the only present and real power in Jeppestown — to reopen the school. Despite what seemed like unmitigated chaos on the streets, if you had the protection of izinduna you would come to no harm.

Violence has hierarchy in Jeppestown.

I had met one induna before — he had helped us with men who were drinking in front of the school. He struck me as a person of wisdom and insight.

Yet it was hard to predict the terms of this meeting. Some sources had told us we would have to account for every “foreign” teacher and child before being allowed to reopen the school.

People who lived in the hostels and have links with the school approached izinduna before we could. They could come on Thursday at lunchtime to the school, we were told. We made pap and stew. None of us slept very well on Wednesday night.

Long conversations were had about joblessness, criminality, acceptable and unacceptable levels of foreignness, various political players, the state of the country and manhood.

They were worried about the school being closed and were adamant that the children shouldn’t stay at home any longer than they already had. They said it was urgent and important to open the school because it was a beacon of hope for the children of the area. They wanted children to be protected from the social ills around them and spend their days building their future. The parents, izinduna and teachers all agreed: the children should go back to school. We made some concessions. They blessed us.

Is it a success of our democratic dream that an Afrikaner woman, two primary school teachers (one a 25-year-old Zulu woman, the other a Tsonga man) and a Chinese American sat with the residents of Jeppestown to do what the leaders of this country could not: to break bread with izinduna and talk to each other as people about what happened and how to move forward? Or is it a failure?

Perhaps it is both.

On Monday, September 16, we reopened the school. About 10% of the schoolchildren had vanished to rural areas and are living with relatives — unreachable. We also saw one of the mothers in the background of a television interview at the embassy of a man repatriating to Nigeria.

The school held an assembly where parents who had participated in the riots sat next to parents who had lost everything, who asked our school principal: “How can you make sure that our children will be safe after what they have watched their parents do to us?”

On Wednesday, the president spoke about the school in Parliament.

On Thursday, instead of our usual, colourful children’s street parade on Heritage Day, we held a quiet celebration indoors. Heritage was still too dangerous for children to show on the streets.

The poet Pablo Neruda once asked: “In what language does rain fall over tormented cities?”

In Johannesburg, it falls in fire and is the kind of pure, fine isiZulu normally only heard in KwaZulu-Natal. It speaks in the rounded r’s that sound like the l’s of the school’s Malawian handyman, crying from fear and hunger and sleeplessness after hiding in his flat for days. It speaks in the Zulu names adopted half-jokingly by the Zimbabwean teachers so they can pass as South Africans.

But mostly, the chaotic violence of years prior has now hardened into its own language — one of xenophobia being the reason for joblessness, which can be fixed by a violent clearing of house.

It’s an ideology expressed by men bragging about killing foreigners. It’s Mashaba’s talking head on TV news unapologetic going on about Nigerians even though of the 12 people who died, 10 were South Africans. It’s in the veiled hatred in Twitter comments where South Africans express their disdain for “illegal” people.

We speak a common tongue that is the hope of violence; that if we do unspeakable things to each other we will be able to escape this unspeakably desperate situation

READ MORE: By the time there are xenophobic attacks, you’re practically a refugee yourself

We are yet to see any official — city, province, presidential — come to Jeppestown to bear witness, to assess the damage, to help to rebuild. They remain, of course, absent.

But one, small sliver of hope remains.

Why did izinduna — comfortable with disregarding the power of the Zulu prince — spend two hours in conversation with residents about a primary school? Why, even when hundreds of men rampaged past us again and again, were we pulled back from the brink?

As a school, we hold one, great power: the promise of a different future.

Riot control, bargains on “acceptable” foreigners, haggling for a few more jobs — these temporary and counter-productive strategies would no longer be necessary if people saw their children go on to lead better lives because of the education they were given in schools.

If the hostels’ izinduna can imagine and protect a less violent future for the children of Jeppestown, why can’t the rest of us?

Here is the cautionary tale to the leaders of this country from Jeppe Park Primary: if you can show up for the children in Jeppestown then our future does not lie in violence. Sustain your absence and fire will fall again.

Melanie Smuts is the founder and board chairperson of Streetlight Schools, the nonprofit that established Jeppe Park Primary School