The Democratic Alliance’s most important decision- making body — its federal executive — will meet next week to elect a new chairperson, and unpack the party’s disappointing showing in this year’s national elections. A report will also be tabled, which could recommend that its current leadership be removed.

The meeting is increasingly being seen as a precursor for a battle for the party leadership in 2021.

Former DA leader Helen Zille, who moved to the Institute of Race Relations (IRR) from the party, announced her decision to stand as chairperson days after the IRR backed Western Cape premier Alan Winde to replace Mmusi Maimane, setting the scene for a drive to oust the party’s current leader.

A new chair is needed after James Selfe stepped down. His successor will be chosen by voting delegates at the DA federal council meeting, which sits next week.

The decision makers in that room include the 30 members of the federal executive — the body responsible for the day-to-day running of the party — the DA’s provincial and regional leaders, as well as 24 MPs, 24 MPLs and 24 councillors. An additional 30 voting delegates are drawn from DA members who are not in public office, and are co-opted by the elected federal council members.

In the build-up to this election, a series of leaks to media and opinion pieces — as well as strategic tweets and comments — have shown this election to be a test of the 2021 election for party leader.

The IRR — often ideologically aligned with the DA — has positioned itself against Maimane. Several former and current party members have been employed as researchers or analysts at the institute. Helen Zille was a policy fellow, former DA MP Gwen Ngwenya was the institute’s former chief operating officer, whereas former DA researcher, communications specialist and adviser Gareth van Onselen was its head of politics and governance. 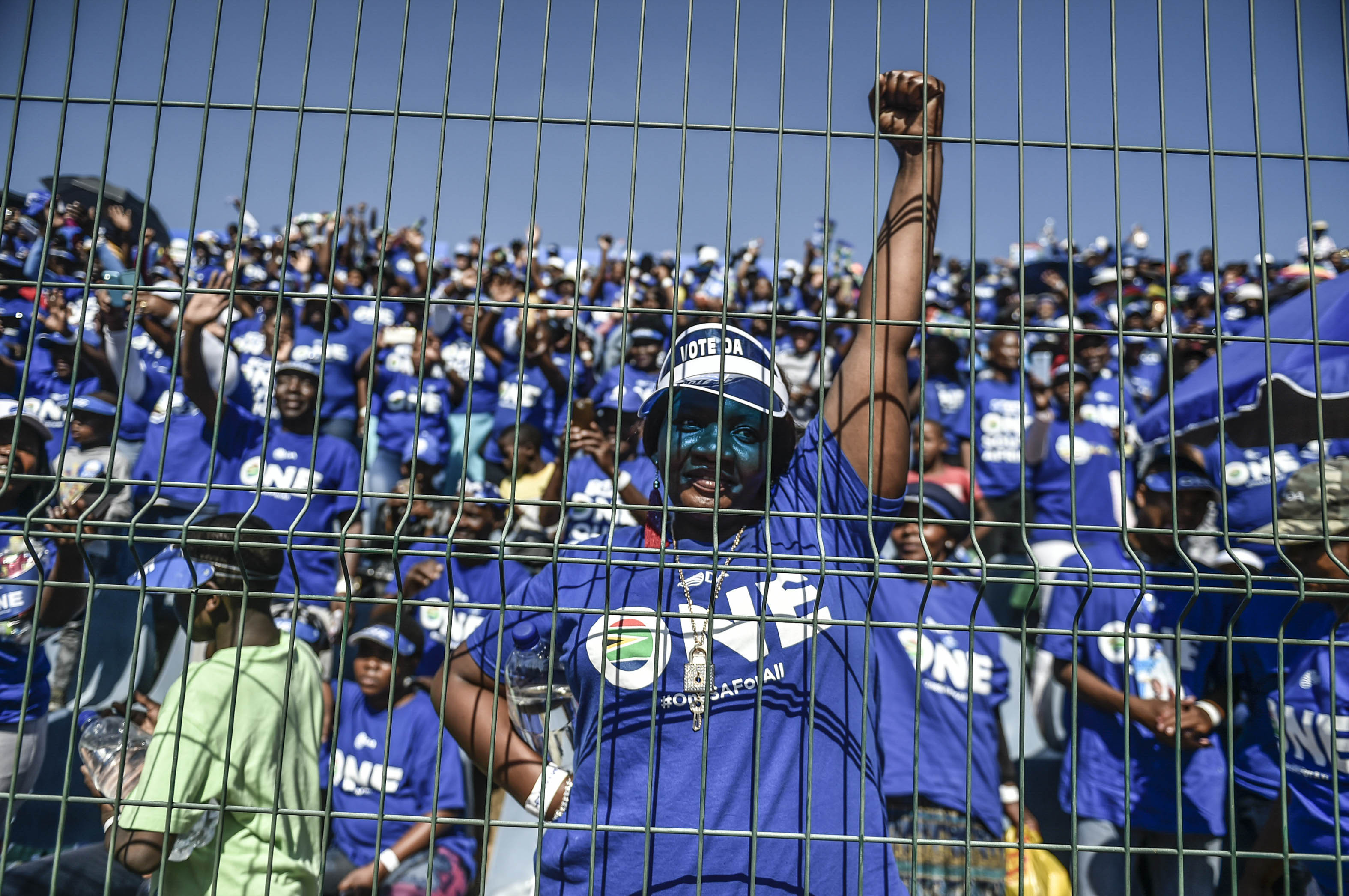 Some people in the DA say that, in general, most members still have faith in him. (Paul Botes/M&G)

Two weeks ago, the IRR published an opinion piece by policy staffer Hermann Pretorius, calling for Maimane to be replaced by Western Cape premier Alan Winde as party leader.

The think-tank this week launched what it called a #SaveTheOpposition campaign meant to be a “reaction to the dire state of opposition politics in South Africa”.

The DA has demanded that the IRR stop trying to influence internal politics. Party spokesperson Solly Malatsi said: “They have sought to influence the internal workings of the party. Starting in the manner in which they used race to punt who should succeed Mmusi, and then target DA members like Herman Mashaba, Phumzile van Damme, and directly attack them.”

Malatsi says in principle there’s no issue with former members of staff joining the IRR — they should just refrain from trying to influence a party they left.

Johannesburg mayor Mashaba also weighed in, accusing the IRR of trying to “capture” the party.

Younger, black members of the DA say Zille and former leader Tony Leon should stay retired and accept that the party has moved on.

Leon stepped into the ongoing DA fracas when he and other leaders of the party approached Maimane to step down. Maimane refused. Instead, he has suggested an early party election.

Eight months after finishing two terms as Western Cape premier, Zille — the former party leader — quit her job as a senior policy fellow at the IRR to announce her candidacy.

She said: “In recent months, the DA has been through a period of turmoil and distress. As a party, it is important for us to reflect, to introspect and to begin the process of reconnecting with voters. If elected as chairperson of the federal council, my objective will be to support the leadership in its goal of stabilising the party and getting it back on track.”

The Mail & Guardian canvassed several DA MPs, who said that they are unhappy with Zille and Leon’s return to internal party politics.

READ MORE: Old and young face off in DA battle

One said: “The risk with people who’ve had their turn and now want to come back is in how it is perceived in public. Some people are unable to let go and allow those who are in charge of leading. If people felt they left far too early, then they must live with the consequences.”

“What is happening here is that ex-leaders are regretting they left because the world outside politics isn’t as fulfilling as they thought it would be. There’s also this sense of mistrust or the belief that those who come after them need to sustain their legacy rather than chart their course.”

DA Youth leader Luyolo Mphithi said those who want to contest positions must also think of how the party is then viewed if it wants to attract young people.

“Anybody in the party has the ability to make their views known to contest positions. I don’t find it problematic… If she [Zille] feels she’s capable enough she has every right to do so. The question we must ask though is what organisation do we want, and how does that organisation look and feel?”

Other party members say that although the party in general still has faith in Maimane, he is being undermined.

Other members whom the M&G talked to feel that the upcoming election for a new fedex chairperson could be seen as a curtain raiser to a 2021 elective conference — where Maimane is likely to be challenged for the leadership position.

A party member said: “With all the public spats in the past few days, we’ve had several members going on radio and TV to say this or that particular leader is not fit to lead. I’d like to think the fedex chair election is not a proxy battle for leadership, but we just have to connect the dots.”

Much of the pressure on Maimane comes from a disappointing election season for the party, where it lost five seats in the National Assembly — going from 89 to 84 seats.

Subsequently, the party has had wards snatched from it in recent by-elections across the country. In these, it has lost out mainly to the ANC and the Freedom Front Plus.

One DA federal executive committee member said the party is panicking ahead of the 2021 local government elections. The big fear is in metropolitan areas such as Johannesburg and Tshwane, where the party has cobbled together co-operative agreements with smaller parties.

The DA has already lost power in the Nelson Mandela Bay metro, where former mayor Athol Trollip was ousted in a vote of no confidence.

Only the City of Cape Town is seen as relatively safe, where the party won a two-thirds majority in the 2016 municipal polls.

“The election results were a difficult reality for us. That is driving all this contestation. People are reacting in different ways in how we recover from this slump we had. It came as a shock,” the senior party member said.

Last week, an internal investigation cleared Maimane of any wrongdoing, after leaked stories questioned his occupation of a house owned by a business partner, and a vehicle donated by Marcus Jooste’s Steinhoff company appeared in the media.

Maimane has maintained that he paid monthly rent, and the party confirmed the vehicle was returned after the party got wind of Jooste’s alleged financial malfeasance.

But Maimane isn’t out of the spotlight just yet. At the fedex election next week, an election review report is also expected to be tabled. This will unpack the party’s electoral performance and will make recommendations as to how to win back support.

“The possibilities for recommendations could be broad,” said one party senior member. “It could hypothetically recommend what type of coffee should be served at DA offices, to a decision that the leader should be removed.”

Malatsi said the review report is not meant to be punitive, but put forward solutions for how the party unifies and attracts voters.

“The party realises now more than ever we need to be united. We need to rally behind a common vision. It is clear the interventions that the leadership has initiated, including the (election) review, are part of the solutions that we need so we can recover from some of the voting losses.”