Police in the North West shut down a cannabis laboratory in Brits on Monday and arrested the owner after finding more than 500kg of cannabis, estimated to be worth R3-million.

De Beer, who calls himself a traditional healer, is a major supplier of cannabis-related products in the country, said police spokesperson Captain Tlangelani Rikhotso. She said De Beer sells his franchises for R25 000 each.

The police found hydroponic tunnels for cannabis cultivation, apparatus for processing and extracting oil, and numerous cannabis products, all of which were seized in the raid.

Canapax’s website, canapax.co.za, advertises products such as cannabis oil concentrate “used to boost the immune system” for R600, Nerve Tonic “for stress and anxiety” for R220, and Acne soap for R195. All have the Canapax logo on them.

De Beer said in a Facebook interview on DQ Central, which focuses on news about cannabis, that he is a traditional healer or druid. “The dispensaries work, fortunately, due to our [former] president Jacob Zuma signing into law [provisions of] the Traditional [Health Practitioners] Act that now allows the dispensary of plants and herbs, which previously were unregulated … [This allows me] to actually practise. So this was a revolution because most of our medicines were forbidden to be given to anybody …”

De Beer was arrested for contravening the Medicine and Related Substances Control Act, which requires any product that makes a medicinal claim to be registered with the South African Health Products Regulatory Authority (Sahpra), in addition to dealing in cannabis, Rikhotso said.

Cannabis, also known as dagga, is a schedule seven drug, a category that includes drugs such as heroin that are not recognised for medicinal use and are said to have a high risk of causing dependency and abuse. 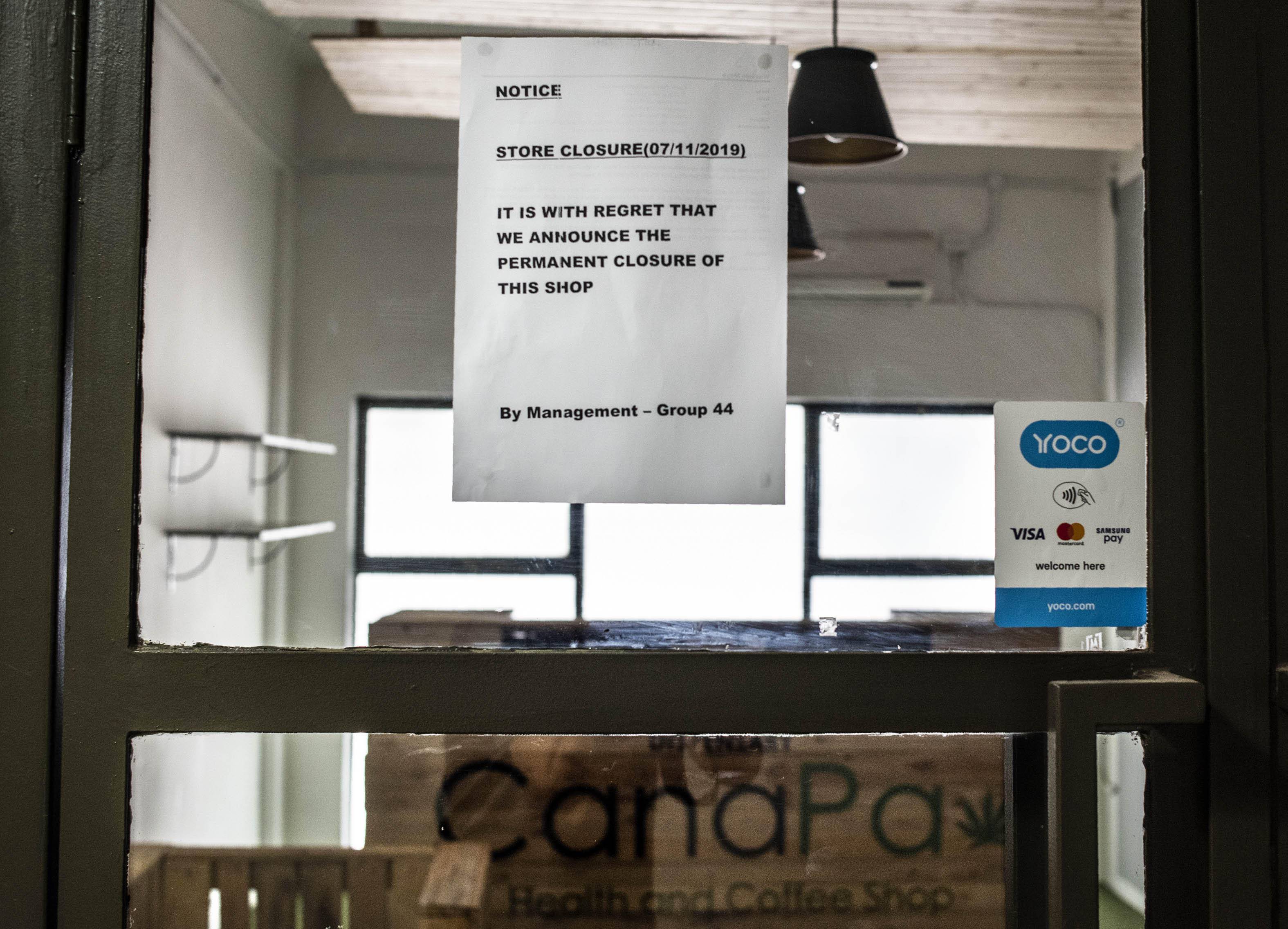 Weeded out: The Canapax store at 44 Stanley closed this week. Its franchisor was arrested for contravening the Medicine Control Act and dealing in cannabis. (Paul Botes/M&G)

On the Sahpra website, a 2016 statement clarifying access to cannabis for the treatment of medical conditions, says it is illegal to cultivate, analyse, research, possess, use, sell or supply cannabis without the necessary authorisation.

De Beer’s arrest, by the police’s organised crime unit of the directorate for priority crime investigation (aka the Hawks), aims to clamp down on the unlawful mushrooming of cannabis dispensaries around the country, which are claiming to be legal in terms of the Traditional Health Practitioners Act.

The Act says “traditional medicine means an object or substance used in traditional health practice for the diagnosis, treatment or prevention of a physical or mental illness; or any curative or therapeutic purposes, including the maintenance or restoration of physical or mental health or wellbeing in human beings, but does not include a dependence-producing or dangerous substance or drug.”

De Beer’s arrest came after Sahpra and the police released a joint statement on November 4 warning that dealing in cannabis in South Africa is illegal. The statement said that the “establishment of illegal dispensaries/outlets, online sites and social media platforms which are marketing and selling cannabis and cannabis-related products to the public remains illegal, except where specifically allowed in terms of the Medicines and Related Substances [Control] Act”.

A Canapax franchise opened on September 17 at 44 Stanley, a shopping and restaurant complex in Milpark, Johannesburg. The shop closed down after just nine weeks of operating. Brian Green, director of Group 44, which owns 44 Stanley, said the owners closed the shop as soon as they realised that the entire operation was a “scam”.

“The proprietor of the store at 44 Stanley provided franchisee documentation that [suggested] the operation was bona fide,” said Green, responding to an emailed question asking if the group were aware of the exact nature of the franchise and if it were legal.

“There were Canapax stores trading nationally, so once we had done our Financial Intelligence Centre Act approvals and due diligence on the tenant we allowed them to trade.”

Pro-cannabis lobbyist Myrtle Clarke of the Dagga Couple, said it supports civil disobedience when people are reacting to an unjust law but are not harming anyone else.

Clarke said the Canapax franchise is a “fraud”, as De Beer appeared to claim franchisees were covered by the Traditional Health Practitioners Act. “There is something in the franchise that registers you as a traditional healer and he issues you with a certificate,” she said.

“Traditional healers have a very specific spiritual calling. I am not saying that I do not believe white people can be sangomas. I think there are some genuine white sangomas but they are few,” she said. “It cannot be that now all of a sudden every second Van der Merwe from Pretoria is a traditional healer. It’s not quite right; it’s actually very disgusting,” she said.

A Canapax franchise in Centurion said on its website, accessed on Wednesday: “Seeing that the Canapax franchise is illegal we have … created an environment that will be suitable for all our members. We are busy designing re-leaf.co.za to bring only the best of the best to you, keeping you healthy and safe”.

De Beer appeared at the Brits magistrate’s court on November 11. The matter was postponed to Friday November 15, when he is expected to apply for bail.