Internal documents show that soldiers, meant to protect South Africa and keep the peace outside our borders, are sexually assaulting people inside the army and while on peacekeeping operations

Shocking statistics have revealed the depth of institutional gender-based violence in the army and that, far from soldiers keeping the country and continent safe, women in the South African National Defence Force (SANDF) are the most likely to be sexually harassed and assaulted by their uniformed male colleagues.

The Mail & Guardian has established that there are at least 41 sexual-related cases that have been reported in just the past 18 months.

According to a recent SANDF internal report, leaked to the M&G, at least 41 members of the army were charged with sexual-related offences, ranging from rape and assault to harassment and crimen injuria. Of those cases, 26 have been finalised, with 13 guilty verdicts and 11 acquittals.

Sexual assault against women in the armed forces is so rampant that in August last year the SANDF held a conference at Air Force Base Swartkop to deal with the reports of sexual assaults in barracks and elsewhere. The report that emerged from the conference painted a bleak picture of how women were being sexually victimised by their colleagues and commanders. In some cases, they would still have to work with their abusers.

The report said: “Women are generally at a much higher risk of being sexually harassed than men, with the vast majority of cases being perpetrated by a male colleague or commander.”

It went on to note that sexual abuse does not happen only when soldiers are sent overseas, suggesting that: “Internal deployments should be dealt with in the same manner and [with the same] urgency as external deployments.”

The evidence of serious sexual abuse in the armed forces emerges against the backdrop of Minister of Defence and Military Veterans Nosiviwe Mapisa-Nqakula telling army generals earlier this month that she had decided to institute an investigation into claims of sexual exploitation and abuse (SEA) in the military.

In a strongly worded letter, Mapisa-Nqakula threatened that this could end in a commission chaired by people outside the armed forces — where matters are normally dealt with internally.

Her letter warned that: “I have become aware of the rampant cases of SEA incidents internally in deployment areas, as well as in the working environment. These are kept under wraps by the commanders. I want to inform you further that I have received numerous reports of SEA and sexual harassment within our units. I have been mulling over these and I have now decided to institute an investigation, short of a commission, by external role players into this scourge.”

She added that: “This approach is because I do not have the confidence that as the military and especially yourselves, generals and flag officers, will provide me with satisfactory reports, given that you have been aware of these and turned a blind eye.”

She said the inspector general, defence intelligence (counter intelligence) and the military police should have done more, and that the complaints should have been brought to the attention of SANDF chief General Solly Shoke and herself.

When an investigation is established, the minister wrote that: “I would therefore expect that they will receive full co-operation from yourselves.”

Despite the M&G being unable to gain full access to the exact details of offences, it was able to establish that in one case in Cape Town, a senior officer charged with a sexual-related offence was fined R6 000 and demoted — but was not dismissed.

In another case in Cape Town, a captain was found guilty and fined R5 000 and demoted to a lower rank of lieutenant.

A brigadier general at Thaba Tshwane military base in Pretoria was charged with sexual-related offences; his trial was scheduled to take place this week. Many of the cases that the M&G analysed fall under section 5 of the Sexual Offences Act.

The largest number of culprits, according to the leaked report, were based in Cape Town, where 17 cases were reported in the 2018-19 and 2019-20 financial years. Thirteen of those were finalised: seven officers were found guilty and six acquitted. Pretoria followed with 12 incidents — six cases were finalised; of these, four officers were found guilty.

The director of military prosecution, Brigadier General Sunita Solomons, told the M&G that each case was assessed on its own merit and that it was up to the courts to pass appropriate sentences. She emphasised that the army treats every sexual-related offence with seriousness.

“If there’s an offence committed there is military police investigation and the person is charged [with] what we call an account of offence … Our [military] courts work exactly on the same principles as the civilian courts … depending on the offence and the rank of the offender. If it’s a [case of] sexual misconduct it will go before … a senior military judge. And the people are charged often in terms of the Sexual Offences Act 32 of 2007. ”

She said that, just as in any other court, sentences depended on the judges who preside over the cases: even if prosecutors may have wanted harsher sentences, it is not up to them to decide.

Sexual abuse in the DRC

As the SANDF battles with sexual crimes internally it has also had to report to the United Nations about dozens of cases allegedly perpetrated by troops in the Democratic Republic of the Congo (DRC). Troops have been deployed to the country — where systematic rape has been used as an instrument of war for decades — to stop violence against communities.

But, for more than a decade, allegations of sexual misconduct, exploitation and assault have been levelled against South African troops deployed in Africa’s second-biggest country.

An internal SANDF document states that at some point the “United Nations considered withdrawing SANDF permanently”.

These documents, dated May 2019, show that there have been at least 21 cases of sexual exploitation and assault reported. These cases include allegations of rape, transactional sex, sexual abuse and exploitative relationships.

Of these cases, 15 were committed by troops from the army, one by the airforce and three by the military health services. Two were unknown as the offenders could not be identified.

Fifteen of the cases have been finalised; nine soldiers were dismissed from the SANDF.

According to the deputy spokesperson for the secretary general of the UN, Farhan Aziz Haq, since 2015 there have been a total of 92 allegations of sexual exploitation and abuse recorded in the DRC. Of these, 34 involved personnel from South Africa — more than a third of all the cases.

He said that when an allegation of abuse is received, the UN “notifies the implicated member state and requests that they appoint a national investigation officer within five days”.

“The United Nations then follows up on a regular basis with member states, including RSA, to ensure that the secretary general is advised of progress on investigations and sanctions. This follow-up includes formal communications, as well as regular discussions at the working level.”

SANDF director of operations and legal support, Admiral Zenisele Kani, said that the defence force takes all allegations of sexual exploitation and abuse so seriously that they have ensured that investigations take place speedily and that army prosecutors are deployed with the soldiers in the DRC, or wherever there is a peacekeeping mission.

“Firstly, there must be no fraternisation [with the local population where the SANDF is deployed], secondly, there must be no issues of what is called transactional sex, where you pay for sex. That is scandalous behaviour … When there are allegations of SEA, SANDF investigates and if there is prima facie evidence we go to [the] DRC to prosecute. At times the [number] of allegations are higher in the UN reports but after our investigations we discover that there are [fewer] because in some cases [the] complainant can’t identify the perpetrators,” said Kani.

Although that process might seem speedy, some of the sexual assault crimes that South African forces are accused of were perpetrated as far back as 2007, and the cases have been completed only this year.

The 12-year-old case saw a corporal found guilty — but according to SANDF internal documents, it received the case only in November last year.

An internal document recording this notes that: “Case to be sent to DRC for prosecution. Matter to be enrolled in DRC in Feb/Mar 19. Matter enrolled for 03 May 2019. Matter finalised. Guilty, discharge from SANDF.”

Of the 21 sexual exploitation and assault cases that the M&G has analysed, five cases were not prosecutable, six are ongoing, eight officers have been found guilty and two were acquitted.

But not all these cases are easily prosecutable. In one case, a woman laid a complaint in the DRC against a major who was working with the military health services. The offence was committed between April and May last year.

According to the notes on the case, the investigator concluded that the matter was ready for trial. It was placed on the roll but the complainant wanted $250 to testify in the matter. “Case could not be finalised due to the witness that did not want to testify without payment,” reads the document.

In a case dating back to June 2011, another captain with the 7 South African Infantry Battalion was found guilty only this year — eight years later.

The report on that case reads: “Charges must be instituted. Letter to be sent to the unit to institute charges by 17 August 2018. No feedback yet from the unit … The Adj [adjudicator] currently on leave. Charges to be instituted 3rd week in Jan. No feedback as on 29/03/19 … Charged on 22 May 2019. The matter was finalised on June 26, 2019. Guilty. Discharge from the SANDF.”

Although there are only a handful of ongoing cases against SANDF members in the DRC, the UN’s Haq said that it will continue to follow up with the member states involved until such time as all required accountability measures have been taken.

“While the vast majority of United Nations peacekeepers, civilian and uniformed, serve with pride in difficult and complex circumstances, we are all diminished by even one allegation of sexual exploitation and abuse. Sexual exploitation and abuse runs counter to the values of the United Nations and damages the communities we are sent to serve,” he said. 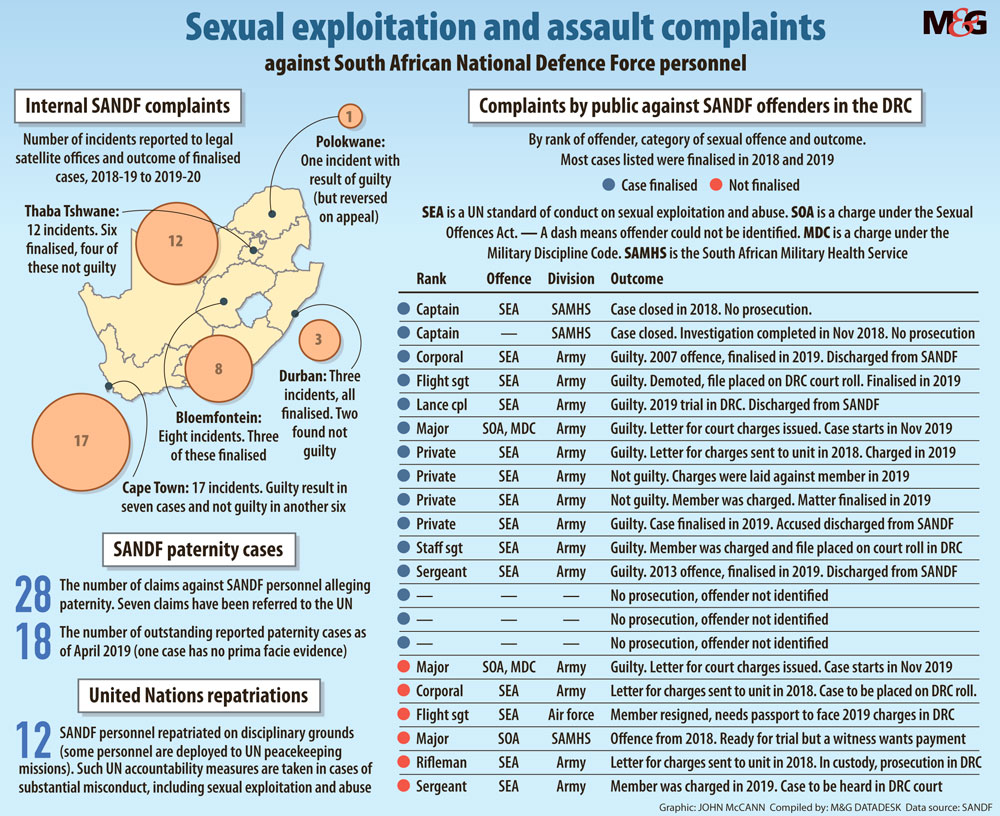