Rich millennials have different financial habits to the rest of their generation. Having come of age during the 2009 Great Recession, many millennials are wary of investing — but affluent millennials tend to embrace it, investing in global markets and alternative investment opportunities such as cryptocurrencies.

Compared to their peers, rich millennials sit on significantly less cash and they have a different viewpoint of debt. The more affluent millennials invest for growth, which means that they overweight their investment portfolios with cryptocurrencies and big tech names such as Tesla, Amazon, Apple and Netflix.

Wealthy millennials — those earning more than R100 000 per month or who have more than R16-million in net assets — behave in noticeably different ways to their less-affluent counterparts, who seem to be in a constant battle to keep their heads above water. What’s more, the millennials (1981-1996) have developed financial habits that distinguish them from Baby Boomers (1946-1965) and Generation X (1966 to 1981).

Investing has become a case in point. Being risk-averse is a hallmark of the generation that came of age during the Financial Crisis of 2009 — yet affluent millennials are investing in growth-focused assets more than ever before. Specifically, they embrace global investment opportunities that are generally outside of traditional go-to investments. 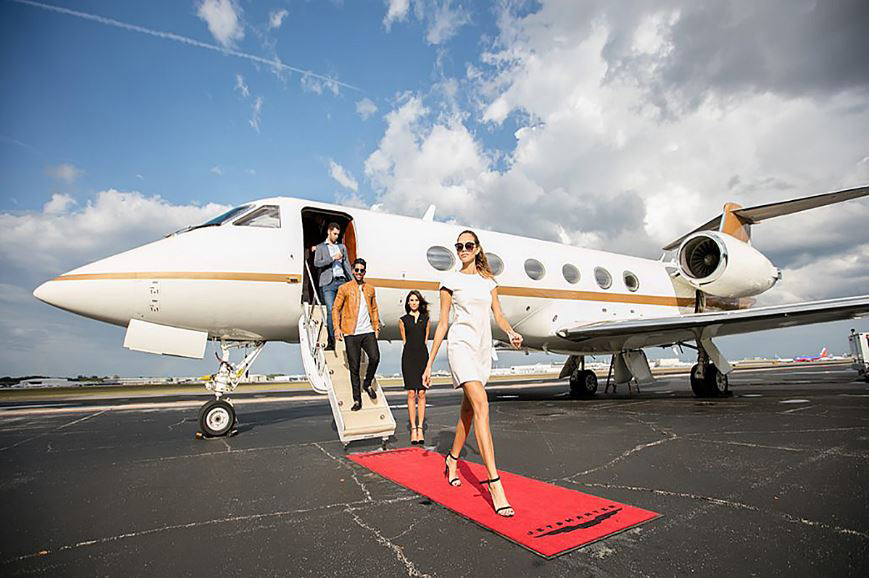 We sat down with Sean Sanders, the chief executive and co-founder of index-tracking crypto-investing platform Revix to take a deeper dive into how the financial behaviour of wealthy South African millennials sets them apart from the rest of their generation.

1. Wealthier millennials understand the difference between saving and investing

It makes sense that the wealthy, regardless of age, are more open to investing instead of saving — investing equates to wealth growth, whereas saving is simply wealth preservation — but this trait has become particularly prominent among rich millennials. As the generation entering the workforce post-recession, most millennials are risk-averse when it comes to investing: in fact, according to a Capital One study, over 90% say they are wary of investing. Blackrock’s Global Investment Survey similarly uncovered an increasingly risk-averse mentality among millennials; it found that 85% of millennials consider themselves “conservative” when it came to risk tolerance, while a majority subset of that group pegged themselves as “very conservative.” By contrast, fewer than a third of baby boomers reported themselves as very conservative investors.

Millennials’ diminished appetite for risk is also reflected in their investing patterns. The survey showed that, on average, only 15% of the millennial investment portfolio is invested in stocks, a sharp contrast to 24% for the baby boomers — an interesting outcome, considering the older group is near retirement or already retired.

However, wealthy millennials differ from their peers in that they embrace growth-focused investing. They’re noted to be more likely to exercise their wealth in alternative investment opportunities such as cryptocurrencies, tech stocks and venture capital funds. Sanders comments: “Rather than being afraid of risk, and avoiding it entirely, many wealthy millennials have educated themselves on the necessity of risk when trying to grow wealth and make returns.”

According to a study by Oppenheimer Funds and Campden Research, ultra-high-net-worth millennials — those with more than R25-million in assets — are taking more calculated risks with their investments. Sanders explains: “Risk should be viewed differently for different people. For some, risk is not only price volatility, which we’ve come to use as a general proxy for investment risk. For others, risk could be choosing investments that don’t achieve certain return objectives or aren’t able to be sold and converted to cash quickly. Wealthy investors, both young and old, better understand risk and use this knowledge to build a stronger investment portfolio.”

2. They carry less cash in their bank accounts

Money lying idle in a bank account is earning low to no interest. It’s not far off from, say, the Great Depression, when people stored their money under their mattresses. At the time, this was considered safer than trusting a bank, and though the millennial generation of recession babies probably don’t use their mattresses as a manner of saving, the emotional underpinnings aren’t that different.

In general, millennials have yet to regain trust in investing money and therefore prefer to hold it in cash. But the safe approach might serve to be just the opposite, especially if you’re young and have years to build up your retirement kitty. “Forgoing returns in the interest of ‘safety’ simply won’t deliver the returns you need to achieve your long-term goals. In fact, it would take an investor over 35 years to double his or her money in cash, assuming a long-term expected return of 2%,” says Sanders. He continues: “This is likely not good news for their future, as it means over the longer term, they’re shutting themselves off from the historically higher returns yielded from investments when compared to cash, and also squandering the compounding advantage of starting retirement planning earlier in life.” 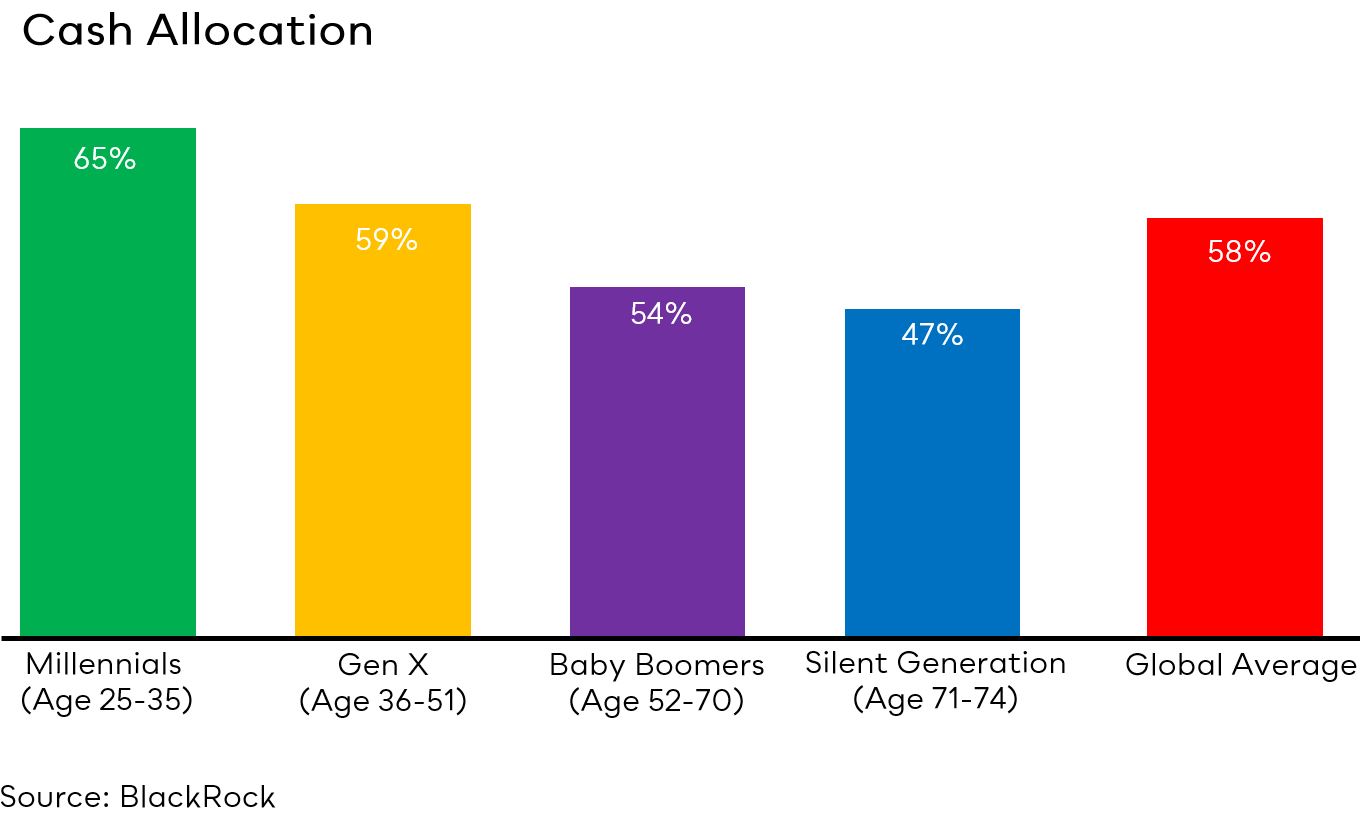 According to BlackRock’s survey, 65% of everyday millennials choose to stash their earnings in cash savings accounts, compared to 59% and 54% for older Boomers and Gen Xs. However, this figure falls below 20% when surveying wealthier millennials. This is a startling finding, as the wealth gap will continuously grow larger every year due to the compounding of investment wealth, a basic function of savings versus investing. Wealthier millennials understand this equation and use it to their advantage.

Affluent millennials eagerly embrace disruption, according to an Edelman report. The report surveyed more than 1 000 millennials who have the equivalent of R2-million in investable assets or an annual income of at least R1.4-million. “Affluent millennials are bullish on new technologies and industry disruptors for achieving their investment goals,” the report states.

According to the report, 25% of millennials use or hold cryptocurrency and 31% are interested in doing so, while 75% believe that technological innovations like blockchain make the global financial system more secure. Sanders says: “Millennials are buying cryptocurrencies over the long term for retirement, because they believe crypto is revolutionising the way value is transferred throughout the world. Smart, modern investors, with a growth mindset are including our crypto Bundles — diversified preselected baskets of cryptocurrencies, similar to index funds — as a key element in their portfolio.”

Millennials are also putting their money where their mouth is — the most popular millennial stock investments are all tech companies: Apple, Facebook, Amazon, Tesla and Netflix, reports Howard Gold of MarketWatch.

“It is clear that wealthier millennials are embracing both risk and technology to their advantage to grow their wealth even further,” says Sanders. Millennials have several options with regards to investing in the more standard type of investments, such as stocks. But, according to Sanders, there are only a few ways for investors to get diversified access to alternative investments, such as cryptocurrencies or venture capital funds. This is why he, together with his co-founder Louis Buys, created Revix, an accessible and easy to use alternative investment platform that gives newbie and advanced crypto investors an easy, responsible and transparent means to access growth-focused investment opportunities. The platform is accessible to everyone, with minimum deposits set at just R500.

Sanders concludes: “Our main focus at Revix is to make investing easier so that many more people have access to and can take advantage of the massive opportunities in today’s markets. We believe that gaining diversified exposure to a bundle of cryptocurrencies is the most responsible approach to investing in this emerging investment class. Crypto Bundles are also unique in that they automatically rebalance once a month, so that customer investments stay up to date with the latest crypto market developments. Top performing cryptocurrencies are included in our Bundles, while the poor performers are removed.”

Virtual money has been around for centuries