The department of home affairs is determining if it can match the R60-million bid by an unnamed investor from Limpopo to buy the Lindela repatriation centre at an auction last week.

The facility, which houses alleged illegal immigrants, was owned by the infamous Bosasa, now known as African Global Operations, which is currently undergoing liquidation.

Its liquidators told the Mail & Guardian that they have received the offer but “it has not yet been confirmed”. This is because the department of home affairs has agreed to try to exercise its right of first refusal on the property with the liquidators.

This right affords the department first preference to buy the property, should the owner ever choose to sell it, or match the bid should the property be auctioned.

“Lindela is an important facility for us the state, and we are interested in making sure that we’ve got access and continue to use it. It is important because it’s where we house people who have been processed for deportation,” said home affairs spokesperson Siya Qoza.

He said the department had discussed this with the liquidator and indicated that it would want to have continued access to the facility — but it wants the price to be “reasonable”.

The department has been leasing the property since 2002, but its contract is ending in November next year. The contract with Environmongz Projects, which maintains Lindela, ends at the same time.

The department currently pays for the leasing agreement and services including accommodation, security, catering and a clinic, at a cost of R9.5-million a month.

Qoza said it wants “access” to the facility — either in the form of another lease agreement or by purchasing the place. The two options will be assessed by the department and it will make its decision depending on which one is the most financially reasonable for it.

The department of public works and infrastructure, as the custodian of immovable assets for the government, has also applied for the same right. Both the departments have 14 days to make a decision about the property.

“The two departments are working together to ensure both that the property transaction is concluded with the best interest of the taxpayer in mind, and in a manner that ensures the confidence of the public that regulatory compliance and questions of value for money have been interrogated,” said the department of public works and infrastructure’s Zara Nicholson.

The bid took place at the three-day auction at the Bosasa headquarters in Krugersdorp in Johannesburg last week. The sale of the property was one of many assets sold to raise money to pay Bosasa’s creditors, as well as the R500-million in taxes owed to the South African Revenue Service.

The bidding for the transit centre opened at R30-million, and it was explained to the bidders that the department of public works had the right of first refusal.

The centre has the capacity to hold 5 000 foreign nationals who are either waiting to be deported to their countries of origin or to confirm their legal status.

On the first day of the auction, there were unconfirmed reports that migrants were being kicked out of Lindela. But the department of home affairs said in a statement that the foreign nationals had left after they completed a process checking if they were in South Africa legally.

The department also said the foreign nationals were temporarily accommodated at the centre in order to determine if they have legal status to be in the country.

The M&G attended the last day of the auction, which took place at the Bosasa headquarters. It was raining, but that did not deter the crowd. 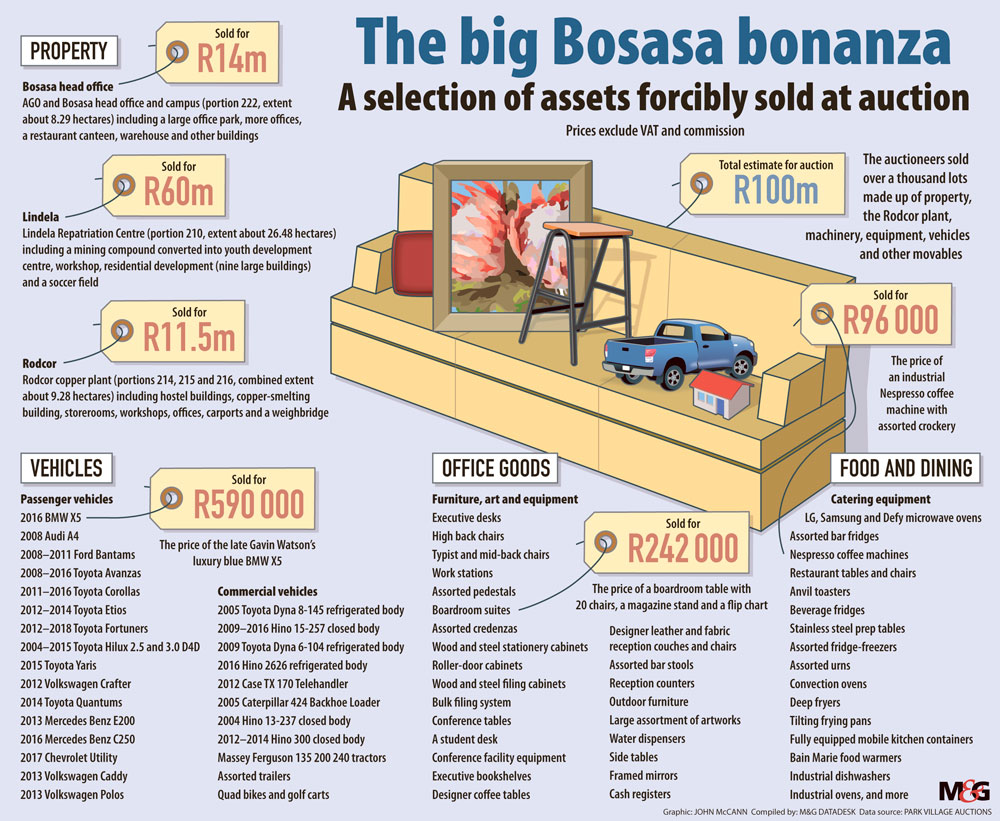 Each bidder had to pay a R20 000 registration fee to take part. On the last day, office furniture, paintings and security equipment were on the lots.

The headquarters is devoid of activity, but it’s still beautiful and spacious. The gardens are lush, with peacocks occupying the green grass.

Auctioneer Clive Lazarus told the M&G the entire auction will raise about R100-million. “It has been a nice crowd and the bidding has been very brisk and good,” he said.

Although all of the assets have been sold off, Watson’s nephew, Jared Watson, who is the current chief executive of what was Bosasa, said he will file court papers to prove that the auction was illegal.

“The sale was illegal. If the liquidators wish to sell any assets, they need to get an approval of Bosasa, but they never did,” Watson said.

He said the liquidators were provisionally selected, and they had no right to sell the assets without the approval of the company.

Before the auction, Watson filed an urgent application in the Johannesburg high court to try to halt the auction so that the company could be placed under business rescue, but it was not approved by the court. The liquidators said Watson’s application was struck off the roll “for the abusive manner in which it was brought, and for the lack of urgency”.

Agrizzi blames R3.3m raft of ailments for not attending court