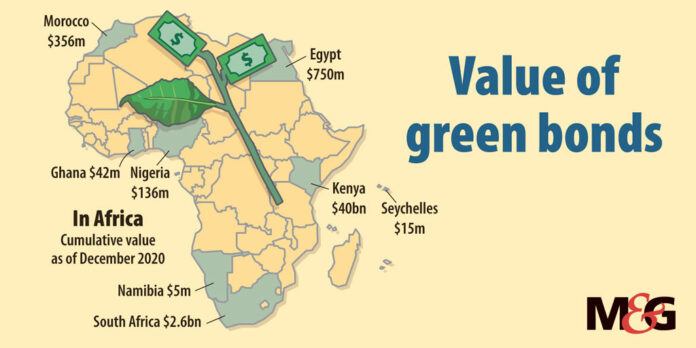 It’s been exactly 14 years since the green bond market kicked off, and precisely four years since South Africa launched these kinds of bonds. But now more than ever, the appetite for these specific investment vehicles is growing as investors look for eco-friendly projects. Even Covid-19 could not slow its popularity.

Now, the Development Bank of Southern Africa (DBSA)  has launched its first green bond amounting to R3.59-billion. The bond, which will assist the bank to finance green projects, was issued through a private placement with the French development finance institution Agence Française de Développement.

Ernest Dietrich, group executive of the bank’s treasury and balance sheet management, said the proceeds of the bond would go towards funding the bank’s “existing and growing” pipeline of climate projects and programmes. The bank has previously supported programmes facilitating the transition to a low carbon economy, such as the renewable energy independent power producers programme (REIPPP).

“The bank’s inaugural green bond issue is aimed at refinancing select eligible climate finance projects in the bank’s loan portfolio. To that effect, it will free up funds for investing in its pipeline of infrastructure projects,” added Dietrich.

The DBSA is tapping into a booming market of raising money to finance specific projects.

According to Climate Bonds Initiative (CBI), which works solely in the $100-trillion bond market for climate change solutions, global green bond issuance rebounded in the second quarter of 2020, reached a record high of $269.5-billion by the end of 2020 and could reach $400-$450 billion this year.

The Johannesburg Stock Exchange (JSE) aid by the end of last year, 12 green bonds were listed, one of which was a new listing. The value of these bonds stands at R9.3-billion. The exchange has more than 1 800 bonds listed at a combined R3.6-trillion.

So what is the hype about? While nations are battling climate change and its effects, which could eradicate civilisation, these investment vehicles are deemed one of the tools that can help fight climate change as they finance green projects.

Beyond that, they also help fund projects that make human beings’ lives better, such as fixing a dilapidated water infrastructure or assisting in building a new one.

Last year, while announcing the country’s economic recovery plan, President Cyril Ramaphosa said that infrastructure development would be at the heart of this recovery.

Ramaphosa said that the infrastructure rollout would leverage R1-trillion in new investment for strategic projects.

In the same year, the minister of public works, Patricia de Lille, said that 62 priority projects were announced in the programme’s first stage. However, “there is a shortage of R140-billion in phase one, and a large part of that will come from green bonds.”

In September last year, Bloomberg reported that De Lille said that the public works ministry and the infrastructure investment office in the presidency have started talks with investors and the JSE and planned to launch its green-bond programme before the end of the year.

But, Shameela Soobramoney, the JSE’s chief sustainability officer, told the Mail & Guardian that it was in discussions with various public and private institutions to list green bonds. “However, we aren’t in a position to speak about any specific information on clients and their intentions at the moment. We will communicate in due course,” she said.

DBSA Chief economist Zeph Nhleko said that South Africa’s economic recovery should incline largely towards being green. Nhleko added that the country is a signatory to the UN Framework Convention on Climate Change and its Paris Agreement; therefore, its plans should be crafted to support those goals.

He said an infrastructure-led growth recovery provides an ideal opportunity to fast track the government’s commitment to sustainable development, including the green economy.

Dietrich explained that historically, infrastructure-based economic development had been used widely to overcome the impact of crises.
“Infrastructure investment is a vital lever in strengthening the economy, creating jobs and enhancing the capacity and reliability of our energy, water, transport and ICT services”.

Although that is the case and new funding models are used to fund this, it’s important to note that for some time now, the country has had an infrastructure backlog ranging from broadband services, housing, schools to name a few.

It said government and public corporations “substantially” increased their economic infrastructure spending over the past decade.

“However, spending on social infrastructure – which includes schools, hospitals and sanitation – has grown at a slower pace”.

This was due to pressure on budgetary resources.

While the government works to secure funding on its infrastructure projects, Dietrich explained that the bank aims to provide support to various activities that will bolster national and local government capacity to manage the ongoing response, save lives and help ensure that the South African and other economics it supports in the continent will recover after the Covid-19 pandemic.

“Past issuances of green bonds have been widely over-subscribed, with demand greatly exceeding supply,” she said.

Jason Lightfoot, a portfolio manager at Future Growth Asset management, said that although the government is looking at raising money in the green market, there is a more than R1-trillion gap in funding for infrastructure development.

“To narrow it, there will have to be a mix of various sources of funding that will be used on the basis of bankable transactions. This can include funding from the banking sector to pension funds and not limited to just only the green market, which is in its infancy.”