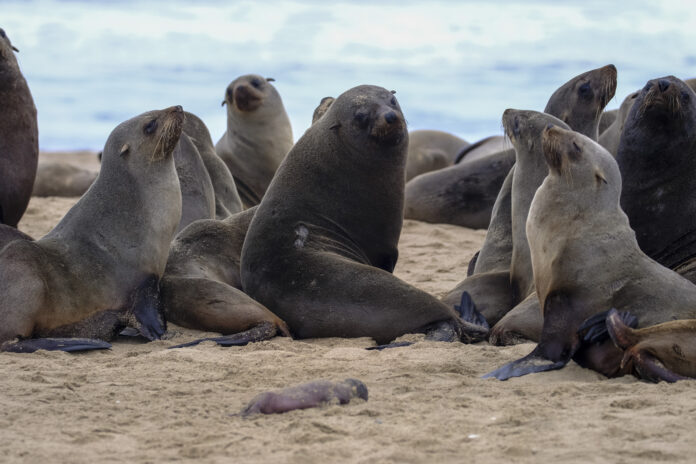 Naudé Dreyer first noticed the bodies of a few aborted Cape fur seals scattered on the white beaches of Pelican Point, near Walvis Bay in Namibia, at the end of August.

The conservationist, who was combing the remote peninsula for fur seals entangled in illegally abandoned fishing gear and marine debris, as he does every day, wasn’t worried.

Every year, there are a few sightings like these in the seal colony: thin, stressed females with low fat reserves who have aborted or abandoned their pups.

But by mid-September Dreyer, of the nonprofit Ocean Conservation Namibia, started to encounter exceptionally thin females arriving on the shores and aborting their pups. “We realised that, sjoe, it’s really getting bad,” he says. “Towards the end of September, instead of seeing 10 dead pups a day, it got up to 100.”

With alarm bells ringing, he flew a drone over Pelican Point earlier this month. The footage was startling. Dreyer calculated that roughly 5 000 premature, aborted foetuses littered the beaches.

“It was really heartbreaking getting to the beach and seeing these sights. The seals are normally quite vocal, but there was a different atmosphere. You could just feel the pain and presence of death everywhere. The females do mourn their pups and often carry them around for four or five days afterwards; nudge them and move them around. It’s just tragic to see.”

Last week, about 350 adult females and juveniles died. “We’re seeing very thin mothers on the beach. Obviously, if these mothers are dying, they can’t give their pups enough to eat, so their pups are also dying.”

His “conservative estimate” is that between 8 000 and 12 000 seal pups have perished in the mass die-off. “From one day to the next it just got exponentially worse, and it just hit home, the sheer scale of this die-off,” he says.

Dreyer believes it has now passed its peak. “Now, it’s just a matter of trying to find answers. We’re collecting samples like crazy, working with labs in South Africa and local vets, scrambling to get some results.”

Cape fur seals are the most common marine mammal observed along the coastline of South Africa and Namibia, where they are endemic and number about 1.7-million animals.

“Seals are crucial for marine health, adds Dreyer. “They’re an important part of the ecosystem because they’re an apex predator and we need them.”

At the height of their breeding season between mid-November and early December, thousands of females synchronously give birth at colonies on the coast. Soon afterwards the strongest males mate with females in their harem and the cycle starts all over again.

“A certain number of deaths at the colonies is a normal part of the seal life cycle and to be expected,” says Tess Gridley, the co-director of the Namibian Dolphin Project/Sea Search and a postdoctoral fellow at the department of botany and zoology at Stellenbosch University. “What’s concerning here is the high number of abortions and the synchronised timing. The impact of this die-off at the Pelican Point colony, and possibly further afield, may be felt for years to come,” she says.

“The female Cape fur seals have, either through a combination of malnutrition, or perhaps a bacterial infection, a pollutant or something else, we’re not really sure, led to a wide-scale abortion event. There can be several different factors that all work together to cause these abortions and it’s quite a complicated process to unravel it all.”

Gridley is part of a team trying to determine the scale of the die-off, including the number of abortions, their developmental stage and location. The other team members are Dreyer, who is leading the sample collection in the field, Simon Elwen from the Namibian Dolphin Project and Brett Gardner, a South African vet who lives in Australia.

Drone footage is being used to help estimate the losses.

“With good quality sampling on fresh foetuses and associated dead adults we have the best possible chance of getting to a specific diagnosis,” says Gardner.

The samples have not yet arrived in South Africa because Convention on the International Trade In Endangered Species of Wild Fauna and Flora permits are required.

In 1994 at Cape Cross, an estimated 10 000 seals died and 15 000 foetuses were aborted in a mass die-off associated with starvation, probably the result of a shortage of fish and a secondary bacterial infection.

Authorities, says Gridley, should remain vigilant and monitor Cape fur seal populations in their range, which stretches from the southern tip of Angola to Algoa Bay in South Africa.

Faced with Covid-19 travel restrictions, 1 200km of Namibian coastline and few official observers, the team has started recruiting citizen scientists to be “eyes on the beaches”. They’re encouraged to drive and walk on the beaches and, from a safe distance, count dead and alive adult seals and premature pups. They’re asked to check whether the adult seals seem thinner than usual.

“We’ve got some good leads so far,” says Dreyer, “but the number of people coming forward isn’t as high as we would have liked — but hopefully more people will join us.”

Save forests to protect us from future pandemics — Harvard scientists