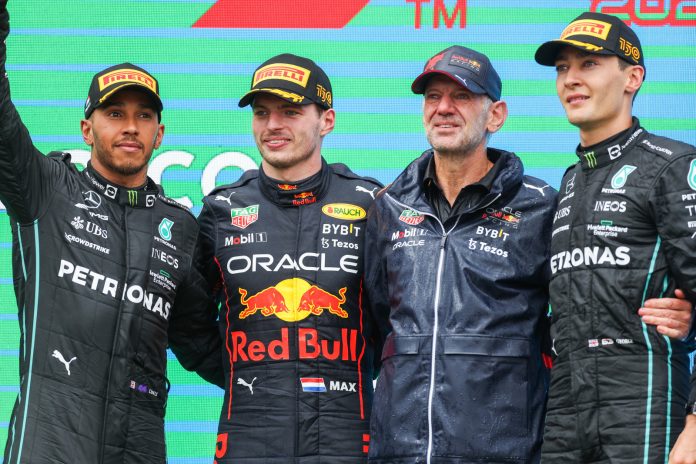 Max Verstappen is turning into a bit of an escape artist, eluding the fate of many in motorsport. Ferrari seems to be gifting him the opportunity to win back-to-back championships. The summer break couldn’t have come at a better time for the red team as they return to Maranello and reassess the way forward. Taking nothing away from Verstappen and Red Bull as they outclassed the entire field to go from P10 to P1.

Qualifying was anything but a foregone conclusion as anyone would’ve expected before the timer started for Q1. There was some drama, as all eyes were on Aston Martin and their new rear-wing setup, which other teams deem to be against the spirit of the new rules. The way they see it, the wing will create more dirty air for any car following the Aston. (Ee do know how these race teams enjoy a good moan when it’s not them thinking of things first.)

The drivers who were in the crosshairs of scrutiny, and not doing their chances for a 2023 seat any favours, included Yuki Tsunoda, who qualified in P16. Red Bull chief whip Helmut Marko, who’s known for not mincing his words, had some choice words about Sergio Perez before the race saying it looked like “he is already on holiday”. Perez didn’t make it out of Q2, thanks to track limit issues, having a lap deleted at turn 5 … and then having it reinstated, only to find that the lap wasn’t good enough anyway.

Sebastian Vettel’s news during the week that he’d be retiring at the end of the season was, again, no big surprise given his poor performances this year — especially in qualifying. This session proved no different. Another talking point, however, was Verstappen’s engine power issue as he wasn’t able to convert his strong start into results. George Russell got the jump on Carlos Sainz by 0.044 seconds, earning the Brit his first pole in his F1 career. What a moment.

Final qualifying results saw Russell steal pole position ahead of Sainz, followed by Charles Leclerc. The championship leader, Verstappen, started in P10 and was definitely one to watch. Grab that popcorn.

Race day. Pierre Gasly’s dismal year continued to go south after a power unit change, forcing the Frenchman to start from the pit lane. I feel some sympathy as he desperately needs a bit of luck to swing his way if he’s to continue his campaign for that Red Bull seat. Lights out and the top three all had a brilliant start, with Russell soaking up the pressure, defending an early turn 1 lunge around the outside by Sainz.

An early virtual safety car proved that Russell had some serious restart skills for the second time in as many weeks, getting the jump on both Ferraris. Verstappen showed tremendous temperament, being able to thread his way from P10 during the first few laps, picking off both Alpines in a class act that could only be likened to walking on rice paper. Slow pit stops then hampered both Sainz and Russell, with the Ferrari team missing out on an opportunity to back out in front of Russell. They might have learned their lesson, though.

Daniel Ricciardo proved to be working on the continuous momentum he had and received a further confidence boost when, on lap 24, he passed both Alpines in one move. A cheeky clap-back in the mid-pack manufacturers’ battle but he later suffered the same fate as Leclerc eventually would, thanks to poor tyre choices.

The mid-race pace of the Ferraris has been strong all season and, with Leclerc inheriting the lead through a quicker pit stop than his teammate, he was right on Russell’s gearbox. With that pace, he passed Russell on lap 31 in what was one of the best overtakes of 2022, lunging at the last split second around the outside of Russell at turn 1.

For the entire weekend we saw low track temperatures dictate using medium and soft-compound tyres. Did Ferrari not get the memo or were they thinking they could defy physics when they brought Leclerc into the pits to fit a set of hard-compound tyres on lap 40? On the charge was Max, who was gunning for the undercut on Lewis Hamilton and Sainz, another key indicator that Red Bull’s strategy was on-point. Leclerc, on the other hand, was never a contender in this battle, given the lack of grip and another moment where Ferrari’s strategy was hopelessly off.

In a bizarre occurrence, Verstappen spun on lap 42, corrected perfectly, and then continued, narrowly fending off Russell and Perez, before picking off Leclerc once more. The hard-compound tyres were clearly nowhere to be seen in terms of pace and Verstappen still managed to capitalise on the undercut against Hamilton and Sainz.

Sainz had another slow stop, which wasn’t his fault, but it hampered his chances anyway. His drive in France, and this unlucky performance, shows external factors are hampering his momentum. Add to that the internal battle between him and Charles. The numbers show Sainz has out-qualified his teammate for the third time this year and he also has more podiums, even though Leclerc is ahead in the championship. Consistency wins in the end and it should be an interesting moment if he jumps his teammate in the points.

Max kept it clean and together with solid team strategy, and happened to outrace and outsmart everyone, deserving the Driver of the Day accolade. As for Ferrari’s strategy, it’s a tough space to be in and, despite all the lifelines they’re getting, I have a feeling someone’s going to have to be held accountable if the team’s current trajectory continues. So, whether Mattia Binotto should start dusting off his CV, time will tell.

Hungary was the last race before the well-deserved summer break after which we reconvene at Spa for the Belgian Grand Prix on 28 August. All hope isn’t lost for Leclerc, but the mathematical odds are now slipping in the wrong direction, and that’s a problem.