Torture and murder in Eldos, but cops couldn’t be stopped for help 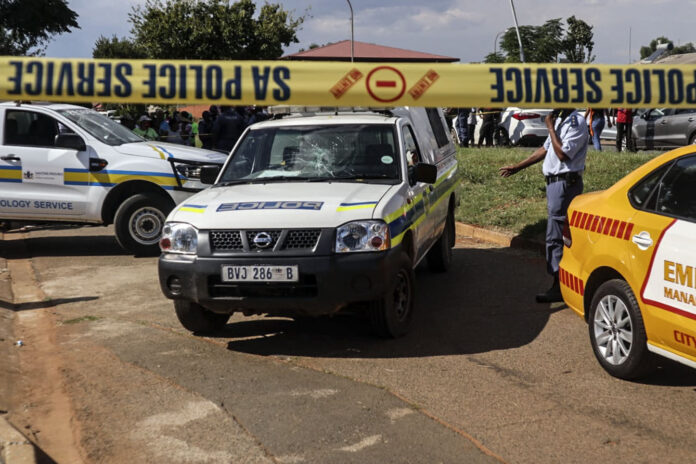 The South African Police Service (SAPS) has again come under the spotlight in Eldorado Park, south of Johannesburg, for allegedly failing to respond to distress calls. Residents heard screams at a house where, several hours later, two men were found tortured and brutally murdered.

Vusi Mathebula, 26, and 27-year-old Franklin Willett, known as “Worsie”, were reported missing earlier in the week.

‘What will happen to me? The others are dead.’

On Friday, 5 March, police and other law enforcement agencies arrived at a newly developed empty rental property at around noon. The house is on a residential street that runs parallel to Boundary Road, which connects Kliptown and Eldorado Park.

A faint stench of decay wafted to the gate, where a crowd stood behind the police line, some threatening to torch the property, others comforting family members who were waiting to see whether their missing loved ones were inside.

Nearly ten hours earlier, harrowing screams from a familiar voice had woken neighbours at around 2am.

Community members began gathering outside the house. Calls were made to the police, to no avail.

Angus Klizanie said he received a call from his aunt that his brother was locked up inside a house in Extension 9.

“I then headed to the house at 2am where I could not find him. At 6am, another friend alerted me that my brother Mikhail was heard shouting for help.

“When I came back, the white car that my brother was taken in had just taken the corner,” he said.

Klizanie says his brother was whisked off as he arrived at the scene. Eyewitnesses said the 29-year-old Klizanie was seen getting into a white car with two men before he shouted to onlookers: “Die ander twee is doed, wat gaan met my gebeur?” (The other two are dead, what will happen to me?)

One community member said several people had tried to hail two Eldorado Park-marked SAPS vehicles at about 7am, but the vans drove off without stopping.

It was only after the community member broke through the gate that a third, Kliptown-marked van stopped to see why the crowd had gathered. Those who peeked through the window reported seeing a blood-drenched mop standing in an empty living area and a curtain dangling from the window, half ripped down.

Bloodstains covered the floor where two caps and a hoodie lay on the tiles.

A first responder on the scene who did not want to be named for fear of being victimised said chains were mounted to a wall, and it is believed the men found inside had been tied up and tortured. He confirmed that a bag of cannabis was found on the scene, while another bag contained hundreds of five-rand coins. The man described how it looked as if the men had been repeatedly burnt while the seemingly disfigured bones of their hands gave the impression that they were being punished for stealing.

Pictures revealed that the bodies were wrapped in plastic, with their hands and feet tied with wire. In another room, another cellphone photograph revealed a bucket with what the responder described as brain matter inside.

The responder believes the condition of the bodies suggests they had been dead for a few days.

The day before, on Thursday evening, community members had discovered a body at the Klipspruit West Cemetery. They now believe these two grisly finds to be connected.

By Friday afternoon, the street was quieter, but families were still looking for answers.

Cleo Anthony, who was also at the scene on Friday morning, said several men abducted her boyfriend, Franklin Willett, from her house.

“My boyfriend was taken on Tuesday night at around midnight by a couple of guys in two white cars. They didn’t seem like police and were wearing balaclavas,” she said.

Families demanded to be let inside the house to identify if their loved ones were inside.

SAPS officials attempted to quell tensions, explaining that it was against protocol to allow the families to identify the bodies at an active scene, suggesting that they would have to visit the state mortuary on Monday. Minutes later, under extreme pressure from an increasingly hostile crowd, officials allowed three family members inside. At this point, Mathebula and Willett were identified.

Sandra Klizanie was able to walk out, relieved that the victims were not her son, Mikhail, whose voice was heard screaming for help earlier that morning.

“Preliminary investigations up to this end have revealed that the deceased were last seen with a third person the previous day. Therefore, police are also probing the possibility that a severely injured body found the previous day at the Klipspruit West Cemetery could be that of a third person whose identity is yet to be determined and will therefore establish whether the two crime scenes are connected,” he said.

On Monday, 8 March, the two suspects appeared in the Lenasia magistrate’s court in connection with the murders.

Magistrate Maggie van der Merwe told the court that due to the serious nature of the charges, bail could only be considered when evidence is submitted in the course of the bail application.

The case has been postponed to 19 March, while the two suspects will remain in custody.

Repeated requests from the M&G for comment from SAPS went unanswered.

This latest development in the area plagued by violence and drug-related crimes comes just months after the murder of Nathaniel Julies drew global attention to police brutality in the South of Johannesburg.

Julies, a 16-year-old teenager with Down syndrome, was allegedly killed by a police officer in Eldorado Park on 24 August last year.

His mother, Bridget Harris, has accused the SAPS of failing to assist her after a police van allegedly sped off with her son in the back.

The murder trial is set to begin in the Johannesburg high court on 19 March. Three SAPS officers are accused of premeditated murder, accessory to murder after the fact, defeating the ends of justice, discharging a firearm in public and possession of illegal ammunition.

Julies’ death brought the area to a standstill when angry residents marched to the Eldorado Park police station and threatened to torch the building.

Nathaniel Julies’ mother frustrated that murder trial has to start over