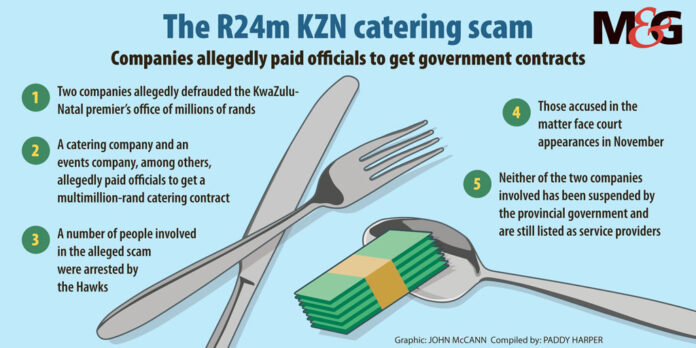 Two companies charged with allegedly defrauding the KwaZulu-Natal premier’s office of R24-million have been appointed to a panel of service providers for the province’s economic development department.

Nto’s Catering and PMG Events have not been blacklisted over the corruption scandal, which blew up last year. Sixteen people were arrested by the Directorate for Priority Crime Investigation (the Hawks) for payments made by the service providers to senior managers and their juniors, who were allegedly instructed to process the paperwork on the contracts in return for bribes.

Instead, the two companies are among those set to be appointed by the province’s economic development, tourism and environmental affairs department to its panel of event management service providers for 2021.

Nto’s Catering, owned by Ntombimpela Mabel Majozi, and PMG Events, owned by Gugu Kheswa, are among the companies implicated in allegedly paying bribes to Ziphathe Cibane, the chief financial officer at the office of the premier, and the office’s supply chain head, Nonhlanhla Hlongwa, in return for VIP catering contracts valued at R24-million.

The 16 accused are out on bail after being arrested in July last year.

In December, together with Roren Engineering owner Ashley Rose, they were hit by the Asset Forfeiture Unit in a raid in which 20 properties and 40 vehicles were seized. Rose had also benefited to the tune of R1.2-million from the scam.

Majozi’s Umhlanga home and the boutique hotel next door, which she also owns, were restrained in the raid, carried out in terms of an order issued by the high court in Pietermaritzburg.

The group will appear in court again on 18 November for a pretrial hearing.

Despite the high-profile arrests and seizures, neither company appears to have fallen out of favour with the provincial government.

According to newspaper adverts placed by the department last month as part of the process to allow appeals from unsuccessful bidders, the two are part of the department’s panel of service providers to provide “professional event management services”.

Nto’s Catering has been appointed as a category A service provider; PMG Events was given category B status.

The contract awards raise questions about the capacity — and will — of government departments in the province to ensure that companies involved in defrauding the state are blacklisted.

The Central Supplier Database managed by the treasury issues a list of restricted businesses that are banned from doing business with the state for a variety of reasons.

Neither Nto’s Catering nor PMG Events are on this blacklist.

Neither are a number of companies nailed for personal protective equipment (PPE) fraud in the province since the beginning of the Covid-19 lockdown.

Companies that were censured and fined by the Special Investigating Unit (SIU) for corruption in the supply of 48 000 blankets to the province’s social development department — Zain Brothers, Gibela Investments, LNA Communications and Ngcome Steam Pot — have not been blacklisted.

A spokesperson for the treasury, which administers the database of restricted or blacklisted service providers, said it was the responsibility of the department that had sustained losses to initiate the blacklisting process.

In the KwaZulu-Natal PPE cases, this had not been done.

Supplier restrictions are effected in terms of the treasury supply-chain management instructions and must be initiated by the affected state institution’s chief financial officer.

“Treasury then assesses and determines whether due process was followed, and if satisfied, the company will be published on the list of restricted suppliers,” the treasury spokesperson said.

Gugu Sisilana, the spokesperson for Premier Sihle Zikalala, said Nto’s Catering “has not recently done any work with the office of the premier on the advice of the department’s supply-chain management”.

She declined to comment further because of the ongoing court action.

She said the province would blacklist any company found guilty of defrauding the state.

Bheki Mbanjwa, the spokesperson for economic development MEC Ravi Pillay, said although none of the companies listed in the notice of intention to appoint were blacklisted by the treasury, the award had now been sent for review.

“The bid was advertised and bids were received from various service providers. The process then went through all the necessary supply-chain management prescripts.”

He said that all the companies complied with all the bid requirements and none were listed as restricted suppliers on the Central Supplier Database, nor had they been blacklisted in terms of treasury regulations.

Despite this, the department would now review the award as a result of the Mail & Guardian’s inquiry, Mbanjwa said.

“The advertised notice of intention to award is a public process to invite any comment or objection.”

“We have taken this media inquiry in the spirit of that advertisement and have referred [the award] for further review by the responsible supply chain management units,” Mbanjwa said.

Neither Nto’s Catering nor PMG Events responded to the M&G’s repeated requests for comment.

Who will head the state capture prosecution directorate?