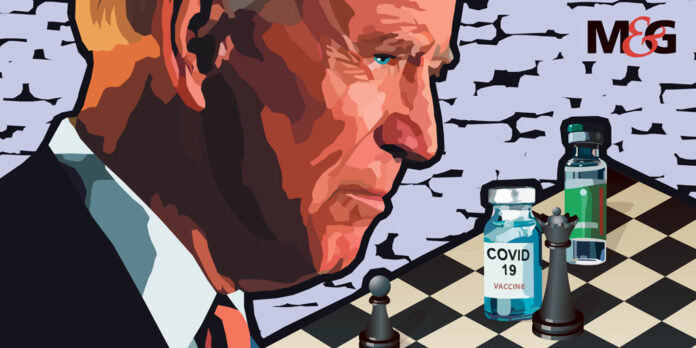 In the middle of 2020, during his campaign against Donald Trump for the United States presidency, Joe Biden sat down for a virtual conversation with Ady Barkan, a health activist. Their stories of dealing with grief and trauma dominated the conversation.

Biden reflected on the story of his greatest tragedy — on 11 December 1972, the day his wife Neilia and daughter Naomi died in a car accident — and the lessons he learnt from that experience.

Barkan has become a leading advocate of equity in healthcare in the US. During his conversation with Biden, Barkan extracted an important commitment out of him: if Biden became president, he would “absolutely positively commit to sharing technology and access to a coronavirus vaccine if the United States developed one first”.

This commitment — made during a campaign, the outcome of which was as uncertain as the question of which manufacturer, country and political regime would win the coronavirus vaccine race — has now become central to the global fightback against the pandemic.

Over the past year, more than 900 initiatives to develop Covid-19 drugs, antivirals and vaccines have been undertaken. Such a wide range of initiatives, tapping into the various parts of the complex global pharmaceutical ecosystem, have pitted humanity against a mutating virus and the sobering history of lethargy and frustration in vaccine development.

The mutations of the virus, affecting countries such as the United Kingdom, South Africa and India, have created unexpected hurdles in the quest for a solution. The history of vaccine development — indicating a low success rate from idea to approval — has seen less than 15 out of more than 200 vaccine development programmes see the light of day.

The poor success rate is a common feature of the pharma business model, which essentially operates as a continuous gamble during which resources are poured into research initiatives and trials that may never yield a workable final product.

For those products that do see the light of day, a subsidisation principle applies where the successful products are priced at a rate that enables the company to recover the costs of developing the product and also plug the financial gap created by the many more unsuccessful products. The enabler of this model — the protection of intellectual property associated with the successful products — has become accepted by the world of drug manufacturing as a sacrosanct contract between society and Big Pharma.

In recent times, as the roll-out of vaccines around the world has followed economic profiles rather than healthcare needs, the rich countries have galloped ahead of the poorer nations in getting vaccines.

The various instruments used to achieve this — ranging from bilateral contracts, better access to financial resources, as well as political concessions and considerations — have amplified the divides between the global poor and the rest. As predicted by various experts in the healthcare sector, the longer the virus exists, the more likely variations will emerge and possibly make the existing vaccines redundant.

South Africa became the first nation to experience this dilemma when its initial batch of vaccines arrived after a new variant had been identified that made the vaccines redundant and their roll-out cancelled.

In recent days, as another president has participated in a political campaign aimed at boosting the prospects of his party, his country has seen a surge in daily infections and deaths that have crippled the country’s healthcare system.

Narendra Modi — once positioned as the man in charge of a country with the largest manufacturing facilities for drugs, primarily through the Serum Institute of India — is now better known for presiding over the most uncontrolled surge in infections in the world. The emergence of a new variant in India has added another complexity to the Modi government’s already disastrous pandemic management strategy.

The rest of the world is lagging in vaccine programmes because of problems with finances, indemnity programmes and production capacity. For countries that had no financial capacity to enter into multiple bilateral deals, the primary source of vaccines has been through the Covax facility of the World Health Organisation (WHO), which sought to acquire and distribute equitably to many nations rather than watching everyone take part in a vaccine race where poor countries would be the losers.

Its capacity to convince rich nations to pour resources into the combined fund rather than prioritise country-specific bilateral deals, has been less than effective. By the beginning of this week, 58 million vaccines had been distributed to 122 countries by the Covax facility. At the same time, the UK has administered more than 53-million doses to its citizens.

The WHO — having set up its no-fault compensation fund — has acceded to this demand but hasn’t seen that translating to a faster vaccine delivery programme.

South Africa and India have lobbied for the waiver of intellectual property protections regarding the Covid vaccines and related products.

In its proposal to the World Trade Organisation (WTO), the countries argue that a key driver of the vaccine delivery bottleneck is that countries with manufacturing capacity are unable to use it in the absence of the blessing from the holders of the intellectual property rights. As a result, a waiver is being sought that will enable whoever has capacity to produce whichever vaccine they can produce.

The initial response was simply that the waiver of such rights would be the death knell to innovation in the sector that would lead to a diminished capacity to carry out expensive and risky research.

Such an argument is premised on the idea that opening up intellectual property waivers in this pandemic would lead to an open season where future research may be similarly hijacked by governments without due compensation to drug companies.

Big Pharma argues that the waiver is ill-advised not because it creates a future financial disincentive but because the countries that would seek to benefit from the waiver have no capacity to produce vaccines at a scale that would make a difference to the pandemic. Rather, the exercise would damage the sacrosanct contract relating to intellectual property and do nothing to assist control the pandemic.

This turn of events — pitting commercial against moral considerations — is reminiscent of the fights relating to antiretroviral (ARV) treatment for the HIV epidemic just over 20 years ago. What swayed the arc of history towards preserving lives rather than prioritising profits was the activism of civil society and the ability of governments to bypass patents held by the developers of ARV drugs.

Whether that approach is to be pursued in this case will hinge on the ability of the WHO, the WTO in particular to convince the rest of the world that multilateralism and global solidarity is the single most important arsenal to achieve global immunity. The evidence so far — where the WHO has had to rely on the benevolence of the wealthy to gets its Covax facility working — indicates that personalities much bigger than the WHO’s Tedros Adhanom Ghebreyesus and the WTO’s Ngozi Okonjo-Iweala will need to step in and steer the direction of political and pharmaceutical leaders towards a human solution rather than a financial one.

Last week the Biden administration said it would support a move to waive intellectual property rights for the duration of the pandemic. This decision injected a new life into the quest for a waiver. To get this done, the WTO — still ruled by consensus — will require all its member states to agree. Anyone who follows the WTO and its profound inability to ink together deals will know that this possibility remains remote.

The Biden move — a commitment to sharing technology and fair provision of the vaccines — represents a rare instance of a political campaign promise translating to action. Whether Biden can use his powers of persuasion to convince the rest of the world, particularly Germany and the European Union to adopt a similar approach is a test as important as the question of whether the world as we know it will now become a planet of health hemispheres — the vaccinated and the condemned.