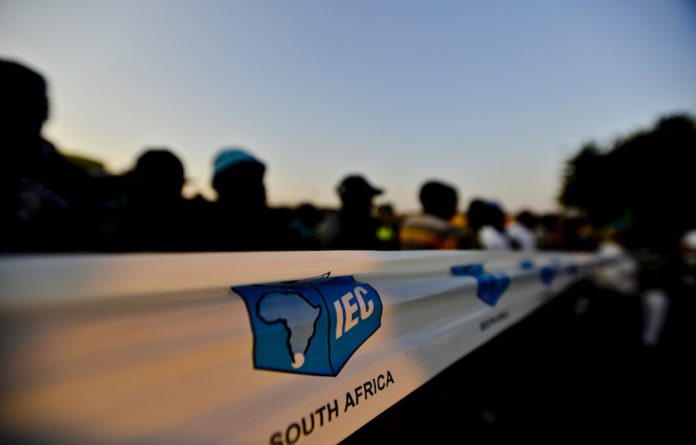 As the leader of a local party registered with the Electoral Commission of South Africa (IEC) to contest local elections, I applied to intervene in the constitutional court application to delay the local government elections.

Since I had no funding, I decided to self-represent. I would not advise this because it’s risky but I believed circumstances warranted it. No one contested my admission so I was in and allowed to speak. Once judgment is delivered, we will see if my intervention was useful.

Legal speak for “I don’t respect you” starts like this: “With the greatest respect.” But I do mean this: former deputy chief justice Dikgang Moseneke has a deserved reputation as a great judge and it is a travesty that he wasn’t made chief justice. But even your heroes can be wrong.

Although I have never attended a single law lecture or opened a legal textbook, I do have some idea of how the law works. I have been part of or observed numerous cases over the past 10 years and read a lot of case law and legal filings (probably too much; one reason that I never advanced to full professor).

But I did not enter the case with the absurd view that I knew more about constitutional law than the small army of advocates the other parties threw at the case.

I went into this mainly to pound the facts.

In my view, Moseneke and the IEC erred in two significant respects: how they interpreted the epidemiology and in narrowing the political landscape to electioneering.

On epidemiology, though I am not an expert, I know enough to know that uncertainty is information. The experts increasingly differ and are more uncertain the further in the future they look. This is not because they do not know what they are talking about but precisely because they do.

In October, the risks are reasonably clear, though there can always be curveballs in the way the pandemic unfolds. If we go forward to February or later, we have unknowable risks such as a new variant, not yet known, or, in more general terms, immune escape. The Delta variant, I put to the court (citing a recent Lancet paper), is so contagious that even the government’s improved vaccine target doesn’t preclude another major outbreak early next year.

The political landscape is where I present new evidence: the general breakdown and failure of local government is feeding into a mood of anger that is hard to contain. I outlined the way the government had been ordered by the high court to dissolve Makana municipality — now under appeal — and a short summary of the long litany of our problems by way of example.

Whatever the real reason for the July unrest that ripped through KwaZulu-Natal and Gauteng, it built on this mood of anger.

I also referred to the 3 August Economic Freedom Fighters’ rally in Phoenix, Durban, where hundreds of supporters were bused in with no masks and no social distancing.

All of this clearly fits the definition of a superspreader event.

This sort of political activity happens between elections and is hard to regulate. Yet, during an election, the Electoral Code of Conduct gives the IEC the teeth to penalise violations.

Preparing for argument in court is a new thing for me. I had no idea what to expect so it was just as well that I was put second-last before the IEC got to respond. Once I heard the terms of oral argument — 20 minutes for intervenors, of which 10 was uninterrupted, I could start working on what I should and should not say. I also took note of the fact that the judges did not want repetition.

As argument progressed, I refined my speaking notes. While pounding the facts was always the intent, I noted points of law as we went along, but deleted most of them. The expert constitutional lawyers ahead of me raised them long before I could. The only point of law I felt worth mentioning is the question of whether the voters’ roll as currently implemented is constitutional. Because this is not essential to this case, I did not elaborate, though I do in my papers.

What is the problem with the voters’ roll? Something I had not understood before is that being on a national voters’ roll is not part of the Bill of Rights, it is a foundational provision in section 1 of the Constitution, which requires a special majority of 75% to overturn. By contrast, the Bill of Rights is subject to the possibility that there is a valid reason to overturn a right, under section 36.

If something is such a fundamental right, why does it make sense to require registration to assert it? You don’t need to register to ensure the right to life, for example. The only reason to do so is to respect the territorial nature of some elections — for example, avoiding a party busing supporters in from a stronghold to an area they couldn’t win. This is not an easy problem to solve and should not be solved just to get this election on track.

My intervention was designed to put more information to the court so they could make an informed choice, not to win at all costs.

Overall, this is a big, complex problem and I do not envy the position the IEC finds itself in.

So where does that leave us? We await the outcome of the judgment. I proposed that those who asserted that a registration weekend was possible in a 27 October timeline work with the IEC to produce a list of obstacles that would be in the competence of the court — for example, temporarily overturning legal or financial obstacles. That could be the basis of a settlement. But I am not a judge or even a lawyer so I don’t know where this will go.

That someone like me with no legal education can intervene in the highest court in the land is of great credit to our system, even if it fails on so many other levels. Justice expensive is justice denied.

For me, the costs of intervening were extraordinarily low. I had to print my founding affidavit to get it certified; everything else was done electronically. I did drink more tea than usual while awaiting my turn to talk.

As I heard one of the other intervenors asking for the costs of three counsel, I lamented the fact that  I had not requested costs. Then again, would the court grant me costs of three cups of tea?