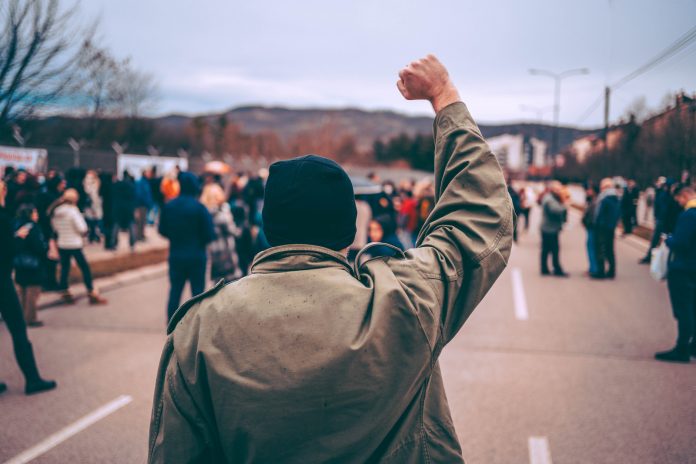 War is an ugly part of the human experience. Everything about it is hideous. War is most obviously the act of invasion and the brutality that goes along with its operations. No war is precise; every war hurts civilians. Each act of bombardment sends a neurological shudder through a society.

World War II demonstrated this ugliness in the Holocaust and in the atomic bombing of Hiroshima and Nagasaki. From Hiroshima and the Holocaust rose two mighty movements, one for peace and against the perils of further nuclear attacks, and the other for an end to the divisions of humanity and for a nonalignment from these divisions.

The Stockholm Appeal of 1950, signed by 300 million people, called for an absolute ban on nuclear weapons. Five years later, 29 countries from Africa and Asia, representing 54% of the world’s population, gathered in Bandung, Indonesia, to sign a 10-point pledge against war and for the “promotion of mutual interests and cooperation”. The Bandung Spirit was for peace and for nonalignment, for the peoples of the world to put their efforts into building a process to eradicate history’s burdens (illiteracy, ill health, hunger) by using their social wealth. Why spend money on nuclear weapons when money should be spent on classrooms and hospitals?

Despite the major gains of many of the new nations that had emerged out of colonialism, the overwhelming force of the older colonial powers prevented the Bandung Spirit from defining human history. Instead, the civilization of war prevailed. This civilization of war is revealed in the massive waste of human wealth in the production of armed forces — sufficient to destroy hundreds of planets — and the use of these armed forces as the first instinct to settle disputes.

Since the 1950s, the battlefield of these ambitions has not been in Europe or in North America, but rather it has been in Africa, Asia, and Latin America — areas of the world where old colonial sensibilities believe that human life is less important. This international division of humanity — which says that a war in Yemen is normal, whereas a war in Ukraine is horrific — defines our time. There are 40 wars taking place across the globe; there needs to be political will to fight to end each of these, not just those that are taking place within Europe. The Ukrainian flag is ubiquitous in the West; what are the colours of the Yemeni flag, of the Sahrawi flag, and of the Somali flag?

Return to peace, return to nonalignment

We are overwhelmed these days with certainties that seem less and less real. As Russia’s war in Ukraine continues, there is a baffling view that negotiations are futile. This view circulates even when reasonable people agree that all wars must end in negotiations. If that is the case, then why not call for an immediate ceasefire and build the trust necessary for negotiations?

Negotiations are only feasible if there is respect on all sides, and if there is an attempt to understand that all sides in a military conflict have reasonable demands. To wit, to paint this war as the whims of Russian President Vladimir Putin is part of the exercise of permanent war. Security guarantees for Ukraine are necessary; but so are security guarantees for Russia, which would include a return to a serious international arms control regime.

It is not merely sentimental to reach back to the past to breathe life into the non-aligned movement of today. Already the contradictions of the present have raised the spectre of nonalignment in parts of Africa, Asia, and Latin America. Most of these countries voted against the condemnation of Russia not because they support Russia’s war in Ukraine, but rather because they recognise that polarisation is a fatal error.

What is needed is an alternative to the two-camp world of the Cold War. That is the reason why many of the leaders of these countries — from China’s Xi Jinping to India’s Narendra Modi to South Africa’s Cyril Ramaphosa — have called, despite their very different political orientations, for a departure from the “Cold War mentality.” They are already walking toward a new nonaligned platform. It is this actual movement of history that provokes us to reflect on a return to the concepts of nonalignment and peace.

Nobody wants to imagine the full implications of the encirclement of China and Russia by the United States and its allies. Even countries that are closely allied with the US — such as Germany and Japan — recognise that if a new iron curtain descends around China and Russia, it would be fatal for their own countries.

Already, the war and sanctions have created serious political crises in Honduras, Pakistan, Peru and Sri Lanka, with others to follow as food and fuel prices rise astronomically. War is too expensive for the poorer nations. Spending for war is eating into the human spirit, and warfare itself increases people’s general sense of despair.

The warmakers are idealists. Their wars do not settle the major dilemmas of humanity. The ideas of nonalignment and peace, on the other hand, are realistic; their framework has answers to the children who want to eat and to learn, to play and to dream.

This article was produced by the Morning Star and Globetrotter.

Roger McKenzie
Roger McKenzie is a reporter for the Morning Star. He is the general secretary of Liberation, one of the oldest human rights organisations in the United Kingdom.

Vijay Prashad
Vijay Prashad is an Indian historian, editor and journalist. He is the chief editor of LeftWord Books and the director of Tricontinental: Institute for Social Research. He is a senior non-resident fellow at Chongyang Institute for Financial Studies, Renmin University of China. He has written more than 20 books, including The Darker Nations and The Poorer Nations. His latest book is Washington Bullets, with an introduction by Evo Morales Ayma.
Facebook
Twitter
WhatsApp
Linkedin