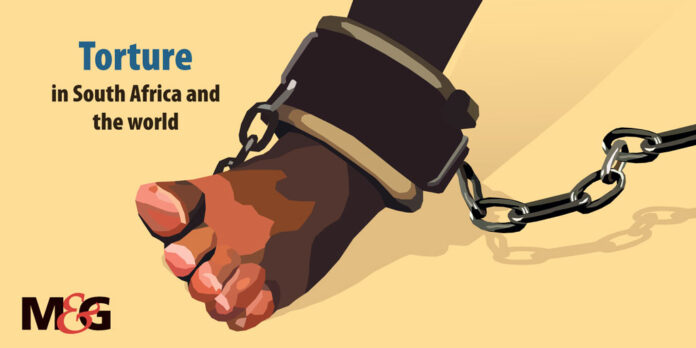 “When we arrived at the Durban Deep Mine, it was already dusk. With a rope tied around my neck and my wrists cuffed, the police officers lowered me into an abandoned mine hole using a rope tied around my neck. They released a police dog into the pit. The dog mauled me from head to toe and I could not defend myself. I was in shock to the extent that I could not cry anymore. I did not think I was going to die; I knew I was going to die.

“After what seemed like eternity being bitten by the dog, two of the men jumped into the mine hole and got the dog off me. One of the men stood in front of me while the other one stood with a rubber tube behind me as I knelt on the blood-soaked earth. The one in front asked me how I feed goat kids when their mothers abandon them. I responded that I use a bottle with a teat. He then unzipped his trousers and shoved his penis in my mouth ordering me to demonstrate for him how the kids sucked the teat. I hesitated.

“The one behind me placed the rubber tube over my mouth and nose to suffocate me as the rest of the men above the pit taunted me: ‘Call Mandela and Malema to come and save you.’ After several minutes of drifting in and out of consciousness, I eventually obliged and sucked the man’s penis until he ejaculated in my mouth and my face … These people are barbarians.”

These are the words of Takele Mahlabela, a 42-year-old labourer who ekes out a living by tending to his small stock in Snake Park, Soweto. Takele’s offence in November 2019 was failure to give the officers information on the whereabouts of a man wanted in connection with a case of stock theft.

Takele’s saving grace arrived in the form of distant shouts: “We have seen those vehicle registration numbers. If you kill him, we will report you.” He reckons the voices belonged to zama zamas (unauthorised miners), who operate in the area, and must have seen the group of about eight white men torturing him. The officers pulled Takele out of the open pit and drove him to Potchefstroom police station and then to Ventersdorp, where the torture continued over the course of a few days.

While being duty bearers, in terms of international human rights law, to prevent torture, many states reward and promote torture of political opponents, human rights defenders and people suspected of committing common crimes either directly or tacitly.

An all-white police unit with a cuffed and bloodied black man in democratic South Africa is reminiscent of apartheid. After almost three decades, little has changed, but although the race of the perpetrators is often not white, torture victims still retain a black face.

Like many liberal democracies that have committed to the prohibition of torture, South Africa is still to transform its commitment to actual compliance. Takele’s case was reported to the Independent Police Investigative Directorate, but for the past two years the police watchdog has been “investigating” — the standard dismissal by investigative bodies in South Africa.

Only 1.3% of more than 30 000 police brutality cases involving police crimes ever reach the courts. The National Prosecuting Authority (NPA) regularly declines to prosecute because of unsubstantiated accusations or lack of evidence. The veracity of the NPA’s justifications is hard to establish for a body that has been the subject of controversy and alleged executive interference since its establishment in 1996. Police cover-ups, corruption and lack of political will are also rampant in a country where the police service scooped top spot for corruption among all government departments.

As with the torture of detainees during apartheid, the aims of torture are manifold: to acquire information, elicit confessions, punish or sometimes simply for sadistic ends. The continued prevalence of torture is evident in departmental statistics, databases of civil society organisations, media articles and interaction with victims.

An average of 200 cases of torture are reported to the police watchdog annually, but this is certainly a fraction of the actual scale of torture in South Africa. The majority of torture cases go unreported for fear of reprisal or victims not knowing the procedures for reporting torture.

The ramifications on society are far-reaching. Various studies show how the use of torture has contributed to generational trauma, an entrenched culture of violence and lack of social cohesion.

South Africa’s neighbour, Botswana, is one of Africa’s oldest democracies. But even in this “beacon of democracy”, the police routinely torture people with impunity. Little is known of the middle-income country, often praised for being a “shining example” of democracy by outsiders unaware of its track record of brazen acts of torture.

In Botswana, there is no real prospect of torture becoming criminalised through legislation anytime soon despite the prohibition of torture in Botswana’s Constitution. The state has neither enacted laws criminalising torture nor established mechanisms for its prevention. Botswana, like many African democracies, ratifies international human rights treaties only to save face in the eyes of the international community.

International human rights organisations have condemned Botswana’s continued use of torture and other forms of ill-treatment, but are less aware of the widespread use of torture and maiming by police officers, including waterboarding, breaking of bones, hooding and assault of detainees (often leading to death).Botswana does not have a database or statistics on torture and other ill-treatment; nor does it have law enforcement watchdogs or national human rights institutions to hold the state accountable. In the rare cases that torture is reported, victims have to report torture by police officers or the military to the police. Furthermore, the absence of anti-torture laws means that even if criminal sanctions were to be instituted, the remedies would be for common law crimes such as assault or assault with intent to do grievous bodily harm.

Ralf* was a junior non-commissioned officer serving in the Botswana Defence Force when he was tortured by members of the Botswana Police Service. Ralf was wrongly accused of stealing an Uzi submachine gun from his battalion’s armoury. He was blindfolded and taken to a secluded area where he was suffocated with a tube, waterboarded, kicked and slapped, losing hearing in both his ears.

During the ordeal he was threatened with being killed and buried where “no one would ever find him”. Having acquired no information from him, the officers released him without charge to face his physical and mental scars — scars that may stay with him for the rest of his life. Despite overwhelming medical evidence proving the torture suffered by Ralf, eight years after his ordeal no action has been taken against the officers.

More victims continue to emerge with stories of torture by Botswana’s law enforcement agencies. Victims who seek to report their ordeals have been told: “Once you are in police custody, you become the property of the state to deal with you as it pleases.” Unfortunately, many citizens believe this because they are not aware of their human rights.

The police use torture to circumvent the “difficult part of policing” — acquiring evidence by carrying out proper investigations. Police often play the role of prosecutor, judge and punisher. Where members of the public have attempted to record the police crimes, their recording devices have been confiscated and the footage destroyed. Police threaten those who report torture with trumped-up criminal charges and detention. Witnesses have reported hearing screams from police interrogation rooms with interrogators ordering the suspect to “talk’”

For decades, under the leadership of Robert Mugabe, Zimbabwe was a torture hub. The military junta that toppled Mugabe through what some euphemistically call a “military assisted transition” in 2017 seems only to have stepped things up. The widely documented abduction and torture of female political activists Joanna Mamombe, Netsai Marova and Cecilia Chimbiri in May last year is but one example.

In all three countries torture is condoned. If we are to do away with torture once and for all, Zimbabwe, Botswana and South Africa will need political will and strong institutions.

*Name changed at the request of the interviewee for security reasons.

Tshepang Edwin Makwati is a graduate of the Royal Military Academy Sandhurst, a human rights attorney and a Canon Collins scholar. He is a PhD candidate with the University of the Witwatersrand. This article was developed as part of the blog project, Troubling Power: Stories and Ideas for a More Just and Open Southern Africa, which marks the 40th anniversary of the Canon Collins Trust

Tshepang Edwin Makwati
Tshepang Edwin Makwati is a graduate of the Royal Military Academy Sandhurst, a human rights attorney and a Canon Collins scholar. He is currently a PhD candidate with the University of the Witwatersrand, focusing on torture and other forms of ill treatment. He also deals with digital rights and data protection as well as holding corporates accountable for human rights violations.
Facebook
Twitter
WhatsApp
Linkedin