The few book launches I have been to have been pretty staid affairs. There’s someone who introduces the writer who, before reading a passage from the new book, might say a few interesting things.

Some in the audience pose a few questions, but as most have not read the book yet, those feel a bit like questioning platitudes. Part four of proceedings is about the autograph: buyers of the book will go up to the author for the obligatory signing — even literati feel the need to participate in this manifestation of the cult of the celebrity.

The Eastern Cape launch of Thando Mgqolozana’s book, A Man Who Is Not a Man (UKZN Press), was anything but dull. Mgqolozana introduced his book — about a circumcision that goes wrong — at WordFest, a forum for writers at the National Arts Festival in Grahamstown. Before that Mgqolozana was introduced by Siphiwo Mahala, author of When a Man Cries, a staffer at the Department of Arts and Culture and a Grahamstown-born Xhosa man.

I mention Mahala’s ethnicity because what he says about the book is informed by the fact that he is a writer himself and understands the Xhosa culture of circumcision better than I do. At the Cape Town Book Fair last month, where the book was launched, Mahala said A Man Who Is Not a Man is the ‘most comprehensive” book written about the rite. In a review Mahala emphasised his point by saying ‘very few published texts interrogate this custom” in the way this novel does.

At the Grahamstown launch a big, imposing man who described himself as a traditionalist said his impulse was to ‘smack” Mgqolozana because he has mentioned what shouldn’t be mentioned in front of women and the uninitiated. Mgqolozana has broken the dictum that what happens on the mountain stays on the mountain.

Mandlakayise Matyumza, the executive head of the Centre for the Book, infused raw paternal emotion into the proceedings when he revealed his anxiety for his son, who, at that moment, was in the mountains undergoing the snip.

The novel is about Lumkile, a boy partly raised by his father in Gugulethu, Cape Town. When his single mother, a rural schoolteacher, hears that her son has slipped into juvenile crime, she summons him to come to live with her parents in Ngojini, her ancestral village.

A Man Who Is Not a Man begins with Lumkile in hospital. (He is lucky: the Mail & Guardian reported last week that 37 people died in the Eastern Cape last month.) He agonises over his fate and his story. ‘But there I was, defying the customs and tradition and destroying the whole culture. What guilt could be greater than the guilt of destroying the culture of your people?”

His circumcision has gone wrong. As a result he has been forced to seek help at the hospital. Lumkile has failed to become ‘a man” in ‘the supposed way”. This Xhosa way of becoming a man is ‘winding and thorny”. It’s not enough not to have a foreskin: ‘There are many people who don’t have foreskins and whose ceremonies we attended, but they are not necessarily men …”

Before winding up in hospital Lumkile was wary of encroaching modernity. Talking about nurses helping initiates in trouble, he once said this sounded like ‘an unwanted intrusion into the culture of our forefathers”. This was all to change when his penis began to fester. Someone who pays him a visit on the mountain takes a frightened look at Lumkile’s sexual organ and wonders whether he has ‘been cooking this penis”.

Sitting alone in his mountain hut, Lumkile doesn’t know what to do. Is he going to defy the ‘notion that what happens at the mountain stays at the mountain, and never [become] a man in the eyes of the community?” Or would he rather lose his ‘whole manhood” — which he would have symbolically buried — on the mountain? If things go horribly wrong he could even die, as do the scores who die every year around this time.

A Man Who Is Not a Man seems to be in involved in an intimate, inter-generational dialogue with Chinua Achebe’s Arrow of God, a book that also examines rigid cultural practices that imploded with the advent of the white man and his religion. Unlike Oom Dan, a patriarch in A Man Who Is Not a Man who admits that ‘the times are changing”, the main figure in Achebe’s novel, Ezeulu, is of the opinion that only his interpretation of his religion is valid.

The priest of Ulu, Ezeulu would rather have his whole community perish than eat the last yam that would make it possible for his people to harvest and stave off a famine. We can’t feel pity for the lone, tragic figure of Ezeulu, who spends his last days in demented delirium when his people desert Ulu’s religion for Christianity.

A Man Who Is Not a Man is brave, not only for removing the shroud from what happens on the mountain but also for its subversive message : ‘Remember this, mkwetha [initiate]: from today, you are a man in your own right.” Someone seems to be telling Lumkile to make his own rules, to devise his own codes of masculinity. I think King Shaka must have felt like this when he abandoned the circumcision ritual among the Zulu nation.

I have approached the book almost from a sociological viewpoint and may have underplayed the fact that A Man Who Is Not a Man is a beautifully written story, with a romantic subplot, boasting its own idiosyncratic diction informed by tsotsitaal and Xhosa idioms and ritual.

It is a brave book, triumphant and a testament to the indefatigable will to live. 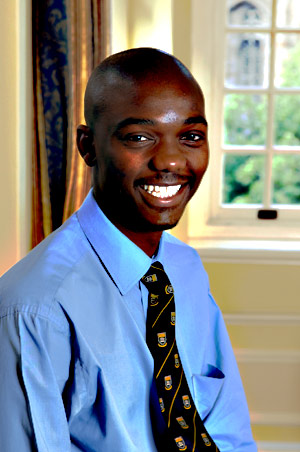 From the mouth of the author
Thando Mgqolozana introduced his novel, A Man Who Is Not a Man, at the annual WordFest forum during the National Arts Festival in Grahamstown. This is an extract:

Imagine that you live in a world where innocent young boys are dying, eaten by a cultural practice gone wrong. They die, sometimes get amputated and lose their manhood, but certainly all the time they take with them a baggage of physical and psychological trauma, for life.

You are their mothers, fathers, brothers and sisters.

So do imagine it.

Imagine that this demise of your children troubles you and many others in society, as it should, but none of you is allowed to comment about this, because of cultural prescription. So the loss of your children is met with silence, your silence.

Imagine that your current and past governments have not and still do not save those lives. They are silent, too.

Your collective silence is so loud it has become an ‘anthem for doomed youth” as Wilfred Owen put it.

Perhaps, in your imagined world, not all these youths die. Some of the survivors get ostracised from their community because they did not complete the rite of passage in the expected way. They too, because of their supposed failure, hide in silence, as though silence was a sanctuary.

It is this disquieting reality that has prompted me to break the silence and talk about the cultural practice that I experienced first-hand. And for this reason alone, I feel like I have more than earned the right to break that silence, and start a debate of reconstruction, or perhaps, if need be, total deconstruction of that which kills.

Writing this book was not a daunting task, but deciding to publish it was; because like many, I had been too comfortable in my silence. It was not the silence of contentment, but that of fear.

In my imagination it was better to be silent than to be labelled, disowned and criticised. But as the phenomenon has consumed me beyond all endurance, the fear is no longer, and so is my silence.

A Man Who is Not a Man is a story of hurt and suffering, but it is also a story of triumph and overcoming. True, it is a work of fiction — but it is much more, as you will find.