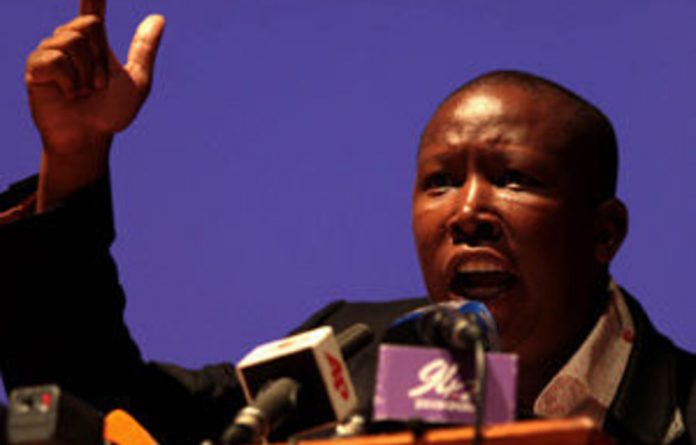 African National Congress Youth League (ANCYL) leader Julius Malema came out swinging on Monday, taking aim at the media after reports that his companies had been awarded more than 20 contracts, worth between R500 000 and R39-million, between 2007 and 2008.

Malema, who convened a press conference in the lobby of Luthuli House in downtown Johannesburg on Monday afternoon to “clarify” reports of his seemingly opulent lifestyle, said that after his election as the president of the ANCYL he had instructed his lawyer to “process” his resignations from all corporations and companies he was involved in while based in Limpopo.

“I issued the instruction because I vowed to dedicate all my time to serve and give undivided attention to the ANC Youth League as a full-time president,” Malema said in a press release.

“I, from 2008, stopped being an active director of the companies that I was previously involved in because all my time was dedicated to the service of the organisation.”

African National Congress Youth League president Julius Malema on Monday took a swipe at the media following recent reports of an extravagant lifestyle. Watch his response to allegations on video.

He said “R100-million can be asked in ransom if my child was abducted”.

“I will take legal action against the Star newspaper and consider doing the same with other newspapers.

Malema said if the South African Revenue Service or other legitimate body requested details of his financial affairs, he would provide them.

The Star reported last week that Malema bought a three-bedroom home in Sandown, Johannesburg, for R3,6-million in December 2009. He had another home in Polokwane for which he apparently paid R1-million.

Malema said his property was being financed by a bank loan, and that he owned one car — a Mercedes Benz C63.

He also mentioned that his salary was more than R20 000 per month.

The Sunday Times reported at the weekend that Malema’s companies were awarded more than 20 contracts, worth between R500 000 and R39-million, between 2007 and 2008. Malema said he was not going to “dignify these misrepresentations and lies” with comment, but said he needed to clarify allegations so that ANC supporters are not fed wrong and misleading information.

‘Reprehensible that Malema exploits the poor’
Meanwhile, Malema has come under severe fire from youth organisations for his luxurious lifestyle, and the way he funds it.

According to Ernst Roets, chairperson of the youth forum, the awarding of tenders to the value of millions of rands to a person with political influence is already unethical and an investigation is necessary to determine whether the awarding of the tenders was also done in an illegal manner.

“It is reprehensible that Malema exploits the poor to gain political influence, while enriching himself in a dubious manner from funds earmarked for service delivery to the very same poor,” Roets added.

The Inkatha Freedom Party Youth Brigade was beating a similar drum, adding it feels the revelation that Malema made millions from government tenders is proof that that the ANC is rotten to the core and that the ANC’s jobs-for-pals-policy is bankrolling ANC politicians at the expense of the very people they claim to represent.

“Malema claims to represent the interests of the poorest of the poor but he has now been exposed as nothing more than a hypocrite,” said Pat Lebenya-Ntanzi the IFP Youth Brigade chair.

“Malema constantly reminds opposition parties that he is the sole voice of the marginalised, poor and oppressed but we are thankful that this has now been rubbished as nothing more than cheap, political rhetoric.”