Calls mount for Aristide to return to Haiti 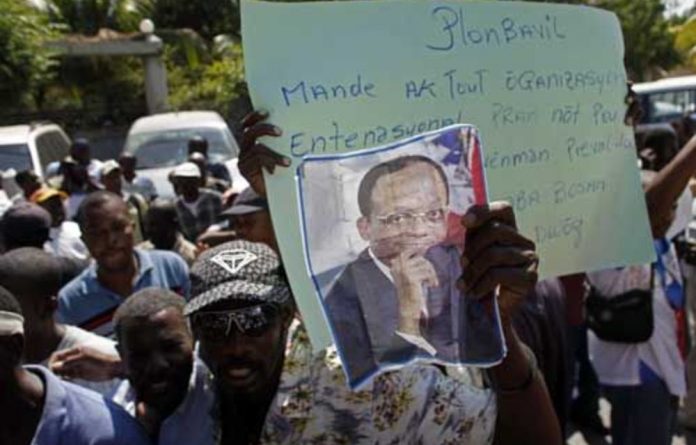 The burnt-out church where he once preached to the poor in a Port-au-Prince slum is in ruins, but the graffiti on its stone walls is defiant: “Titid come back,” it says, “quick, quick.”

Titid — known to the rest of the world as Jean-Bertrand Aristide — was forced out of Haiti six years ago, but the suffering wrought by last month’s devastating earthquake has intensified calls for the return of the Catholic priest who became the country’s first democratically elected president.

Such calls are due in part to frustration with President René Préval over his low-key response to the disaster, but also to an enduring allegiance among many of the poor to the hope Aristide once represented.

“He should have come back already,” said Joseph Wilfred, a 48-year-old father of three now sleeping on the streets near the Saint Jean Bosco church, where Aristide gave fiery, politically tinged sermons.

‘If he were here for this catastrophe, he would have handled it better.”

Aristide, once a passionate advocate for Haiti’s downtrodden who many accused of having grown hugely corrupt by the time he was forced from power in 2004, now lives in exile in South Africa.

Aristide has made no secret of his want to return to his country.

Three days after the massive quake hit — killing 217 000 people and leaving more than a million homeless — he told reporters he was ready to help. It was not the first time he raised the possibility.

Calls for his return
Protests have broken out in the capital since the January 12 earthquake over the lack of food and shelter, with a number of demonstrators urging the diminutive figure (his nickname means Little Aristide) to come to their rescue.

Graffiti throughout the capital — and even on a rock at a mass grave for quake victims outside Port-au-Prince — calls on Aristide to come back, while support runs deep in the slums surrounding his former church.

“If he were here, we wouldn’t be in this terrible situation,” said Wesline St. Hilaire, a 32-year-old mother of seven who lives in a tent in front of the nuns’ convent at Saint Jean Bosco.

She spoke as she sat on the ground cutting chicken parts covered in flies and tossing them into a pot, a church mass being held under tents a short walk away.

There was misery all around her, with buildings up and down the street crumbled and people taking up residence on the filthy ground. A child urinated on the roadside.

Aristide rose to prominence by railing against Haiti’s dictators in sermons, including the infamous Duvaliers, who held power from 1957 until 1986.

In 1988, his church was attacked and burned as he held mass, killing several people. Aristide went into hiding.

Only the shell of the building remains now, and the earthquake appears to have caused further damage.

‘The Americans don’t want him him back’
Aristide was elected in 1991, but was overthrown in a coup the same year.

He returned to office in 1994 with backing from the United States, but fell out of favour with Washington amid claims of vote-rigging in the 2000 elections and political violence.

An armed rebellion in 2004 led to his exit. He has maintained ever since that the United States and France forced him to leave.

Father Wim Boksebeld, a priest at Saint Jean Bosco, said though he admired Aristide’s fight for the poor, he did not think he should return.

“The Americans don’t want him him to come back,” he said.

He spoke of Aristide’s sermons and how he had denounced what he called a “banana regime”, but said that the ex-priest moved too fast for his country.

Peter DeShazo, director of the Americas program at the Washington-based Centre for Strategic and International Studies, said Aristide generated great hope which he failed to deliver on.

“And in the end, by the time he left the country in 2004, the country was pretty much in shambles,” he said. “You can’t put all the blame on him, but certainly he deserves his share.’

Aristide’s return could cause more instability at a time when coordination is needed in the urgent aid effort following the quake, he said. “Any divisive element would be unhelpful,” said DeShazo. — AFP