Zuma in UK: A royal welcome, but don’t mention the press 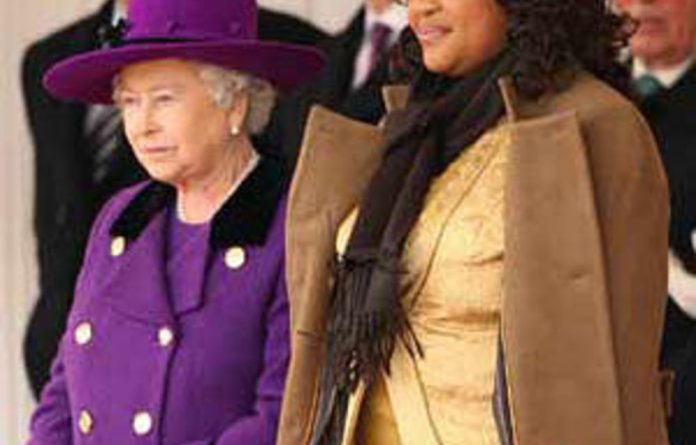 Jacob Zuma, who emerged from a Bentley on Wednesday to shake Queen Elizabeth II’s hand and receive a formal welcome, was a study in sartorial sobriety. Those hoping that the charismatic and often controversial South African president would bring a touch of KwaZulu-Natal exoticism to central London were destined for disappointment.

Instead, the 67-year-old premier rolled up in a dark grey suit, dark overcoat, black shoes and black scarf. His sensible attire was echoed by the heavy coats and patriotic scarves of his fellow South African delegates, who looked on proudly from the sidelines, and complained from time to time about the unpredictable cruelty of Britain’s springtime and the predictable cruelty of its press.

It was left to Zuma’s third concurrent wife, 38-year-old Tobeka Madiba Zuma, and the queen to inject a little colour into proceedings with their respective outfits of gold and purple. Zuma’s muted clothes reflected his desire to reiterate that, despite his five marriages, 20 children and turbulent political and personal past, he is a potent figure on the international stage.

Not only is the African National Congress (ANC) veteran head of one of the most important developing countries in the world, he is also the pre-eminent regional powerbroker and a man who could help cure the United Kingdom of one persistent headache: Zimbabwe.

Sadly for Zuma and his entourage, much of the media coverage so far has focused on the man rather than the office. His aides are furious about the “disrespectful” reports that have greeted this week’s three-day state visit, not least one newspaper’s description of Zuma as a “sex-obsessed bigot” and “vile buffoon”.

Zuma himself was sufficiently incensed by the comments to risk offending his hosts. Hours before meeting the queen, inspecting the guard of honour and listening to the band play both Nkosi Sikelel’ iAfrika, and God Save the Queen, the president told the Star that he was fed up with being judged and sneered at by a country with a hypocritical attitude towards its former colonies.

Memorabilia
There were, however, no discernible signs of that anger as he smiled and chatted with the queen before climbing into the Australian state coach for a trip down the Mall to Buckingham Palace. As the coach drew away, the queen pulled a blanket up to guard against the chill and the president of South Africa, who joined the ANC at the age of 16, wiped his nose with a handkerchief.

At the palace, Zuma was treated to a private view of memorabilia relating to the UK’s links with South Africa. There were personal photographs recording the queen’s first visit to Zuma’s country as Princess Elizabeth 63 years ago.

That was a trip that yielded two famous moments. The first was the future queen’s promise to devote her life to the service of the Commonwealth. The second was the queen mother’s misidentification of a loyal subject; when a man jumped on to the running board of the royal car, she feared the worst and beat him off with an umbrella. It later transpired that he had been trying to give Princess Elizabeth a 10-shilling note as a present on her 21st birthday.

On Wednesday, the presidential Bentley rematerialised on the streets of a north London suburb as Zuma indulged in some political nostalgia.

The three-storey Edwardian house at 51 Alexandra Park Road, in Muswell Hill, made an unlikely shrine, but, as the green plaque on its front attested, the building had played a crucial role in the fight to end apartheid. For 30 years it was home to Oliver Tambo, the once-exiled president of the ANC, and a beacon for freedom fighters, politicos and intellectuals. The house has been bought by the South African government and could become a museum.

The posters on the staircase — “ANC demands one person, one vote in South Africa” — and the huge framed photo of a smiling Zuma, already offered a succinct chronology of recent South African history. Returning to the house, said Zuma, brought a bittersweet time back to life. “The reflections [we shared] were about the struggle,” he said, after unveiling a plaque in the company of Tambo’s son, Dali, and guests including David Steel and Glenys Kinnock. “Some of us used to come here to give reports and bring messages. It does bring back those days when we could not speculate about when would be the day of freedom.”

‘An honourable man’
The house holds more memories and more ghosts for Dali Tambo, who can remember the great gatherings, the break-ins and the knowledge that his family was under constant surveillance.

“It was very much a home to all South African exiles from any faction within the struggle,” he said. “We always felt that if we were going to land anywhere in the world apart from your own home, the best place was London. My mother called it a soft landing as you were landing in a liberal democracy.”

As he waited in the cold for the presidential motorcade to arrive, Tambo, who was educated in London but lives in Johannesburg, pondered Zuma’s progress from visitor to Muswell Hill to visitor to Buckingham Palace.

The Zuma he remembered, he said, bore little resemblance to the cartoonish and libidinous man the press was presenting. “You’ll always have the media caricaturing politicians and I guess that’s part of their job,” he mused. “But it’s unfortunate that it ignores a very noble personal history. He has spent his entire life fighting for the liberation of his people. We view him as an honourable man.” — guardian.co.uk