Soccer City up and running 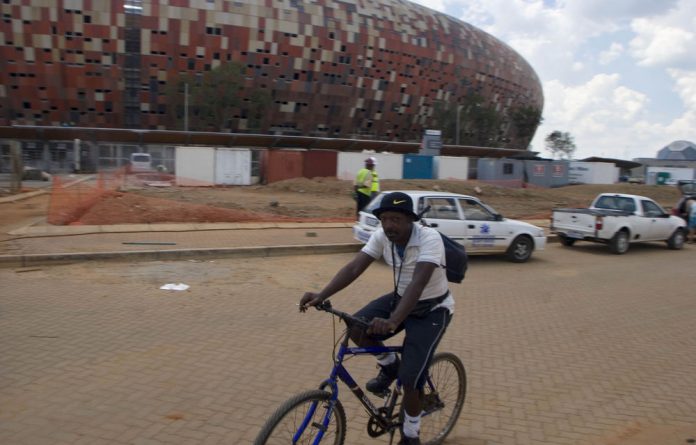 Unlike its counterparts in Mpumalanga which have been battling to get things right at the Mbombela Stadium, Soccer City stadium is ready to host any football match.

With less than 100 days to go before the World Cup kickoff, this week Soccer City was handed over to the Johannesburg municipality by the contractor, Aveng Group, and its subsidiary Grinaker LTA.

The R3,2-billion Soccer City stadium, which resembles a calabash, will host the opening ceremony, first match and final game, as well as five first-round matches, one second-round match and one quarterfinal. The stadium had its seating capacity increased from 80 000 to 94 000.

Roger Jardine, chief executive of Aveng Group, said pessimists had been proved wrong. “Like an African calabash that securely stores food and drink, this calabash-inspired stadium will securely hold almost 90 000 fans who will witness the opening match of the World Cup,” said Jardine.

“Soccer City is the largest stadium to be built for the World Cup.

“It took construction workers 10-million injury-free hours to build. The stadium is ready to host the World Cup. I have no doubt that the stadium will host a world-class event,” he said.

The stadium boasts up to 193 suites and 2 700 seats set aside for the media, 860 parking bays and 77 concession kiosks. The pitch looks perfect for a stadium that will host a number of important matches during the World Cup.

From the outside Soccer City still looks like a construction site, far from completion. But the municipality and the contractor are adamant that all the external works will be completed before the end of March.

Sibongile Mazibuko, Johannesburg 2010 coordinator, said: “The stadium will be fully completed by March 15. The contractors are now busy with roads leading to the stadium, parking and the Bus Rapid Transit system.

“We are also working closely with Telkom and Sentech which are currently busy with the installation of cables between the stadium and the media centre across the road at Nasrec. This stadium will have the most cables because of the media centre.

“From next month the stadium will host a number of testing events, including Nedbank cup matches and a Bafana Bafana friendly match.”

To ensure that the stadium doesn’t become a white elephant after the World Cup, the municipality has appointed National Stadium South Africa to manage it. The company will run community programmes on HIV/Aids, catering, security management and stewarding at the stadium.