The test is in the tasting 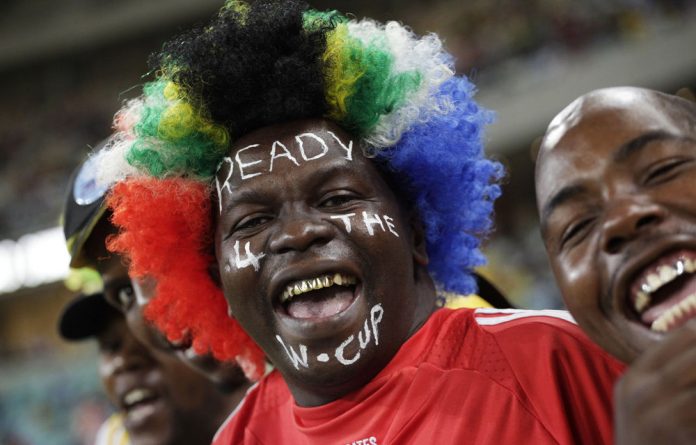 Warning: Prolonged cynicism about Fifa’s intentions in South Africa can lead to all sorts of dreadful side effects.

Especially after word had spread on Tuesday — during the commemorations to mark the 100-days-to-go until the 2010 Word Cup kick-off — that the press corps would be locked inside Durban’s Moses Mabhida stadium for the entire event. For security reasons, mind you.

Before another seminal sporting spectacle on African soil, the Rumble in the Jungle between George Foreman and Muhammad Ali in Kinshasa, Sese Seko had sought to send a message out to local criminals by imprisoning a mob of them inside the stadium where the heavyweight bout was to happen — and executing some.

With the media, and the English tabloids especially, still revelling in bouts of rabid Afro-pessimism, Tuesday seemed the perfect opportunity for Blatter to send out a bloody cute message to the Fourth Estate. But he was in his usually loquacious mood, nattering on about the “love story” between his organisation and the African continent finally “coming to a wedding party” on June 11.

There were platitudes, too, from Deputy President Kgalema Motlanthe, KwaZulu-Natal Premier Zweli Mkhize and South African Football Association (Safa) president Kirsten Nematandani about the country’s state of readiness (90% to 95% there, by most people’s count) to host the tournament.

But the testing is in the tasting and the opportunity arrived a day later, when South Africa drew 1-1 with Namibia at Durban’s newly built R3,1-billion stadium. This would suggest that there are still many logistical issues for stadium managements and police to iron out.

Motlanthe had noted that “with the bricks-and-mortar work” of building stadiums completed, it was now time to focus on the “soft issues, like the movement of people”.

A missed opportunity
The controlled movement of people, especially around and inside the stadium, remains inadequate and a high priority. The signage for parking around the Moses Mabhida stadium is woeful and confusing. There were also none of the people-mover buses that would presumably be used to transport people from a parking lot about two kilometres away — a missed opportunity for fine-tuning.

Inexplicable temporary routing inside the stadium meant that those who had parked cars in the designated site to the south but had bought tickets in the north stand had a convoluted walk all the way around the edifice. The simple removal of some barricades would have reduced this journey by about 15 to 20 minutes.

It is a five-minute road-trip from the Mail & Guardian office to the stadium’s parking on a regular day. The time taken on Wednesday from the M&G to a stadium seat was about one hour and 12 minutes.

Inside the stadium there was a scrum at the food and beverage outlets. An aisle queuing system would obviate jostling, frayed tempers and beer splattered on punters.

In recognition of the global nature of the World Cup it would have been more inclusive if the signage inside Moses Mabhida was not solely in the English and isiZulu languages.

The national team was sloppy and lacklustre against minnows Namibia. Falling behind to a first-half goal from the impressive Maritzburg United striker Rudolf Bester, Bafana’s reputation was spared by Katlego Mphela’s 69th-minute goal.

Two players to last a full 90 minutes in coach Carlos Alberto Parreira’s last two teams have been attacking midfielder Teko Modise and Lamontville Golden Arrows’ Thanduyise Khuboni, who has been used as the midfield shield in front of the defence. They have experienced radically different fortunes.

Trying too hard
Modise has been off-colour for a while, despite his best efforts. During the Bafana training camp last month, he was a regular sight on the steep hills surrounding Durban’s city bowl, doing extra training, and there is a suggestion that he is trying too hard and should loosen up a bit.

Khuboni, however, again came in for praise from Parreira, who said his performance “was not a revelation but a confirmation” of the player’s ability to adapt “to playing the Brazilian way” in the midfield anchor position.

At both the post-match conference and the announcement of the 29-man squad to depart on March 7 for a month-long camp in Brazil Parreira emphasised the importance of the “experience” of his overseas players. He singled out the currently injured Kagiso Dikgacoi as an “asset who knows the [midfield volante] position and has the stature and positional sense to play there’.

Exciting inclusions in Parreira’s squad for Brazil are striker Kermit Erasmus, who is having a good season at Dutch club Excelsior Rotterdam, Pirates’ Andile Jali and Bloemfontein Celtic attacker Tlou Segolela, who looked sprightly as a second-half substitute against Namibia.

Parreira said the camp was “about building a foundation” to define and consolidate a South African footballing identity going into the World Cup. The emphasis would be on developing “our strengths: technique, keeping the ball on the ground and emphasising skill”.

Bafana Bafana are scheduled to play Brazilian club sides and an international friendly against Paraguay while in South America.

In the first part of our new series, we take a look at the goal that has played on loop in our heads and on TV channels for the last decade
Read more
Coronavirus

Streetlife over safety in shelters

In eThekwini a successful scheme is helping homeless people, but some say the lack of drugs to feed their addictions means it is better to stay away
Read more
Coronavirus

In Tshwane, forcing homeless people off the street resulted in chaos and the abuse of a vulnerable population. In Durban, a smooth, well-planned operation fared far better
Read more
Sport

It’s officially official, we will have no football in the country until further notice
Read more
Advertising
Continue to the category
National