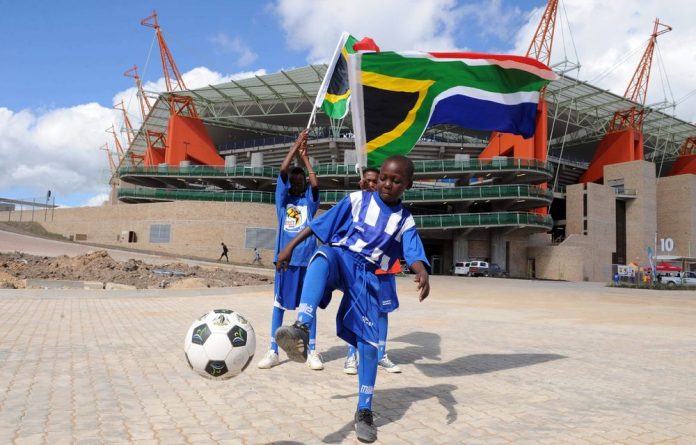 The World Cup stadium due to host the holders, Italy, is an arid dustbowl 97 days before the tournament kicks off, after two attempts to grow grass have failed at the new R1,2-billion Mbombela Stadium in Nelspruit, raising fears that the pitch will not be ready by June.

When World Cup officials on a tour of South Africa’s showpiece venues arrived at the ground last weekend, they were confronted with a brown sandpit colonised by dozens of birds.

They now face a race against time to get the stadium ready for the first game between Honduras and Chile on June 16, followed by Italy against New Zealand on June 20. There is local speculation that another pitch failure could force Fifa to switch the fixtures to a different venue.

Conflicting official explanations of what has gone wrong served only to sow confusion on a tour of nine cities. Ronnie Moyo, a 2010 marketing and events manager who gave a guided tour of the Mbombela Stadium, said the original pitch was removed in December after failing a Fifa inspection because “25% of the pitch had clay soil”.

“In January we put in some Norwegian grass and realised it was no good,” he said. “So the third one will go back to the original. We’re starting tomorrow and it should take only two weeks.”

Asked how the blunders happened, he replied: “When you put people under one roof they tend to recommend different things.”

But later a different version of events claimed there had been only one failure so far. Richard Hayden, a Fifa pitch consultant, said: “The decision was made that the pitch was potentially very good but the extra 15% to 20% [in quality] was not there. In seven or eight weeks you will have a state-of-the-art pitch. This is the second attempt at the pitch. I’m not aware of Norwegian grass being used.”

Asked to resolve the discrepancies between accounts, Danny Jordaan, the chief executive of the World Cup organising committee, said: “I should advise you to use information from the specialist, not what you heard in the corridor. Who do you believe, a heart surgeon or a tour guide?”

But Moyo, the tour guide, stuck to his guns and said people could get “sensitive” about the issues.

The pitch saga is causing disquiet in Nelspruit.

The Lowvelder, the local newspaper, said of a friendly between Ghana and Bosnia-Herzegovina that was due to take place at the stadium on Wednesday, but was changed to Sarajevo instead: “The only sport that could possibly be played on the stadium surface today, or next Wednesday, is beach volleyball.”

Comparing the playing surface to a dry riverbed, it said: “Surely there must be serious concern that if we do not get the pitch ready within the next three or four weeks, Mbombela [Nelspruit] will be in danger of losing its host-city status.” —