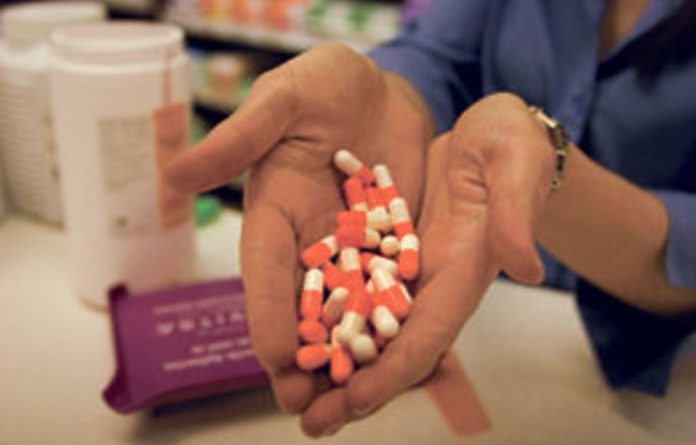 ‘It’s so easy to justify. You say: ‘My doctor gave it to me. I have a colon disease.’

But nobody told you to inject yourself with pethidine in the bathroom,” said former addict Tanya Joselowsky. Her story is not the typical tale of illicit drugs and inevitable criminal activity.

A housewife and mother of three, Joselowsky became addicted to the morphine-derived drug when she developed ulcerative colitis, a colon disease. She went from using one ampoule of pethidine a week to one a day.

After entering rehab and relapsing, she became ‘cross-addicted” to cocaine. ‘You feel better than a junkie because it’s been prescribed and it’s legal and that makes it okay,” she said.

But in retrospect, she said, she was no different from any other addict. ‘My life was just as unmanageable on prescription drugs as it was on cocaine,” said Joselowsky.

Dan Wolf, a registered psychologist and director at Houghton House rehab centre, said it’s often harder to get people who use prescription drugs — which are legal, inexpensive and easy to acquire — to accept that they have an addiction.

‘It’s difficult for people to realise that they have a problem when their dealer wears a white coat and went to university,” he said.

Despite regulations set out by the Medicine Controls Council, prescription drugs are easy to access.

‘I got 100 ampoules of pethidine from a drug dealer, not a pharmacist. He said he worked at the place where they manufactured the drugs in Port Elizabeth,” said Joselowsky.

‘That was cheap. It was R700 for all of it. Cocaine was R300 a gram.” If you have the right prescription, you don’t even have to pay for it yourself. ‘When street drugs are hard to find, your medical aid will fund your addiction,” she said.

Prescription drug abuse usually flies under the radar, but the recent deaths of famous entertainers, such as Heath Ledger and Michael Jackson, have brought the issue into the spotlight.

In its annual report, released last week, the International Narcotics Control Board called for urgent action to stop the growing problem of prescription drug abuse.

As most research on the issue is done through treatment centres, it fails to penetrate into rural areas or to address those prescription drug addicts who try to overcome the problem with the help of a GP.

Plüddemann said people who succumbed to prescription drug addiction were usually older, between 35 and 40, and more than 60% of them were female.

Sedatives, such as benzodiazepine, and painkillers, such as codeine, were the most commonly abused drugs, but many people also abused weight-loss tablets, which contain amphetamines, and over-thecounter painkillers.

David Bayever, deputy chairperson of the Central Drug Authority, said it’s easier for people addicted to prescription drugs to fly under the radar. Because the drugs are pure and their manufacture is regulated, it’s easy for users to understand their tolerance and monitor their dosage, he said.

But for all their purity, prescription drugs can be just as dangerous as illicit drugs. ‘They can cause kidney damage, suppress breathing and can result in a lack of consciousness. [The users’] normality relies on the taking of that drug and if they don’t take it, they suffer withdrawal symptoms,” he said.

For Bayever, one disturbing element of the International Narcotics Control Board report is that prescription drug abuse is starting to show up among younger people, aged between 15 and 18. ‘[They] either demand the drugs [from doctors] or they share their parents’ — My suspicion is that the same thing is happening here,” he said.

Joel Regenbaum got hooked on prescription drugs when he was just a boy. ‘I started as a kid, at 12, with very bad migraines. They used to inject me with morphine and pethidine,” he said. In the beginning it was all legitimate.

Not wanting to be pricked and prodded any more, Regenbaum asked the doctor to prescribe something oral. The doctor prescribed Stopain.

‘We were all ignorant about drug abuse, especially prescription drug abuse. Our main object was to get rid of the pain,” he said.

Once he was self-medicating, it was easy to fall into the trap of taking three or four tablets instead of one, or of self-medicating proactively just in case he got a headache.

Early on, his parents paid for the medication they thought their son needed, but later in life Regenbaum resorted to subterfuge. ‘Instead of one, I’d see two doctors and a dentist.

Instead of one pharmacist, it was three,” he said. If he became desperate, he’d steal prescription pads and forge doctors’ signatures.

In his 20s Regenbaum was taking 20 Stopain a day, as well as sleeping pills and sedatives. Though doctors sent him for a battery of tests, it was easy to fool them. ‘Pain is something that you can’t deny so a doctor can’t really say that you’re lying,” he said.

Bayever said one of the warning signs doctors should look out for is when patients ask for a specific drug during consultation, rather than for medication for an ailment.

Return visits and requests for early repeats of prescriptions are another warning sign. He said although the laws in place are adequate, there is room for a better mechanism to monitor sales.

The idea of a national IT mechanism or smartcard system has been bandied about, but there are serious cost implications for implementation.

But Plüddemann quest ioned whether prescription drug abuse would ever reach the top of the agenda in the South African context.

‘In the US it has become a priority, but whether we’ll get there any time soon — with alcohol, dagga and, in the Western Cape, tik being priorities — I don’t know,” he said.