End of the dumb war 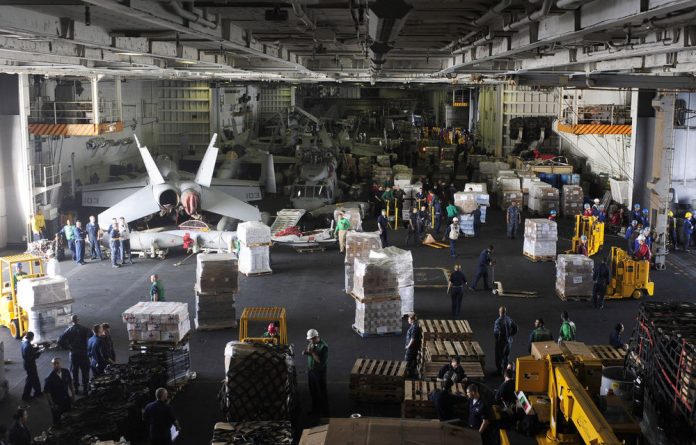 Each night, on a giant base north of Baghdad, a team that moves armies for a living prepares for a mission that will define the United State’s seven-year expedition in Iraq.

Leading them is the senior US officer who will orchestrate the military withdrawal, who claims he has one of the highest job satisfaction levels in the country.

“I have the best job in Iraq right now,” said Brigadier General Paul Wentz, of the US military’s 13th Sustainment Command.
Whether that assessment reflects the fraught earlier years of the occupation, or the imminent end of an increasingly unpopular war, or the fact that his staff have prepared so well that they can’t fail, is open to conjecture.

Whatever, the men and women of the command are raring to begin the biggest movement of troops and machines anywhere in the world since Vietnam, more than 40 years ago.

The order to do so will probably come within 60 days of a result being declared in Iraq’s general election. The count of votes is painstakingly slow — only 65% of ballots had been counted more than a week after the March 7 polling day. But if, as US President Barack Obama hopes, the result is deemed credible, the US commander-in-chief, Ray Odierno, will call an end to the war that he has described as “dumb”.

As soon as Wentz receives the call a massive network of trucks, planes and ships will start to evacuate 45 000 troops and more than a million tons of equipment, from super-size bulldozers and water coolers to weapons.

The pull-out looms as a payday for the Iraqi army. Late last year the US government set a cap of $30-million [R222-million] worth of equipment that commanders can leave at each facility — a fifteenfold increase from when guidelines were written five years ago.

The withdrawal will leave just 50 000 US troops in Iraq by August 30, none of them in combat roles, and reduce the number of bases from 290 to fewer than 10. Even with the remaining US presence, the withdrawal will probably be perceived, in Iraq and elsewhere, as the final act of the war.

It is a milestone Wentz is acutely aware of. “This will be a chapter in history and we will really try to make sure it’s a good one,” he said from an anteroom on the giant Balad airbase, near where his charges are still co-ordinating the movements of more than 3 000 US vehicles throughout Iraq each day. “Success for us will be if we wake up in September and nobody knows we have gone.”

That may be the benchmark inside Iraq, where people long ago started to rail against the enormous, slow-moving US convoys that snarl traffic and the often interminable delays at checkpoints manned by US soldiers.

But in the US another indicator is more important — not repeating the mistakes of the previous US withdrawal from Iraq in 1991. That pull-out, blighted by delays, equipment losses and incompetence, is seen as a case study of how not to do things.

“We have learned a lot since then,” said Wentz. “We don’t have those Indiana Jones warehouses that nobody knows what’s inside.

“A lot of the bad things that came out of the first Gulf War have been fixed. We’ve introduced a lot of technology. This is very important to the American taxpayer — we have to be fiscally responsible and good stewards of government money.”

Although most of the heavy lifting is yet to begin, tanks and giant military trucks known as MRAPs are already on the move in a preparatory exercise dubbed Operation Clean Sweep. Some of the pieces are leaving Iraq with the units they arrived with, while others are being readied for another war.

“The equipment will be going south and will most likely be reworked in Kuwait and sent to the folks in Afghanistan,” said Wentz.

“Some of the containers will go out through the ports of Aqaba in Jordan and Umm Qasr. Each month we’re getting rid of more and more capacity but, so far, they are largely component parts that have built up over the years.”

Most troops will fly to Kuwait, where they will connect with a well-established military flight network back to the US. Iraq’s main roads are safer now, but the military still prefers to keep as many troops as possible away from the 10-hour drive south to the neighbouring state.

The four-lane sealed highway down the spine of Iraq, known as Route Tampa, was built by Saddam Hussein to move his troops and machines to the Iranian front and home again. It also gave him a direct route to Kuwait.

The US and British armies used Route Tampa to get to Baghdad in 2003 and US convoys have used it ever since, despite being extensively targeted by militants who launched ambushes and detonated countless roadside bombs from sand berms that line the roads.

Captain Jason Vivian from the 80th Ordinance Battalion is in charge of clearing the yard on the Balad base, which will become one of the busiest hubs in Iraq when Odierno’s move order comes. To him, getting the withdrawal rolling is the pinnacle of a career.

“This is why I joined the military,” he said, standing between cranes and rows of heavy armour. “The surge and the invasion were both important, especially for a logistician, but this to me is what it’s all about.” —