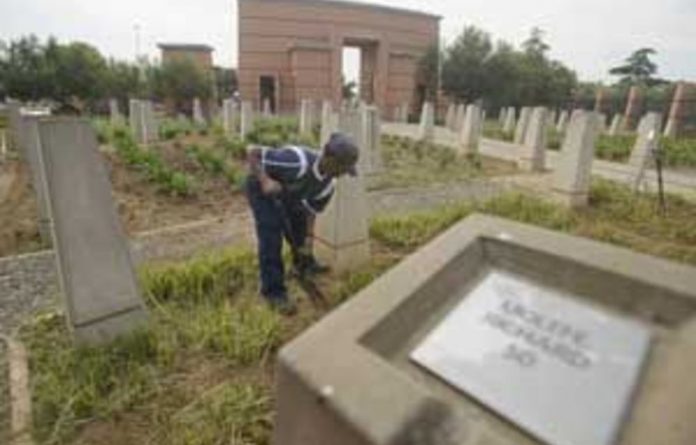 The muddy road leading to the Makiti household at 1 844 Mofolo Avenue, Sharpeville, was thick with journalists this week.

Emerging from his facebrick house, a bespectacled Ike Makiti (67), a former Robben Island political prisoner and survivor of the Sharpeville massacre, leads us into his modestly furnished lounge, announcing that “even more” journalists are expected to arrive to interview him.

Makiti gets straight to the point of the story he has told many times since March 21 1960. But it still makes him weep.

“The shooting only lasted for about 15 minutes under a dark cloud above us. As dead bodies lay strewn like piles of rubbish in front of the old police station, it rained so heavily, washing away the blood, people’s brains … to me, the rain signified a new beginning for us,” he says, his speech punctuated by sobs.

On that morning, says Makiti, about 20 000 residents, old and young, converged in front of the police station gates. They were waiting for a response from the police to a letter from Pan Africanist Congress leader Robert Sobukwe notifying them about the march against the pass laws.

“The answer came in the form of a bullet … all I heard was the rat-a-tat-a-tat of machine guns, and then the wailing of ambulance sirens, and a red helicopter which flew surprisingly low.”

Afterwards, Makiti fled to Lesotho, where he was arrested and sent to Robben Island. There he served a five-year jail term for furthering the aims of a banned political organisation.

Fifty years later, Sharpeville’s gravelled streets have barely changed — except now they have more potholes. Sixteen years into the new democratic dispensation, the town where blood flowed in freedom’s name carries the makings of a slum.

Only three roads have been tarred since 1994 and two schools were recently closed down. There are no sports facilities. The famous George Thabe Stadium, where the Constitution was signed in 1996, is a neglected hulk. Residents complain of non-existent municipal services and corruption. Unemployment and crime continue to rise.

The police have changed, the issues have changed, but the effects remain: for most who live here, quality of life and basic rights are severely compromised.

Another bitter irony: nothing happens in Sharpeville until Human Rights Day approaches.

“It means this township is good for the 21st of March, and nothing else,” Mosesi says.

When we visited Sharpeville just days before the 50th anniversary, the streets buzzed with municipal workers painting faded road markings. At the old Phelandaba cemetery, more workers, diggers and steamrollers prepared the area where a monument was erected in memory of the victims of the march. It stands near their graves.

Mosesi and others are pushing for Sharpeville residents to drive the March 21 commemoration.

They met the Gauteng provincial government this week to voice their unhappiness.

“I do not even know who is coming here because I’m not interested. His [Deputy President Kgalema Motlanthe] coming here will not change our lives.

“We are still struggling, we are still protesting and we are still burning tyres … At some stage, hell is going to break loose and we do not know when.”

At a luncheon organised for the survivors of the massacre by the Sedibeng district municipality and held this week at the Vaal Technorama Museum, many dug into painful memories.

Ziphora Maleho (76) was pregnant then. She was shot in the leg. As she lay in the dust and in the rain, she recalls: “An Afrikaner policeman came to me and said, ‘How does it feel to have your Africa now?'”

Piet Tshabalala (86) still tosses and turns at night, thinking of the harrowing events of that day.

“Something hit me on the leg and I saw blood. The pregnant woman next to me lay in a pool of blood after being shot in the stomach … We could see parts of her unborn twins falling out.”

Back at Makiti’s house, the elderly man’s tears finally turn into a smile as he recalls a song taught to him by the late Zephania Mothopeng, former PAC president, in jail. His face lights up and he sings: “Izwe lethu … Unite Ma-Afrika, unite Ma-Afrika, and rally behind the banner of Afrika.”

For some residents of the township where tragedy and history mingled, Sharpeville Day, as it is popularly known, is “just another boring holiday”. For others, it is an excuse for the ruling ANC to hijack the agenda.

In recent years the official commemmorating of the events of March 21 1960 (Human Rights Day) has become a political celebration that, according to Sharpeville resident Kgosi Manyathela, is a “continuous failure to reflect the truth”.

He says the ANC uses its political muscle and ruling party status to steal the limelight from the PAC.

“The ANC hosts big parties on this day at the George Thabe Stadium and there is never a mention of [PAC founding president] Robert Sobukwe … the person who started all this.

“A few PAC members and leaders usually converge on a patch of land on the outskirts of the township,” he says.

Just off the busy Seiso Road is the Memorial Precinct which includes a park and houses a permanent exhibition to mark the day.

A dramatic display of black-and-white photographs of the massacre and its aftermath drape the wide walls — men fleeing from the police on bicycles, bodies being carried to safety and a lone picture of a smiling Sobukwe moments before he handed himself over to the police in Orlando, Soweto.

Hashtags bear a strange fruit: The visual terror of the #PhoenixMassacre