Netanyahu says progress in US talks 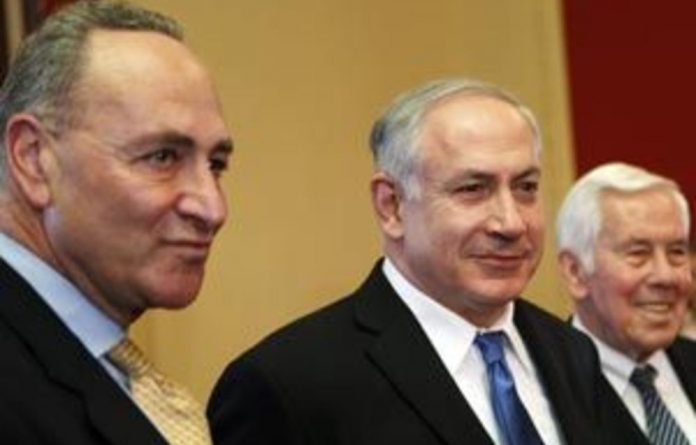 Israeli Prime Minister Benjamin Netanyahu ended a troubled United States visit on Thursday, saying progress had been made toward settling a dispute with the White House over Jewish housing construction in occupied East Jerusalem.

“We think we have found a golden way that would allow the Americans to move the peace process forward while preserving our national interests,” Netanyahu said just before boarding a plane to fly back to Israel early on Thursday.

In a flurry of meetings throughout Wednesday, US and Israeli officials scrambled to put together a package of goodwill gestures that President Barack Obama hoped could persuade Palestinians to return to peace talks.

Israeli sources had said Netanyahu could not finalise any confidence-building measures until he presented them to his Cabinet. He leads a coalition government dominated by pro-settler parties, including his own.

Nir Hefez, a spokesperson for Netanyahu, said a group of seven senior Israeli cabinet ministers would convene with Netanyahu in Jerusalem late on Thursday to discuss the package of confidence-building measures.

He did not give details on the measures to be discussed.

Palestinians have demanded a complete settlement freeze in East Jerusalem and the rest of the West Bank, areas Israel captured in a 1967 war.

Netanyahu has cautioned that accepting their terms for reviving negotiations, in the format of US-mediated, indirect talks, could put peace efforts on hold for another year.

Building confidence
“The president asked the prime minister to take steps to build confidence for proximity talks so that progress can be made toward comprehensive peace,” White House spokesperson Robert Gibbs told reporters, referring to indirect negotiations.

In a sign of a deep rift over Israeli settlement policy, the Obama administration withheld from Netanyahu some of the usual trappings during a White House visit on Tuesday.

Press coverage of his Oval Office talks with Obama was barred, and the leaders made no public statements afterward.

U.S. officials have tried to get Israel to agree to suspend further Jewish home construction in East Jerusalem and to consent to discuss core issues such as borders and the status of Jerusalem in the US-sponsored proximity negotiations.

Netanyahu has pledged not to curb Jewish housing in East Jerusalem, saying he enjoyed wide public support in Israel for that policy, followed by all Israeli governments since 1967. The US opposes such construction, saying it could prejudge a final peace agreement with the Palestinians.

Citing biblical and historical links, Israel regards all of Jerusalem as its capital, a claim that has not won international recognition. Palestinians want East Jerusalem as the capital of the state they hope to create in the West Bank and Gaza Strip.

Expansion continues
Undeterred by turbulence in US-Israeli relations, Israel on Wednesday confirmed plans for a further expansion of the Jewish presence in East Jerusalem, with more building approved.

Gibbs said US officials were seeking clarification after a Jerusalem city official, in a move that angered Palestinians, said final approval was given to develop a flashpoint neighborhood from which Palestinians were evicted last year.

US and Israeli officials have sought to get relations back on track after a separate plan to build 1 600 homes for Jews in Ramat Shlomo, a settlement on West Bank land that Israel annexed to Jerusalem after the 1967 war, was announced two weeks ago during a visit by US Vice President Joe Biden.

The housing dispute touched off the worst diplomatic feud between Washington and Israel since Obama took office last year.

Netanyahu said he was blindsided by bureaucrats and Israeli officials pointed to what they described as the difficulty of monitoring all of the local-level planning and approval stages of settlement projects in Jerusalem.

As part of the housing project that made headlines on Wednesday, 20 units are due to be built at the site of a defunct hotel in the Sheikh Jarrah neighborhood of East Jerusalem, an area where a US millionaire has been buying property for settlers.

Hefez said in a statement on Wednesday that the decision to issue building permits was first made last year and that “Jews and Arabs can buy and sell freely private property and homes in all the city”.

Netanyahu excluded occupied area in and around Jerusalem in a 10-month moratorium he announced in November in new housing starts in West Bank settlements. Palestinian President Mahmoud Abbas said the partial freeze was insufficient. — Reuters