Is he a hard hat or a prophet? 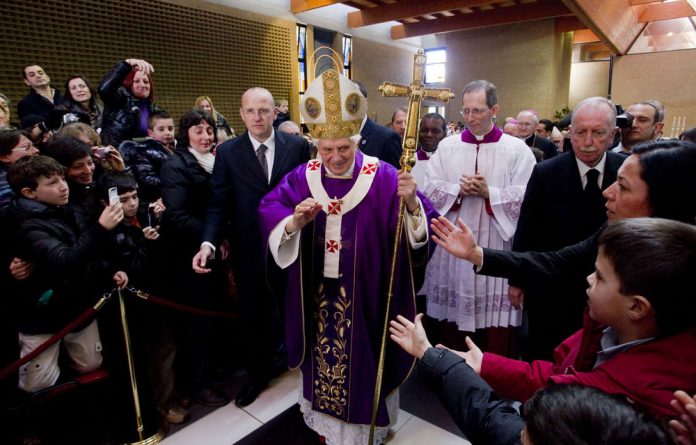 On the opening evening of the Second Vatican Council in 1962, thousands of Romans poured into St Peter’s Square in a torchlight procession. Called to the window of his study by the multitude, John XXIII said: “Returning home, you’ll find the children. Give them a caress and say: ‘This is the caress of the pope.'”

Forty-three years later, on the night Benedict XVI was elected, a text message hurtled between cellphones as the crowds dispersed from the same square. “Returning home, you’ll find the children,” it read. “Give them a belt round the ear and say: ‘That’s from the pope.'”

In the five years since it has become clear that the daunting reputation the former Cardinal Joseph Ratzinger brought into office as “God’s rottweiler” was, in many respects, misleading.

A man less likely to cuff a child would be hard to imagine — although, as the latest and biggest scandal to rock his papacy has revealed, his choirmaster brother was not above cuffing choristers.

Last Saturday Benedict tried to put the lid on that scandal with a letter to the Catholics of Ireland apologising for the “sinful and criminal” abuses of children, a saga that began last May when the 2600-page Ryan Report found that priests and nuns had terrorised children for decades in hundreds of church-run institutions.

Using language rarely heard from popes, Benedict said he was “truly sorry”. But he left many feeling that he could have been bolder.

As the scandal over clerical paedophilia spread through Europe, senior Vatican officials suggested it would be diplomatic for him to extend his letter to include countries other than Ireland.

But terms such as “diplomatic” and “media impact” have little relevance for Benedict. He stuck to his plan, with the result that Catholics in the Netherlands, Germany, Austria, Switzerland and Italy feel he does not care about similar outrages revealed in their churches.

Emotions in Germany are running particularly high about the silence of the first German pope for almost 1 000 years.

The affair highlights two characteristics of this most paradoxical of pontiffs: his timidity and his stubbornness. Benedict has a soft, plump handshake and a tendency to cast his eyes downwards as you speak to him — a shyness that, associates say, goes hand in hand with genuine humility. He is also a temperate man; his favourite drink is said to be fresh orange juice.

Other than theology and philosophy, the pope’s main known enthusiasms are for classical music (he is an accomplished pianist) and cats — which also seem to have a fondness for him.

“In private he is more informal than you might expect,” says Marcello Pera, an Italian senator who collaborated with Benedict on a book. “He loves to talk and cast off his [official] role.”

However, one subordinate describes him as “bloodless” — and, certainly, his fame as the late John Paul II’s “enforcer” was not unearned.

For 24 years before becoming pope, Benedict was head of the Congregation for the Doctrine of the Faith (CDF), the Vatican department once known as the Inquisition, the main task of which is to ensure that theologians licensed to teach in Catholic institutions keep within doctrinal bounds set by Rome.

In his biography of Benedict John Allen recounts a chilling episode. In 1986 the American theologian Charles Curran, suspected of straying on birth control, met Joseph Ratzinger in the CDF’s offices in Rome.

When Curran argued that his approach fell within the current theological mainstream, Ratzinger asked him to name like-minded thinkers. When Curran did so, Ratzinger asked if Curran would like to accuse them, “because if so, the Congregation would be happy to open an investigation”.

This partly explains why a man as mild as Benedict has upset more people than perhaps any pope in history.

His most notorious gaffe came in 2006 in a scholarly lecture at his old university at Regensburg, when he quoted the 14th-century Byzantine emperor Manuel II saying that Muhammad had brought “things only evil and inhuman”.

He then dismayed protestants by signing off on a document that relegated their churches to mere “ecclesial communities”; outraged indigenous representatives in Latin America by insisting that evangelisation in the New World did not represent “the imposition of a foreign culture”; and angered Jews by setting the controversial wartime pope, Pius XII, on the road to beatification. Last year he appalled many Catholics by agreeing to lift the excommunication of four breakaway, ultra-traditionalist bishops, one a Holocaust denier.

“I’m like the cellist Rostropovich,” Benedict apparently told a friend. “I never read the critics.”

His self-belief is formidable. “He’s shy — almost timid — but when he thinks it’s his duty, he can’t be moved from saying what he feels,” says Italian philosopher Rocco Buttiglione.

It is Benedict’s bluntness — especially on Islam — that endears him to admirers such as Buttiglione. “There is so much ecumenism that is the exchange of meaningless words. Sooner or later we must get to grips with the real issues of Islam,” he says. Benedict’s Regensburg lecture helped to do that by “provoking a real dialogue”.

Several initiatives have since been launched from the Muslim side and, two years ago, representatives of 138 scholars who signed a response — the Common Word declaration — met the pope at the Vatican.

As the latest crisis has shown, though, Benedict’s candour does not go hand in hand with swift, decisive action. He might have regained much ground in Ireland by removing the Irish primate, Cardinal Sean Brady, after he admitted involvement in a shameful cover-up in the 1970s. Yet Brady is still there.

Unlikely as it may seem, Benedict was once regarded as liberal, even radical. As theological adviser to Cardinal Joseph Frings, archbishop of Cologne and a decisive figure at the Second Vatican Council, he played a key role in awakening his church from centuries of reactionary slumber.

Like many young Catholic theologians, he embraced the council’s support for ecumenism, enthusiasm for dialogue with other religions, adoption of a liturgy in which worshippers could participate more actively, and increased autonomy for national bishops’ conferences.

In 1966 he wrote a book, Theological Highlights of Vatican II, described as “absolutely brilliant”, by a leading British Catholic who, such is the atmosphere in today’s Catholic church, asked not to be identified. “I’ve never seen the spirit of the council better exemplified. It’s very moving. You feel this is a man on fire.”

By 1972, however, the flames kindling Ratzinger’s intellect had changed. Europe had been shaken by student protests that began on the streets of Paris and raced across the continent to the tranquil university town of Tubingen.

Its revolutionary implications profoundly alarmed Ratzinger, then 41 and a professor of dogmatic theology, and the following year he fled for Regensburg, in his more traditionalist native region of Bavaria.

Buttiglione visited him there as part of a delegation from an emerging Catholic lay movement, Communion and Liberation, whose young members aimed to offer an alternative to the maverick student Marxism of the “68ers”. Now Ratzinger was one of their idols — having embarked on a process of intellectual change that would see him question many important decisions of the Second Vatican Council.

Ratzinger and his supporters insist he has remained theologically consistent, but the Catholic author John Cornwell disagrees. “He has not been a great champion of respect for other religions. He has not been a champion of giving a greater say to bishops, and nor has he supported the liturgy of participation — his own enthusiasm being for the Tridentine Mass,” normally said in Latin.

The man who once wrote so movingly about the council’s embrace of the 20th century has become the pope who, Cornwell notes, “gave a bishopric to an Austrian priest who preached that Hurricane Katrina was a retribution for the sinfulness of New Orleans”. But Benedict’s supporters argue that to see him purely as a conservative is to do him an injustice.

“It would be interesting to know how he is viewed in 100 years’ time,” muses a Vatican-watcher who also requested anonymity.

“Benedict may be behind or ahead of his time, because he certainly isn’t of his time.”

Mistrust of the zeitgeist is one of Benedict’s outstanding characteristics. Among his favourite scripture passages is Romans 12:2: “Do not conform any longer to the pattern of this world, but be transformed by the renewing of your mind.”

His position on several issues is more left than right.

He condemned the invasion of Iraq and deplores the death penalty as well as abortion. And the anti-free market stance of his most recent encyclical, on social and economic questions, came as an unwelcome revelation to his American neocon admirers.

The few cardinals who have published books with lay writers have chosen unimpeachably orthodox Catholic journalists or academics. Yet Ratzinger teamed up with Pera, a former socialist of the party of Italy’s divorced and secular prime minister, Silvio Berlusconi, who once said: “I can’t say I’m a believer.”

What brought them together was a shared belief in one of the key ideas in Benedict’s intellectual make-up, which many would not associate with the Catholic Church. It is that many of the most treasured “Western” values are inextricably bound up with Christianity and threatened by its decline. —