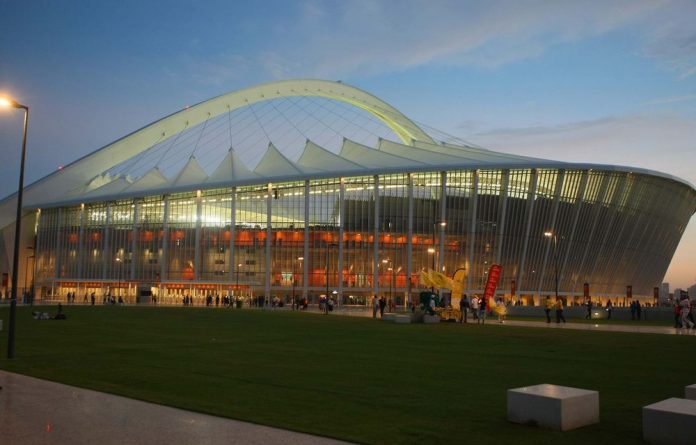 The Telkom Knockout semifinal featuring Soweto giants Orlando Pirates and Kaizer Chiefs will be played on Easter Monday at the Moses Mabhida Stadium. Kick-off is at 3pm.

The other semifinal between holders Ajax Cape Town and AmaZulu will take place at Bloemfontein’s Seisa Ramabodu Stadium on Saturday at 8.15pm.

The venues were released by the Premier Soccer League on Monday night.

The Soweto Derby is expected to attract a capacity crowd of over 50 000 to the Moses Mabhida Stadium which is one of the new stadiums custom build to host the Soccer World Cup which kicks off in June.

Both clubs were happy with the arrangement: Said Amakhosi coach Vladimir Vermezovic: “It does not matter where we play. We have played both games in the Knockout away from home so I am not worried about the venue.”

A sell out crowd of 28 000 at Atteridgeville’s Super Stadium on Sunday saw Chiefs beat Mamelodi Sundowns 1-0 much more easily than the score suggests and that means Amakhosi start as slight favourites to beat their arch rivals for the first time this season when Durban fans are treated to a bonus Soweto Derby.

Both Absa Premiership matches the two Soweto clubs have ended in 0-0 draws.

But on Monday if scores are level extra time and if necessary a penalty shootout will decide who plays in the final.

AmaZulu are the surprise package in the other semifinal after defeating Premiership champions SuperSport United 4-1 on penalties after the teams were tied 2-2 after extra time in their clash at the Super Stadium on Saturday.

Playing in Bloemfontein and at the home of the best supported club after Chiefs, Bloemfontein Celtic, was an inspired move by the cup committee and PSL. The Bloemfontein fans have shown over the years to be true supporters of local soccer and both Ajax and Usuthu can expect a bumper turnout on Saturday night in the middle of the Easter weekend. — Sapa