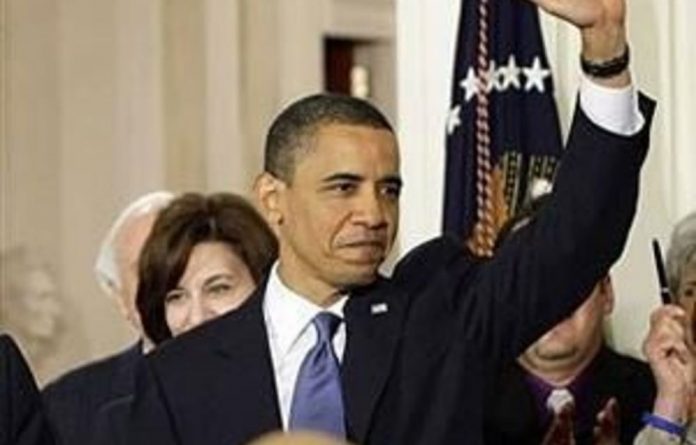 Under the new Strategic Arms Reduction Treaty (Start), the former Cold War foes will be allowed a maximum of 1 550 deployed warheads, about 30% lower than a limit set in 2002.

It also imposes limits on the intercontinental ballistic missiles needed to deliver the warheads.

Agreed after months of hard bargaining, the two presidents signed the treaty in the renaissance Spanish Hall of Prague Castle.

Following private talks, Medvedev and Obama sat side by side to sign the treaty, which was also a major step in their efforts to “reset” often strained relations.

Obama called it “an extraordinary event” and an “important milestone” for attempts to restrict nuclear arms as well as US-Russia relations.

He called the treaty “one step on a longer journey … this treaty will set the stage for further cuts”.

Obama said the two nations, which between them have more than 95% of the world’s nuclear arms, had to show “responsible global leadership”.

It was in the Czech capital exactly 12 months ago that Obama gave a keynote speech committing the US to the aim of a world without nuclear weapons.

He reaffirmed his comment from a year ago that disarmament was “a long-term goal, one that may not be achieved in my lifetime”.

The treaty was signed in a key year for efforts to contain nuclear proliferation, with the international community struggling to persuade North Korea to disarm and to restrict Iran’s nuclear drive.

Obama this week announced a new US nuclear posture under which the US would not stage an atomic attack against a country that does not have nuclear weapons. Though he pointedly said that this would not include Iran or North Korea.

The US leader is to host a nuclear security summit in Washington next week and a nuclear Non-Proliferation Treaty (NPT) will be held at the UN headquarters in New York in May.

In a new warning to Iran over its nuclear actions, Obama said the US and its allies “will not tolerate actions that flout the NPT”.

If ratified by the US Senate and Russia’s Parliament, the new treaty will replace the 1991 Start, which expired last December.

Both the United States and Russia also have thousands of nuclear weapons that are not officially deployed and are kept in stockpiles.

Bogged down
The treaty negotiations became bogged down by various disagreements, particularly over US missile defence plans that Russia opposes. Obama said the two sides had agreed to step up talks on the US defence plan for Europe.

The new US-Russian treaty will have broad implications for global security, Medvedev said shortly after he arrived in Prague on Wednesday night.

China on Thursday urged the US to reduce its nuclear arsenal and pledged it would never instigate an atomic war, in a response to the new US nuclear policy unveiled this week.

“We firmly pursue a nuclear strategy that is defensive in nature. We adhere to a policy of no first use of nuclear weapons under any circumstances and at any time,” she said in Beijing. — AFP